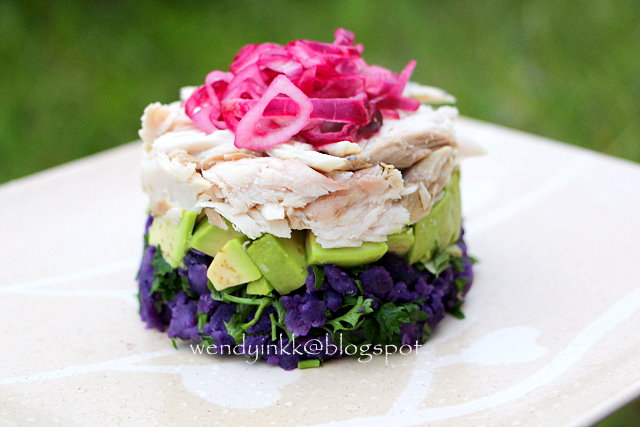 Tuna is a common fish in Malaysian cuisine. The local tuna is smaller in size than the ones we eat in Japanese restaurants or those found in colder waters. The local tuna is known as ikan tongkol and it's not an expensive fish to consume. There is another fish that looks almost the same, known as ikan kayu, and I wasn't able to distinguish between the two, until the fish monger placed them side by side. The local tuna, ikan tongkol's skin is actually bluish, looks pretty when the sun shines on it.

Ikan kayu has a much larger bloody area when cooked, tastes more fishy and has a drier texture. 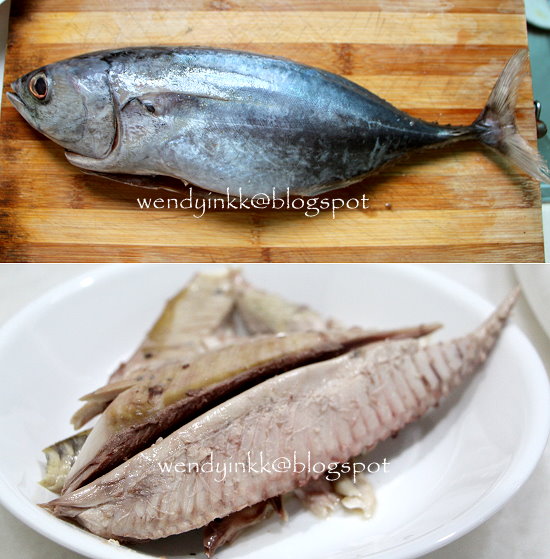 Ikan tongkol is not well researched as it not a popular fish out of this region due to it's bloodiness. There is a large area that is dark brown and smells really fishy and bloody. If you can stand the smell, consume it, if not, discard it. If I were to cook curry with it, I'll just leave it intact. I do know of many friends who don't like eating this fish.

This time, I saw a nice firm fresh ikan tongkol at the Farmer's Market in town. I can't bear not to buy it. Too tempting. Instead of cooking curry with it, I made a salad with it. It was really sweet and if you want to keep it tender, don't over cook it.

Actually, we had a heavy steamboat dinner the day before, so this will be a good choice for today's dinner, hahahaha!

You can try this with other fish, if you like, or chicken, or prawns. 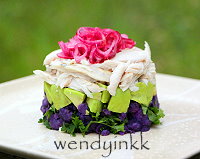 Clean the tuna and rub with 1/2 tsp salt. Steam for 10 to 12 minutes or  until the fish is cooked. Let the fish cool down and remove the flesh, in chunks. Discard bones, dark brown parts and skin. If there is clear fish liquid in the plate after steaming, and if it doesn't taste fishy, pour it over the fish flesh to rehydrate.

Boil purple potatoes until soft and let them cool down. Peel away the skin. On medium low heat, melt butter in a pan, put the peeled potatoes into the pan, sprinkle salt over and press them to break into chunks. Mix  around and make sure the potatoes are well buttered. Taste and adjust saltiness. Let the potatoes cool down and mix with parsley

Mix everything together and let it sit for around 30 minutes to a few hours.

Final Assembly.
2 Avocadoes, cut into cubes
All the tuna
All of the pressed potatoes
All of the shallot dressing

Put potatoes on the base, top with avocado. Tear fish chunks into preferred size. Top with some shallot dressing. 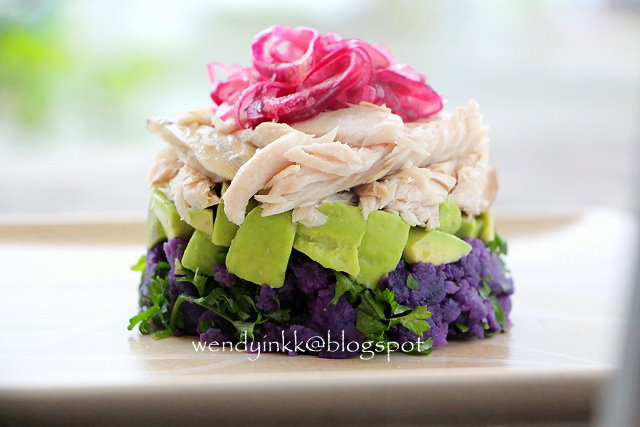