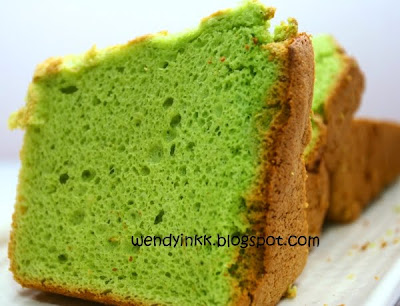 I decided to try making a pandan chiffon w/o baking powder and w/o oil.

Not that it doesn’t contain oil at all, but I’ve added more coconut milk to it, and coconut milk contains coconut oil. 

I’ve whacked the egg yolks too this time, and it gave me a tall cake, even w/o baking powder. I’ve tried making pandan chiffon with and w/o baking powder before, using the regular chiffon method. And I found that the one w/o is slightly softer and less tall compared to the one using, which had better structure and taller.

I’m happy with the result of this cake 

1. Preheat oven to 170/180C.
2. Combine coconut milk and pandan juice. Mix with flour until a smooth batter is formed. Set aside.
3. Beat egg whites until frothy, add in cream of tartar, beat until egg whites are at medium peaks.
4. Add in 100gm sugar gradually and beat until stiff peaks.
5. In another bowl, beat egg yolks and 100gm sugar until thick and pale (colour of cold butter).
6. Fold egg yolks into batter.
7. Fold 1/4 of egg whites into yolk batter, and another ¼.
8. Pour yolk batter into remaining egg whites and fold well.
9. Pour into a 25cm tube pan and bake for 45 minutes.
10. When cake is done, immediately remove from oven and invert to cool.
11. When cake has totally cooled down, remove from pan. 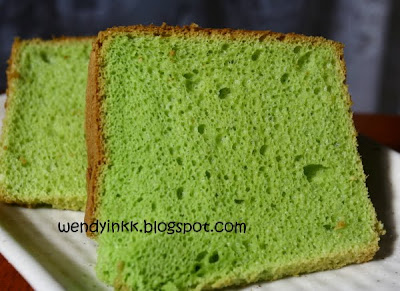 The colour's slightly different here due to the tinted window using natural light. The picture above is taken using bounced flash indoors.


See my 2nd attempt with this recipe here.
Posted by WendyinKK at 9:32 PM 59 comments: 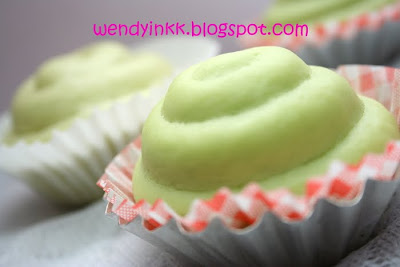 The picture above is before they were steamed.
The picture below is after steamed. The green colour toned down quite a lot. 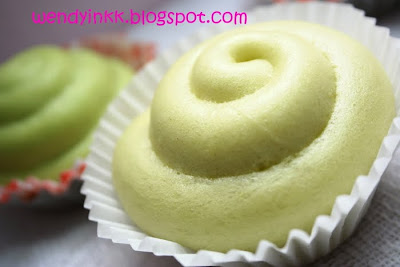 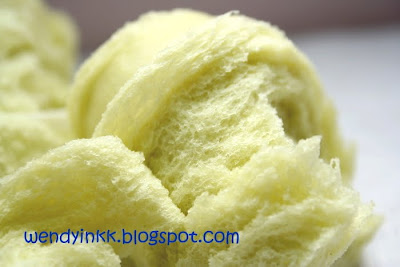 1. Combine yeast, water and 1/2 tsp sugar. Let it froth.
2. Mix both flours, coconut milk powder, D.A.B.P, sugar and salt together. Make a well in the center. Pour in frothed yeast mixture and 3/4 of the pandan juice.
3. Mix until a dough is formed. Add more pandan juice if dough is too dry, but do so by the tablespoons.
4. Knead until a smooth dough is formed, add in melted shortening and knead until it is well combined, as in, u don't feel anymore oiliness.
5. Leave to proof for almost an hour in a almost fully covered container (I like to put it in a covered pot, my pot cover has ventilation holes). Dough is ready when it is doubled.
6. Punch down and knead for another minute.
7. Divide dough into 40gm pcs. You can get about 24 pcs.
8. Shape dough and leave to proof for another 45 minutes or until shaped dough has doubled.
9. Steam on high heat for 12-15 minutes. 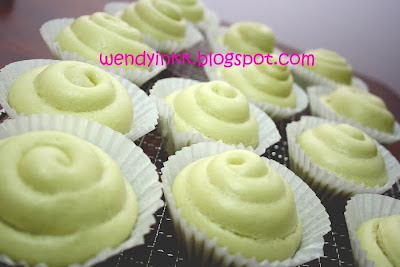 How to get concentrated Pandan Juice

Life is just bland w/o it.


Pandan or Screwpine is a common colouring and flavouring plant used in South East Asia (I'm not sure abt other parts of the world). It's one of the most common "herb" that u can find in our gardens or pots.

During the olden days, before the birth of blenders or liquidizers, these leaves are pounded with the mortar and pestle to obtain the precious green extract.
Now, what the heck for all the trouble and arm work???? Just use the blender!

But before that, u have to snip the leaves as thin as u can with scissors, no knifes, can't do the work like scissors do. Why snip it? Why can't I just break them up and throw them in. Yeah, u'll work ur blender blades til they drop. Pandan is very fibrous, the long fibres are no easy task to break up, even with a micro cutter blender that I have. Wash it before u snip it, no need to dry it. Discard the torny tip and white bases. The torny tip will itch ur hands when u squeeze the juices and the white base is slightly bitter. Use mature leaves(but not old leaves) , not shoots as the shoots can be slightly bitter and contain less pigment. But do not discard the shoots, u can still use them to boil sweet soups, it doesn't taste bitter this way. 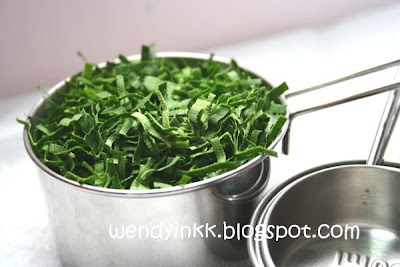 In the pic I used 1 cup of snipped pandan leaves, abt 25gms.
Then u put them into a blender with 1 cup of water, and whizz away. Put the cap on!!!!!

Pour blitzed pandan over a fine strainer, and SQUEEEEEEEZZZZZZEEE!! 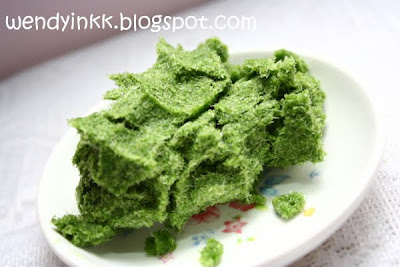 Do this until u can no longer obtain a beautiful green colour. 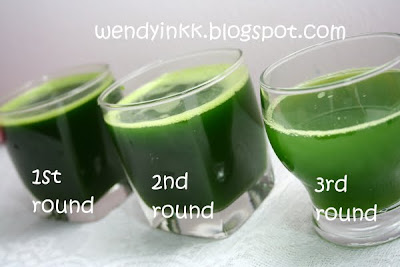 See the difference in colour??

1st round : Good for cakes and anything that needs really concentrated juice. If making chiffon cakes.. this is it!

2nd round: Good for seri muka, jelly or pau/mantou, where the pandan extract is mixed with other liquids for use. Ondeh-ondeh/buah melaka will be ok using this one too.

3rd round: Good for cendol, kuih talam where a lot of water can be used. 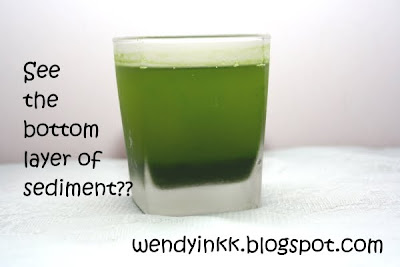 Pour away the upper layer of water, leaving behind moss like powder... U have it, concentrated pandan extract.

Well the glass of pandan juice in this pic was left in the fridge for almost 5 days... it took so long this time. usually by 3 days it'll sink. So better do this in advance so that u'll have really green pandan.
The upper layer need not be thrown away, as there is fragrance there, just mix it with other rounds of extracts to make stuff that require more dilute pandan juice.

Keeps well in the fridge for up to 2 weeks. Discard when it smells like rotten leaves.
Do not freeze it. I've tried it, the fragrance is lost and the chlorophyll gets separated from the water.

Updated: 17/12/09 : This time I got the concentrated layer in just 18 hours. I used the sunken part to make Oiless Pandan Chiffon and whatever balance for Pandan Mantous. 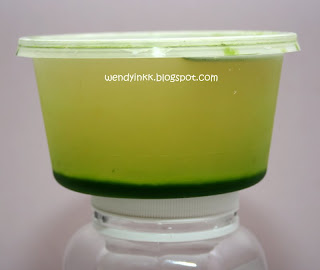 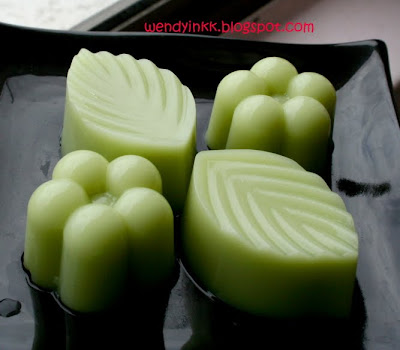 I like my jellies that contain coconut milk to be homogenous. I do not like them separated to 2 layers. If they are separated, I find the coconut layer to be harder,therefore I do not like that. BTW, this is a firm jelly. If u like it wobblier, just reduce the agar amount by abt 30-50%.


This will taste a bit “green”, but pandan juice(alone) cannot be boiled in advance for too long as the green colour will separate. Don't worry, the green smell will go off in 2 days time. It taste better aged. Can be kept for 2 weeks in the fridge.

If u’re using agar-agar strips, then u have to change the method. Boil water with agar strips. When mixture has come to a boil, put in pandan juice, and continue to boil until agar strips have all melted away. Put in sugar and (c) and bring back to a simmer. Cooking with agar strips takes longer time, therefore the sugar goes in later.
Posted by WendyinKK at 9:49 PM 10 comments: 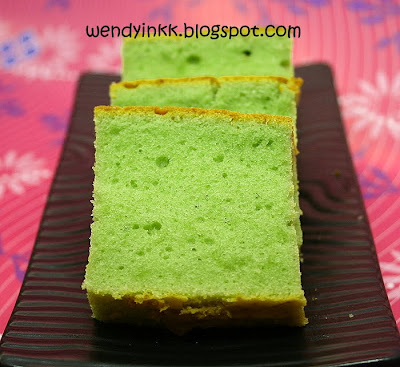 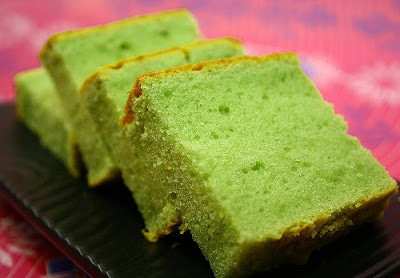 No, this cake is not made with any artificial colouring. The greeness came from pandan juice. I made this cake based on Aunty Yochana's recipe. I didn't put in kaya, so I didn't name this cake as she did.
This cake is nice to eat, best with a cup of tea... teh-o to be exact :)

Method:
(1) Sift flour and baking powder. Set aside.
(2) Cream butter and sugar till creamy.
(3) Add in egg one at a time and make sure it's properly mixed before adding in another egg. Pour in coconut milk, pandan juice and salt and mix.
(4) Fold in sifted cake flour and then pour into a 7" sq. tray and bake at 175C(preheated) for about 60 mins.


I will post on how to make really concentrated pandan juice, and more pandan flavoured recipes coming up.

*update: 2/6/2016: Please take note that this cake is rather tricky. It's better to overbake it. Back in those days, I baked this cake in a Microwave convection oven and I actually recommend baking this cake at 180C for 1 hour 15 minutes in a regular oven. And always check the doneness with a toothpick right in the center, all the way down before stopping the baking process. An 8 inch cake pan will be a better choice. Aunty Yochana noted it as 7 inch, so I just followed suit, but personally I think an 8 inch square pan or 9 inch round is better.

** update 22/5/2017:
Please visit Aunty Yochana's website if you doubt this recipe to see the success of other bakers rather than complaining about this recipe.
If you will prefer a more foolproof recipe, my personal suggestions is that you use 100ml concentrated pandan juice and 25gm of coconut milk powder rather than coconut milk. Change the cake flour to plain flour + another tsp of baking powder. Use an 8 inch square or a 9 inch round pan.
This cake was baked back in 2009, when I started blogging not long. I just copied her recipe almost word for word. It worked well for me, and for some others, like I said in above that I needed to bake it much longer than what Aunty Yochana said. I didn't create this recipe, but if it didn't work well for you, I'll try to help you troubleshoot.
If many others can get it right, and you can't, think about it.

Email ThisBlogThis!Share to TwitterShare to FacebookShare to Pinterest
Labels: Cakes, cakes-butteroil, Coconut, From the net, Pandan 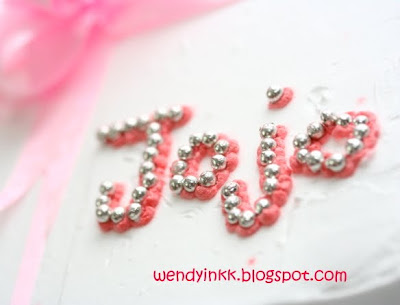 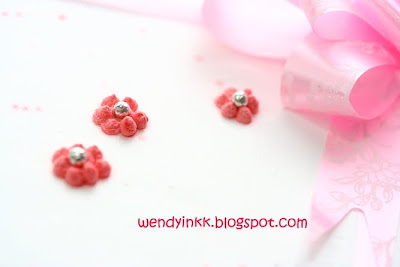 Joanna is the youngest daughter of my eldest brother. We call her Jojo mostly.
She requested for a present cake, and I couldn't decide on the cake inside until last minute. I finally made a strawberry chiffon with strawberry ripple cheesecake filling. The party was last Saturday.

After this cake, I'll get myself forceps to use with those dragees. This cake had fingernail dents especially near "Jojo". I almost wanted to stop putting those pretty silver pearls after the capital J, but, in the end, I ended up decorating the whole name.

To apply fresh cream over a square cake is......... UUURRRGHHH!!
It's so difficult to get a nice edge. I can't chill the cake and level the sides, ulike buttercream which will harden when chilled. Fresh cream remains as it is when chilled, soft and with a high capacity to be damaged with the slightest of pressure, of which I did while putting on those dragees, my palm hit the corner and.... ta-da, the cake is chipped.
With it being a present cake, I can't put stuff by the side like almonds or chocolate shavings to do cover ups, So, I tried my very best to repair the damage.

I don't think I'll attempt another square present cake, unless it's with buttercream or cheese frosting. :) 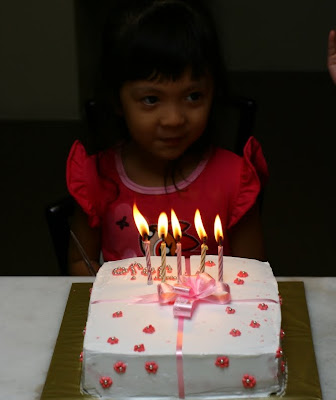 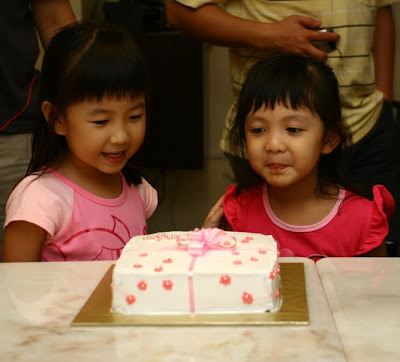 Joanna with her elder sister, Hannah 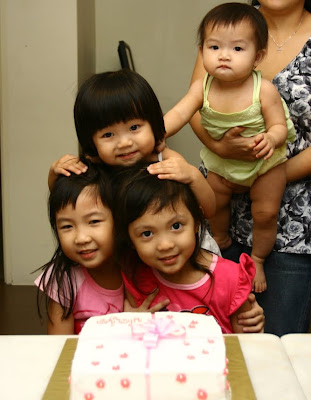 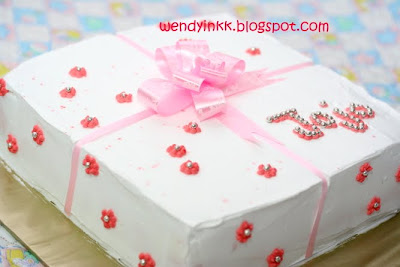