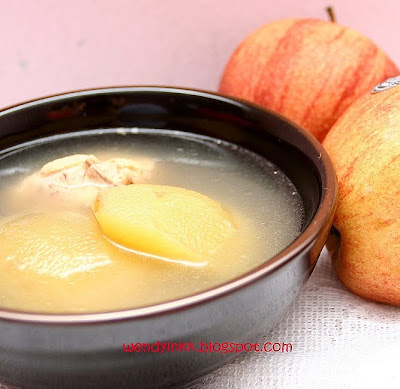 Aunty Veronica Ting was the pastor of my church during my early teens. We lived near each other and she is a dear family friend. During the last few months of her attachment here, she was down with Athritis, and she'd request that I prepare certain foods for her, nothing malu-malu(to be shy of), cos she treats us like real close friends. Now she's posted back to where she came from, KL Wesley, looking better and healthier than ever before. God bless u, Aunty Veron.

Before she had that joint pain, she often dines at our place, uninvited (there's no need to invite once it's like family) and once she brought us this wonderful soup, never eaten before….. It’s apple soup. Huh? Apples can be made into soup? Yup… she did, and she taught me how to do it. I doubled up her recipe here.

Bring the water to a boil and put in chicken breast and apples. Simmer on low heat for 2 to 2.5 hours. Season with salt. 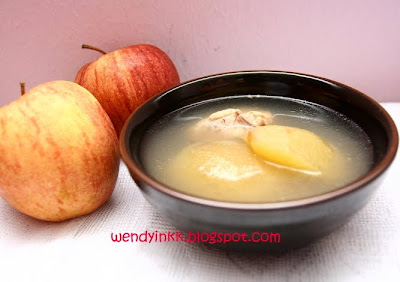 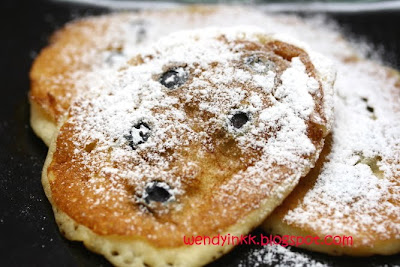 First of all, my apologies for posting this really really late, when blueberries are almost off season. I've forgotten abt this post! Been too engrossed with virtual restaurant in FB!

Fresh blueberries are a novelty here. The first time I saw them, they were selling for RM20 something per pack (abt 1 cup amount). And this year, I saw them in Jusco going got RM8.90 per pack.

This is cheap!!! … comparatively.

I bought 1pack, and didn’t now what to do with it. It’s so precious..
Should I eat them raw(they’re sweet), or use them in my bakes? Cheesecake? Muffin? Or… Pancakes…..
We ate some raw, used some for a cheesecake, and the balance for these pancakes.

I adapted this recipe from smittenkitchen.com. The site says do not mix the berries into the batter to prevent them from bursting, but to drop them onto the batter in pan. Ah-Ha!! A great tip!
I didn’t make it according to her recipe, as the morning I made these, a major internet server was down.. and my area was affected. I tried to make it from what I could remember reading from her site. And this is what I did.
This recipe made 17 pieces (1 Tbsp per piece, hey ! They will expand when cooked). Quite a number for 2-3 persons. Very yummy, fluffy and nothing like the first pancake I’ve tasted at Small Kucheh’s (youngest aunt) house (if u’re reading this, I know u’ll kill me. Hahahah!)
Throw away those pancake mixes… this is easy and yummy. Make it from scratch. You won’t regret it.

1. Combine dry ingredients and stir to mix. Make a well in the center.
2. Combine wet ingredients and give it a light whisk.
3. Pour wet ingredients into the dry ingredients well. Stir until no lumps are seen.
4. Heat non stick pan over low heat (not the small fire in the center of the burner, but try to adjust the fire to be small all around)
5. Lightly brush pan with a little bit of butter (I just smear it with my butter wrapper)
6. Spoon 1 Tbsp(I used chinese soup spoon) of batter (it’ll expand) into pan. Place a few blueberries onto batter. Don’t do to many pancakes in the pan at one go, u need space to flip it.
7. When bubbles appear all over the surface, this is the time to flip it.
8. Continue to fry pancakes until batter is used up.
9. Sift icing sugar over cooled pancakes. Or u may drizzle honey upon serving. 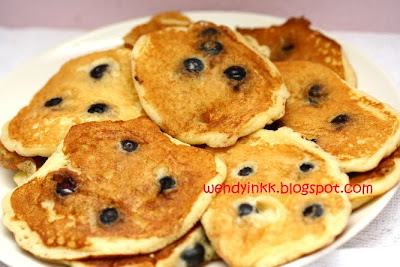 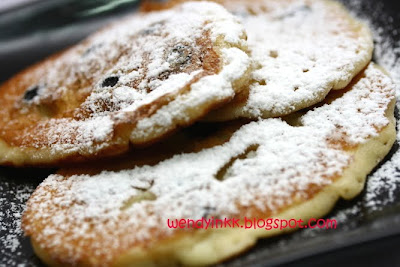 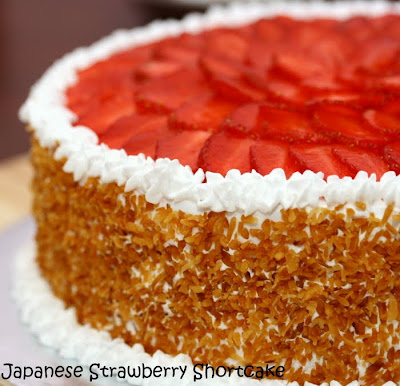 I made this again... as pretty as I can. I made this many times, with different deco, mostly.
But this one I used back the same design as my old post.
I used to make this using Aunty Yochana's recipe..but the sponge doesn't work out great. I find that it contains way too much flour.
I used the sponge recipe that I formulated with Strawberry Yogurt Cake.

The outer frosting is non dairy topping cream, while the filling inside is made with dairy whipping cream. I find that Anchor brand whipping cream whips faster, but less volume, Emborg had better volume, but needs longer whipping time, plus Emborg is whiter. Emborg has a lighter taste, and Anchor is creamier. Anchor is cheaper, much cheaper than Emborg. I don't use other brands much, as I only buy Emborg in 200ml packs, and when I need alot, I use Anchor 1L packs. The 200ml pack costs 45% of Anchor's 1L, so, I try to use Anchor, whenever I can, and use up the balance for pasta or ice cream.

This cake is very nice..... fresh strawberries, more than 1/2kg are laid in the layers and on the top. Toasted coconut lends a fragrant touch to the cream... 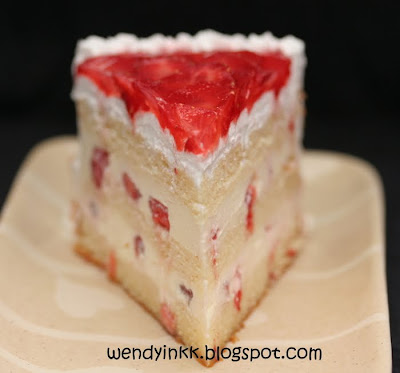 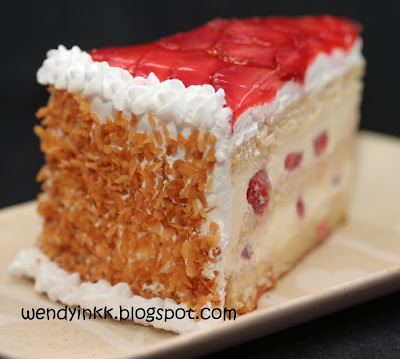 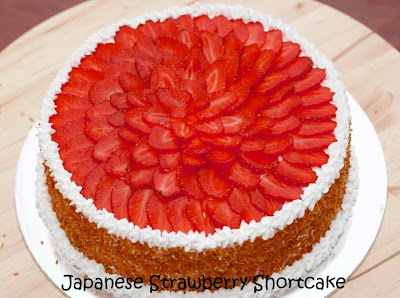 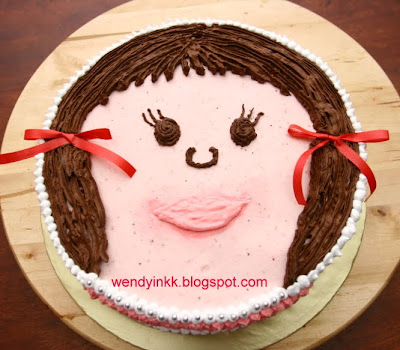 Lucille Cha, born about 2 weeks later than Lydia had her party last Saturday. I made her this face cake.

The inspiration came after seeing another fellow blogger, "Pure Enjoyment" 's profile pic.
This cake is another strawberry yogurt cake... been making a few lately, well, strawberries are most kids fav, and yogurt is too. Made one for Lydia's birthday party's dessert, and another one for my nephew, Andrew. Lucille's mom said Lucille likes strawberries and chocolate, and she likes to encourage her to eat yogurt, so out came this cake, Strawberry Yogurt Cake, with chocolate sponge.

I would say making this cake is a challenge.... the challenge of placing the features correctly.. and of which I think I've failed. Ya ya,... the nose is below the eyes and above the mouth.. that's correct..but the eyes are too near each other, nose to high up and the lips.... OMG, have u seen jumbo sausages? Those pink sausages are right below the nose.. UGLY!!

I tried piping the lips so many times, luckily the surface is a gelatine surface, not a cream surface, if not I wouldn't have been able to redo it over and over, and over and over again.... See the stain near the lips.. it looks as if she's been crazily kissed by a maniac and got lipstick smudged all over. UUUURRRRGGGHH!!! 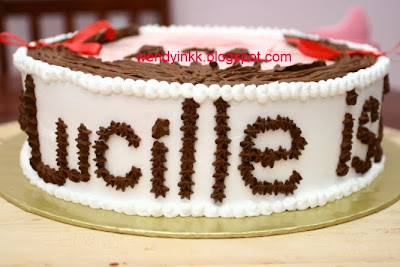 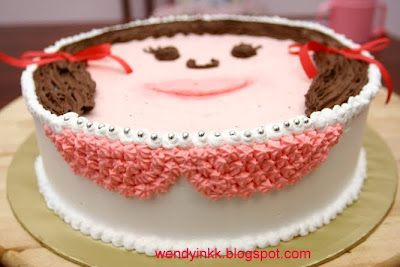 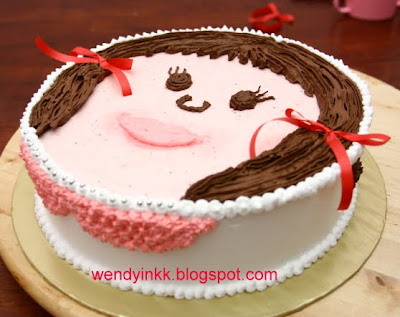 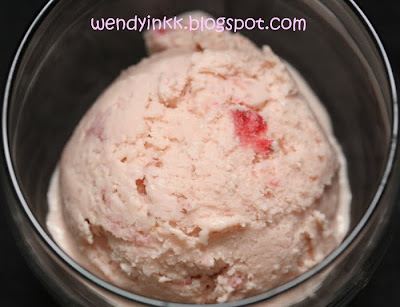 Making ice cream w/o a maker is a bit tedious, whizzing and waiting…. I might try the salt and ice method next time.

The outcome of this ice cream is yummy…. Almost Haagan Daz like(taste, the flavour, not the texture), just that not as smooth, with some ice crystals. Well, I whizzed it twice, and it was way too late, had to sleep, so I didn’t bother and freezed it til morning. Haha, but yet, it was good.

1. Chop strawberries and macerate with 100gm sugar until soft.
2. Whip egg yolks with 250gm sugar until pale and fluffy. Combine with macerated strawberries.
3. Bring milk to a boil, slowly pour into egg yolks, whisking all the while.
4. Pour egg yolks mixture back into saucepan and cook on low heat until mixture thickens slightly coats the back of the spoon, do not boil.
5. Remove from heat and leave to cool down totally. This step can be done hours ahead, and best to be chilled in the fridge.
6. Whip whipping cream to soft peaks and fold in (5). Put mixture into freezer.
7. After 2 hours, bring it out to give it a good whiz with a hand held mixer. Repeat this step an hour later, and another hour later. After that every 30 minutes until ice cream almost solidifies. Pack them into freezable containers.


The picture for step 4, dip spoon into custard and draw with finger on the back of the spoon, If the line stays, it's ready. 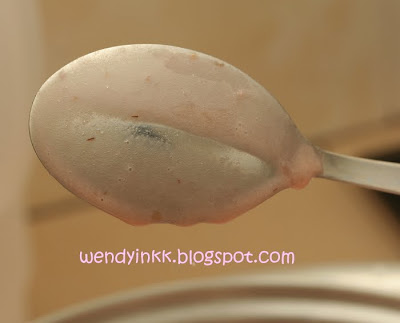 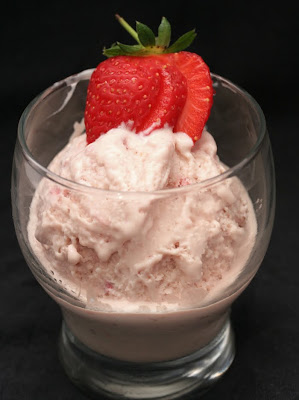 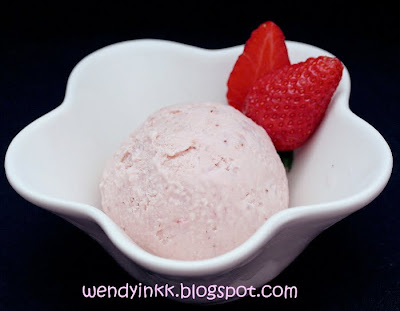 I don't have an ice cream scoop at the time of the pic..
All the ice creams were shaped with a ladle :)
I tried to take a pic everytime I eat it, but yet... it's the unadorned one(1st pic above) that looks the best 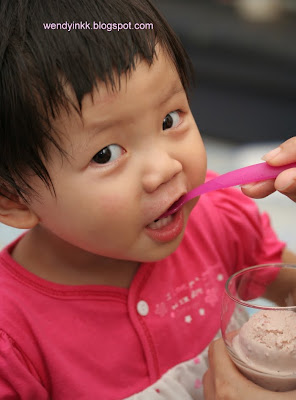 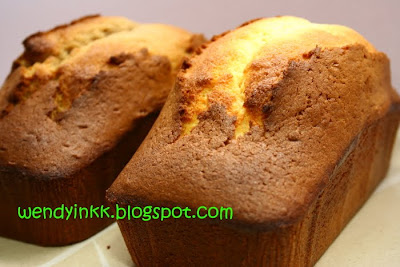 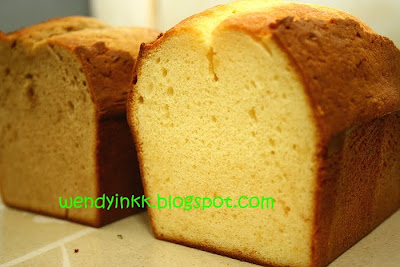 This is something Malaysians haven't tasted for many many many years.... more than 10 years. FYI, what is sold in Malaysia is Sweetened Creamer, or Sweetened Condensed Filled Milk (It's not real milk, it's mixed with palm oil. Even this has dissappeared from the market shelves these few years)
Many Malaysians do not realise this, as when I chatted with them on this matter they went "Huh?? Is it? They've changed?" I even emailed Nestle on this matter many years back, and they did respond to me saying that it is no longer sold in Malaysia for many years, but it is available in Singapore.

My dear Malaysians, Read the labels!!!

When I was small, I loved Nescafe with condensed milk.. the flavour really comes out good...... but as I grew up, I wonder where did the fragrance go???
I didn't realise the difference was due to the milk. It was condensed milk alright, but what I had long long long ago was full cream condensed milk, the old famous Milkmaid brand. But now....even Milkmaid now has changed to a sweetened creamer. I had to add a tablespoon of FULL CREAM milk powder in addition to the "condensed milk" to my Nescafe to make it smell like it was 25 years back!

I made this cake with condensed milk brought back from Singapore by Lydia's Nanny. And yes! It is Sweetened Condensed FULL CREAM milk. The real thing!

If u really can't get hold of sweetened condensed full cream milk, the best substitute in Malaysia is Vitaminized by F&N. It is a creamer, read the small print by the side, but, with milk solids added. Therefore, having a milkier taste than other sweetened creamers. See.. they don't even put on the front label as Sweetened Creamer!!!! What's the problem???? What is F&N trying to hide from us???? Malaysians can't afford better food???? I know.. it's only RM2.60 for a 505gm can... cheap cheap cheap. Pay Peanuts, Get Monkey.

Try this cake, it's good. Fine crumbed and soft, with a nice crust.
I made 2 portions. One in original vanilla, the other with coffee. Coffee with milk is YUM YUM!!!!

1. Sift cake flour and baking powder tog. Set aside.
2. Cream butter and sugar tog till light and fluffy about 2 mins
3. Add in salt and vanilla paste and cream well.
4. Pour in condensed milk and cream till well combined.
5. Using the mixer on low speed, add in flour in 3 additions. Mix till batter is smooth.
6. Add in eggs one at a time. Make sure it's well mixed and smooth.
7. Bake at 175 degrees for 1 hour. (I baked at 160C for 40 mins)

To make it coffee flavoured,
Dissolve 1 Tbsp instant coffee with 1 Tbsp hot water, and mix it in the batter after step 6. 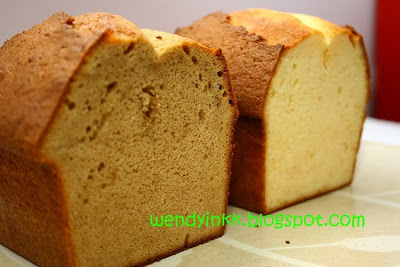 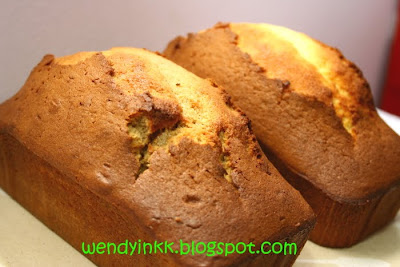 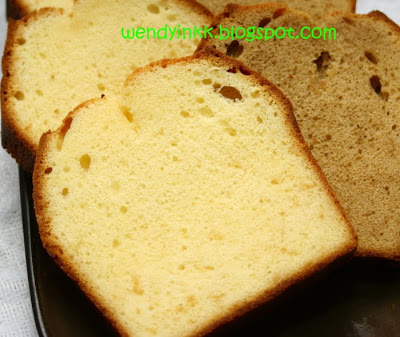