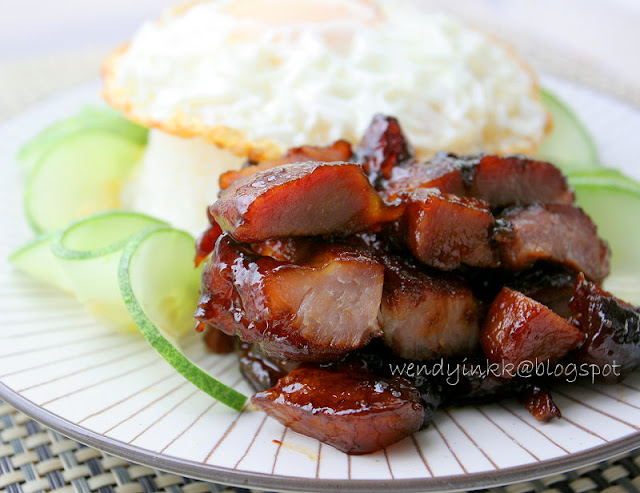 If you don’t have any idea about this, it’s like taste like KingDo ribs, except that it uses pork shoulder, done in Filipino style. It’s a breakfast dish with rice and eggs, but err.. I served this for dinner.

I was a bit scared by the amount of salt and sugar it called for. Call me a wimp, but maybe 2 cups of sugar will not scare you off, but it did scare me

I did some changes to the recipe, besides lowering the salt and sugar. I used Coke instead of lime flavoured carbonated drink which can be either 7-up or Sprite. Cos I read in other sites, anisado wine, which is a star anise flavoured wine should be used in the marinade. Coke has some spice notes in it, so, I used this instead of 7-up or Sprite. And both coke and pineapple juice has tenderizing functions, and this pork is not tough but tender, but not too tender that it falls apart. I’m not sure what will happen if you use fresh pineapple juice, but I just followed Anne to use Lee brand pineapple juice, but in reduced amount. I drank the rest, yummy yummy.

1. Marinate everything together 48 hours in the fridge. (Use stainless steel/glass or ceramic container.)
2. Put a little oil in a heavy based pot and put in pork slices. Brown both sides and pour in 1 cup of the marinade. Cook on medium heat until the gravy dries up

Actually I overcooked the pork. I was being not contented with the way the gravy coated the pork, so I slightly cooked it further, hoping that it would coat the pork nicely, but in the end,  it looked like char siew. Taste wise, it'got a slightly charred flavour and it's just not right. Very different from what I took samples of earlier (before it looked like char siew). Maybe I didn't stir the marinade, and the sugar settled down (in the marinade container) when I poured the gravy into the pot. Which was why it didn't thicken and coat the pork. 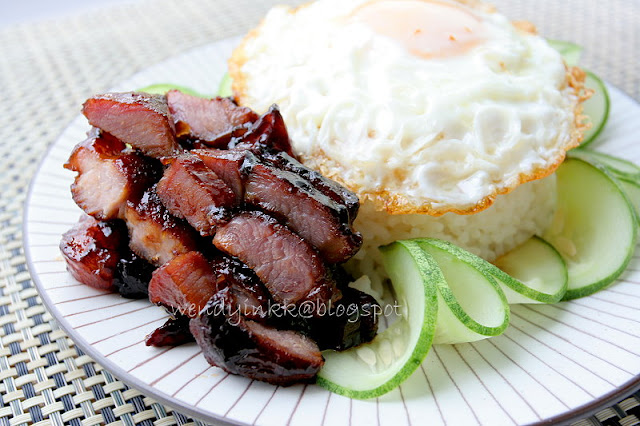 And since there was loads of marinade left over, I didn't want to waste it and  put in 3 pieces of boneless chicken whole legs and let it marinate for another 24 hours. Cooked it the same way and it was so delicious. 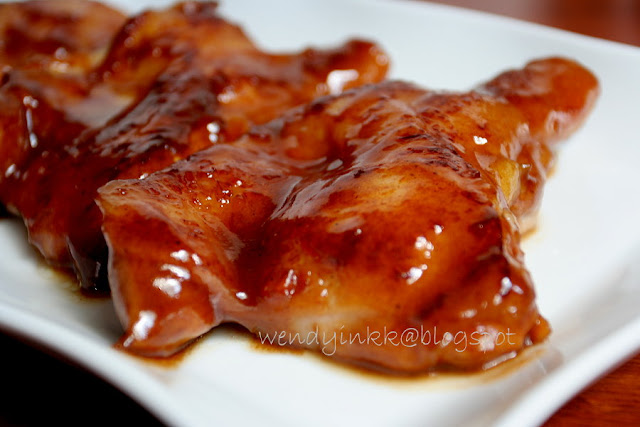 And this time, the chicken turned out exactly the way it's supposed to be, prettily coated with the reduced marinade. (so, if you want to try this, make yours to look like this chicken, not the pork above)
The reduced sauce was at the consistency of ketchup, and I separated the chicken and "ketchup", so that the gravy can be used as a dipping, should anyone prefered extra gravy. Indeed, all slurped up.
After Mike ate this, he said, should we start a home restaurant???
What he meant by home restaurant was allowing private dinners of others over at our house,
like a small scale restaurant.
My response: Huh???
He's into one of those dreams again.
Always asking me to do this or do that to make money.
If you think this is his first idea, no it is not.
He has asked me whether can sell my rice dumplings and Cha Siew Pau over the internet and courier them.
Hahaha!!! I just laughed at the idea. 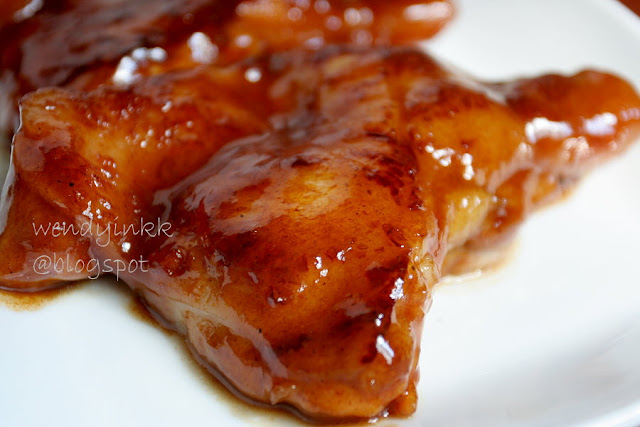 Email ThisBlogThis!Share to TwitterShare to FacebookShare to Pinterest
Labels: Chicken, From the net, Fruits-Tropical, Pork, pork-braisedstirfry