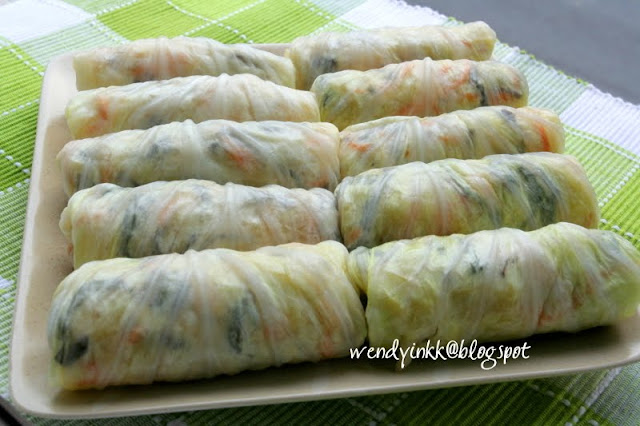 When I was still a fresh graduate, I stayed with my chummies in a rented apartment. We always cook and have meals together. And they complained about their waistline when I stayed with them. Hahaha!!! Everybody who stays with me does!!

One late afternoon, I just went about shopping at the nearest hypermarket, Giant. Suddenly I felt like making cabbage rolls. So I just bought a small jicama, a small carrot and a bit of this and that. When I got home, I felt like in putting in this and that.. and lucky Wai Wai came home. She said, woah, what are you doing.. and hehehe, we had the best meal in the house (everybody else was out) Just these rolls, and the both of us were so full. 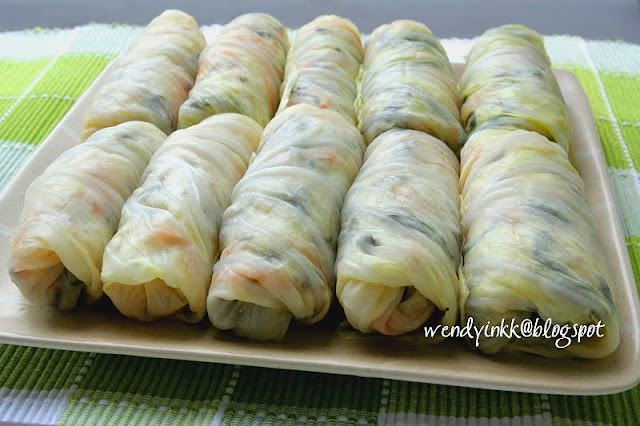 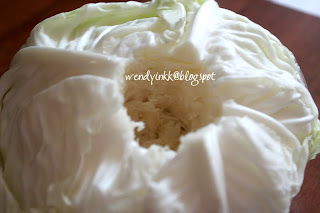 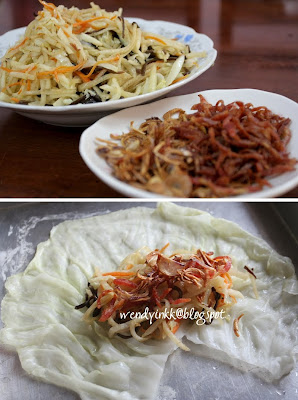 1. Cut and dig stem from cabbage. Place in a pot of water, stem side down, and boil for 10 minutes or until soft and pliable. (the cabbage should still yield some crunch, but pliable)
2. Remove cabbage from pot and let it cool. Peel cabbage, leaf by leaf, taking care not to break them. If it’s not soft enough, return to pot and boil again. When the leaves seem too small for wrapping purposes, slice them finely and squeeze them dry.
3. While waiting for the cabbage to cook and cool down, cut jicama, carrot, wood ear fungus, Chinese sausage into matchstick sizes.
4. Slice shallots.
5. Heat a wok and put in 3 Tbsp cooking oil.
6. On medium heat, fry shallots until golden and crispy. Drain and dish up.
7. With oil still on wok, on medium low heat fry Chinese sausage until golden. Drain and dish up.
8. Turn heat to high and fry jicama, carrots and wood ear fungus until wilted and rather dry. Put in shredded cabbage and toss until dry again, just make sure there is no visible juice at bottom of wok. Season with salt and pepper.
9. Dish up and leave to cool.
10. To wrap: Place one piece of cabbage, curve side up, snip away the hard end with scissors. Place some of the veggie fiiling onto cabbage. Top with some fried sausages and fried shallots.
11. Fold both sides in and roll cabbage tightly.
12. Repeat until either all fillings or cabbage is used up.

And I have nothing in excess this time, all nicely used up
Mike needs chili sauce to go with this, but I just eat them as they are, I love these, so did Wai Wai, 9 years ago. 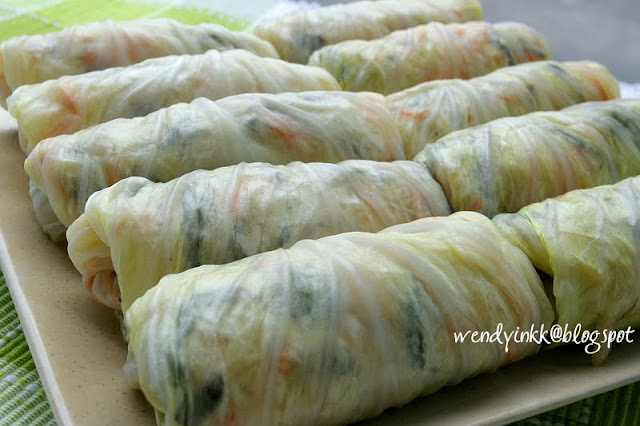