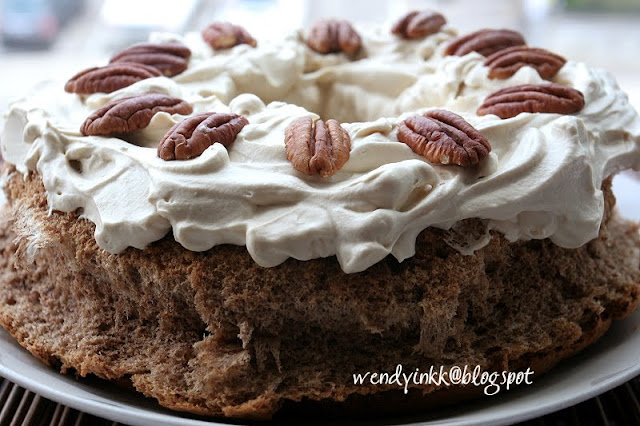 This is my second encounter with pecans.(Hummingbird Cake jumped queue)

I used to wonder what’s with the hoohah of pecans over at US. They love pecans more than so many other nuts (well, it’s featured in a lot of American recipes), well, may be due to it’s origin, Pecan is American. But now I know why. It’s just our bakery suppliers sell us inferior ones that don’t really taste and smell good, than I expected them to be. Or maybe it’s only the one that I frequent whenever I’m in KL.

My mother in law got me some Texan Pecans and boy, they smell so good when lightly roasted. Taste so good too. To me, it definitely wins over almonds, pistachios, hazelnuts, walnuts and cashews.
And now she has left us on a plane back to Houston to get me more pecans, here’s a Pecan Torte with Coffee Cream. 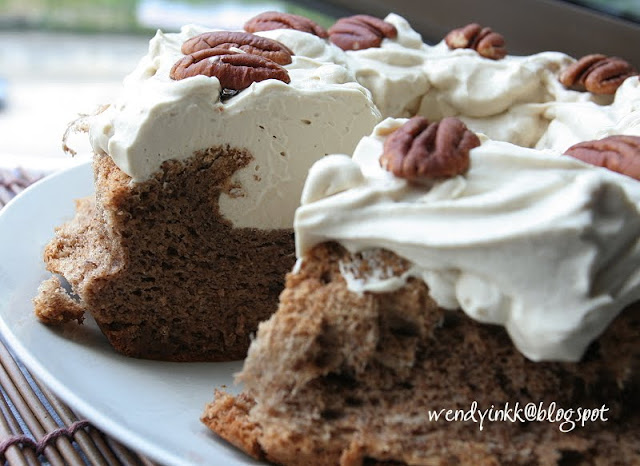 Pecan Torte Recipe (from Rose's Heavenly Cakes)
(A)
225gm pecans (I roasted 250gm, and took out 12 pieces for decoration)
50gm sugar
3 tsp Nescafe Classic (I prefer classic over gold when it comes to cakes)

1. Preheat oven to 175C (I did 160) and bake the pecans for 7 minutes. Leave to cool and blitz with sugar and Nescafe classic until fine crumbs but not pasty.
2. Beat egg yolks with sugar until pale and fluffy (about 5 minutes on high), then, with a balloon whisk, fold in (A).
3. Wash beaters and in a separate bowl, beat egg whites until frothy. Put in cream of tartar and beat until soft peaks. Put in sugar and beat until stiff.
4. Put ¼ of the beaten egg whites into the egg yolk mixture and fold. Repeat with another ¼ of the egg whites.
5. Pour the batter into the balance of egg whites and fold.
6. Pour batter into a ungreased tube pan(25cm) or a 9 inch ungreased round pan (must be 3 inch height, if not will overflow when baked, line with baking paper).
7. Bake for 30-40 minutes.
8. Let cake cool for 5-10 minutes and release cake from pan or you may want to try invert immediately upon removal from oven, and let it fall like mine. 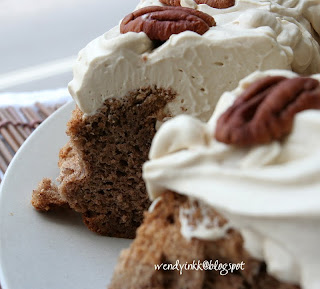 1. Melt Nescafe with hot water.
2. Put gelatin in a heat proof bowl and gently pour water onto it. Lightly stir with a toothpick.
3. Pour melted necsafe into gelatin mixture.
4. Double boil or zap in microwave for few seconds until gelatin dissolves. Set aside to cool down totally. Mix in vanilla extract.
5. Freeze mixing bowl and beater for 5 minutes.
6. Pour cold whipping cream into mixing bowl and beat until traces of the beater marks begin to show distinctly. Put in sugar and beat for 10 seconds. Add the gelatin mixture in a steady stream, whipping constantly until stiff peaks form.
7. Spread cream onto cake

My cake fell from the tube while cooling inverted. Darn!!!! I think since this is supposed to be a spongy dense cake, I could just remove it from the pan immediately upon removal from oven. Just like some sponge cakes that should be treated that way, so that they may cool down to a nice equally flat cake rather than with a depression. Actually it's just me being itchy to invert it. I should've just release it from the pan immediately after removal from oven.

This cake is very nice to eat, even though it has fallen…. Just like what it should be, moist, dense
Posted by WendyinKK at 10:14 AM