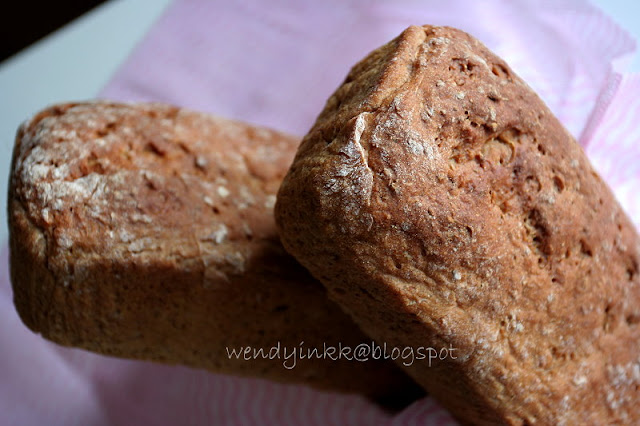 I knew of pumpernickel through Barney. This purple dinosaur not only taught my girls stuff, but it taught me that there is a bread called pumpernickel. So off I went googling for more information.
Pumpernickel is a German traditional bread that is traditionally leavened for days and slowly baked at low temperature. It’s very dense and full of rye.
But Americans made their own version of pumpernickel, adding in coffee, molasses, cocoa powder to imitate the dark colour that traditional pumpernickels have. And it doesn’t possess the density that traditional ones have, rather more like regular wholemeal bread. Personally I believe that I’ll try out the adulterated version.. due to convenience. But please take notice that this is not the real pumpernickel that is German in origin. 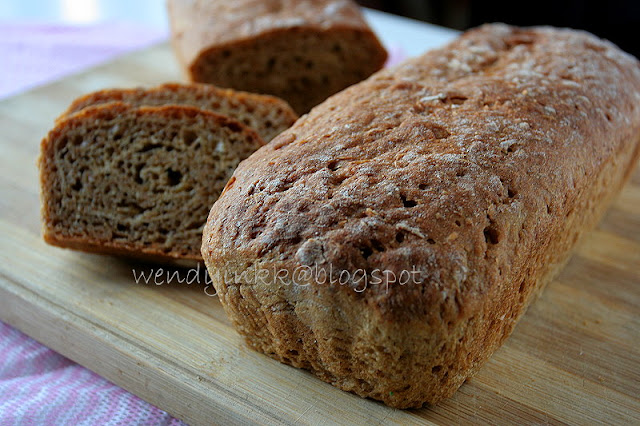 One day, when I went to Ipoh for some bakery supply shopping, I saw the word “pumpernickel” in the fridge. I looked closer, gosh!!!! It’s pumpernickel rye flour or the coarse meal of rye berries. Then I saw dark rye flour beside it. Gosh!!! These stuff are in Ipoh?? Gosh Gosh!!! 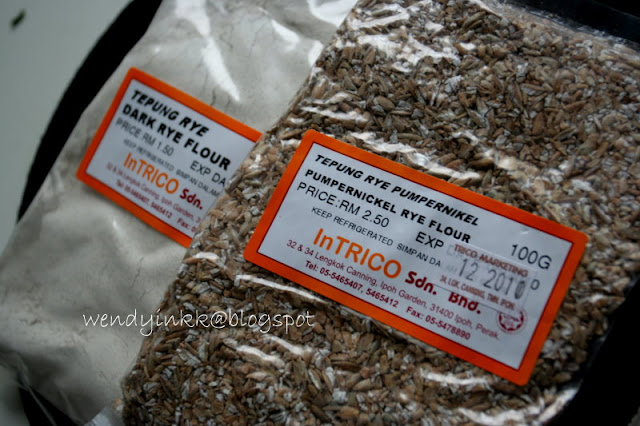 I quickly bought one pack of each and when I got home, I tried to find a suitable recipe.. and I found this . I do not have whole meal flour with me, but pumpernickel meal, so I subbed the whole meal with pumpernickel meal, isn’t that better? I only have that much of rye flour and pumpernickel meal, so I can only use bread flour for the rest. And as always I love butter with bread and I put in slightly more. I adjusted the recipe slightly (sugar and oil) and the rest quite stuck to the ratio. I do not have molasses, but I have dark brown sugar, something easily found and bought at sundry shops, and they are really cheap. But mine was bought from Tesco, a milled form, lighter in colour, rather than in clumps. I do believe those in sundry/grocery shops that sells by weight smells better and looks much darker, just like gula melaka. Use that if you can. See the sugar in this pic to see how dark it is. The one below is the one I bought as used this time. 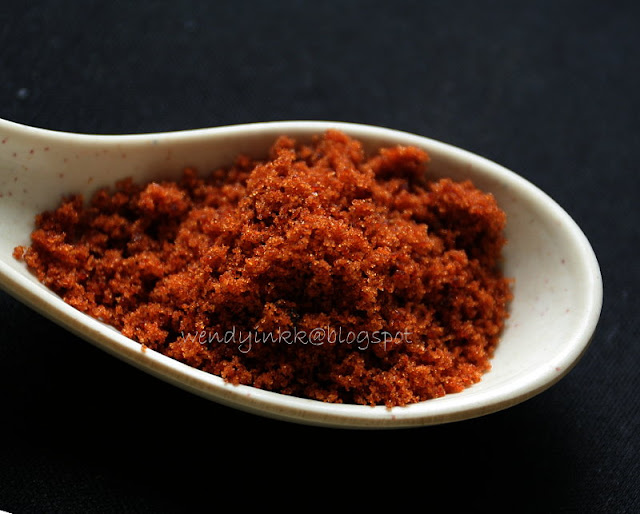 Non Traditional Pumpernickel Bread Recipe
100gm dark rye flour (although my package was labeled as dark rye flour, it doesn’t look dark at all, when I compared mine to the recipe source) 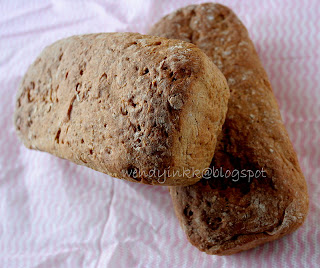 100gm pumpernickel meal (coarse rye), lightly pulsed to reduce to a finer texture
200gm bread flour
3 Tbsp dark brown sugar
20gm butter
1 tsp salt
1 ¼ tsp instant yeast
300ml water
Extra bread flour for flouring during kneading
Mix the flours and salt in a bowl. Stir in the yeast and brown sugar (break up the brown sugar a bit with your fingers before mixing it in). Make a well in the center of the bowl and add the butter, and water. Mix well to form a soft dough.
Turn dough out onto a floured counter and knead for 10 minutes. As you knead it, the dough will become sticky and a little difficult to work with – just add a dusting of flour whenever it gets too difficult and continue to knead. Clean out the bowl you were using and spray lightly with non-stick spray. Shape dough into a round and place in bowl, cover with a dishtowel and let rise in a warm place for 1-2 hours until doubled in size.
Punch down dough in bowl and place on counter to divide in two small oblongs. Grease two small loaf pans and press an oblong of dough into each. Cover and let rise for about 30 minutes. Preheat the oven to 400 F.
Place risen loaves in the oven and bake for about 30 minutes or until the bread is dark brown and sounds hollow when tapped on the bottom. Turn out and cool on wire rack. Wrap in waxed paper and foil (I just put into Tupperware, whole, unsliced) and let cure for 24 hours (I only did it overnight). Serve in thin slices. 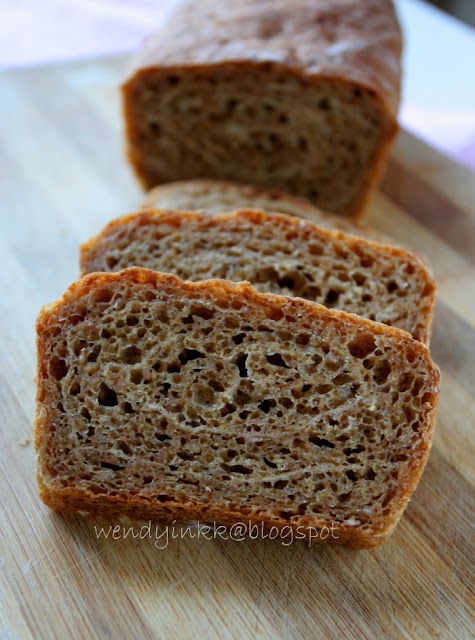 Actually I didn’t knead this by hand, but used Mike’s aunt’s breadmaker on Pizza mode. I'm a total flop with manual kneading.
Shaped by hand and baked in my oven.

The dough is very soft and STICKY. (Maybe it was due to using less flour comparatively cos I wasn't flouring the table for manual kneading) I was glad I did it in the breadmaker. I dusted and dusted my hands and tray with lots of flour when I wanted to shape it, which explains the whitish spiral shape on the bread slices. The dough is a fast riser….. it grows and grows. And when it was baking in the oven…. You should be here to smell it. Fantastic. My kids enjoyed this bread very much, compared to regular wholemeal bread. The pumpernickel meal gives it a nice chewy and "toing toing" texture. I'll definately bake this again...

I’m going to eat it with my homemade Apricot Jam… Yum yum. 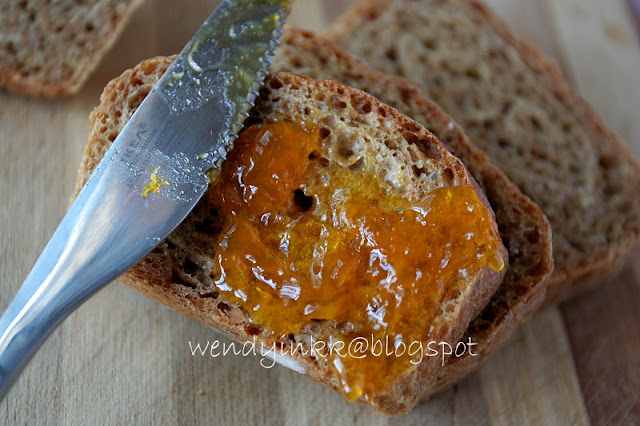 Email ThisBlogThis!Share to TwitterShare to FacebookShare to Pinterest
Labels: Bread n buns, bread-sandwichloaf, From the net