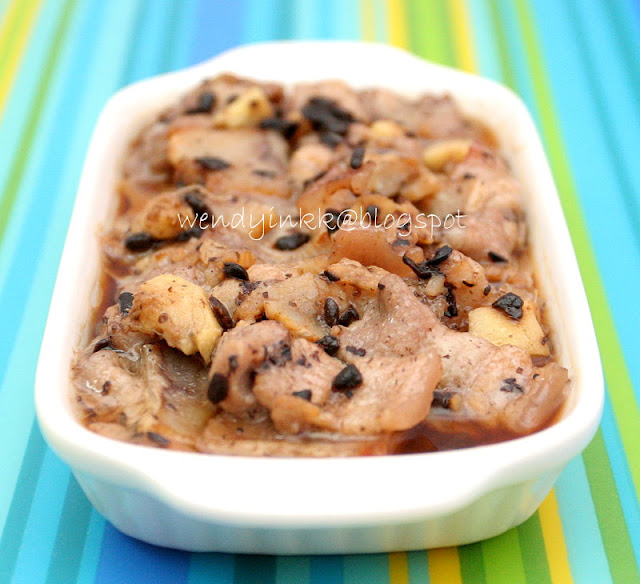 A dish that everybody in my family reminisces about Grandaunt.

Grandaunt is my paternal grandma's eldest sister.
She's the eldest in her family and I love to hear her stories from Panyu, China.
From how she gave birth to her 3 daughters on her own (yes, with no help at all, house door opened, with scissors and pot of boiling water by her bed), to how she catches "Woh Choong" , a type of water slug to cook. And how she will make dried shrimp in a large clay vase for the whole year's comsumption.

Grandaunt smokes, not Dunhill or Rothmans or Malboro. But pure tobacco rolled in paper, and she says those packet ciggies are tasteless. Tell her to stop smoking and she'll ask you," Who are you to tell me to stop, my dad taught me how to smoke". And she'll tell us how it all started. ...... She was planting in the field and got so tired and sat down to rest. Then her dad handed her a ciggie and told her to smoke it, so that she'll have the energy to work. Hahah!!! And she lived til she was 94. Died due to a fall that broke her leg on that eventful day when half of Malaysia blacked out (1996??), and when her broken leg failed to heal, her health faltered in a year. Should we sue TNB for that horrible blackout? We actually hoped that she'll live til 100 and make her cetenary celebration darn big!!! But she went home to Heaven a bit too soon.

She's the one who brought my grandma to Malaysia and became the baby sitter of 2 generations, my dad's and ours, while my grandma goes out and earn money for the family. Being the one at home, rather than my grandma, obviously some in the family regards her closer than my grandma, something of which my 2nd bro and I errr... don't really like. Grandma is still grandma, and nothing can replace that. But not to say that I do not appreciate Grandaunt's efforts, I do, just that she's still my grandaunt, and not my grandma. I can't do that to my grandma (even when she's gone for more than 29 years). When she had Alzheimers (before she left us for good), everybody knew how jealous she was towards grandaunt, she was mumbling "All snatched from me, all snatched from me" all the time, just because her kids were closer to grandaunt instead of her.
Sigh, should I pity Grandaunt or Grandma? Well, I just hold both close to my hearts. One gave her time to earn money to feed the family, one stayed behind for the kids and became the family's financial controller.

Well you may ask, what about her own kids? She had 3 daughters, gave away 2 while she was still in China. She brought the only daughter she was left with to Malaysia who later married the son of her boss who is a relative of my grandpa. Her sister(my grandma) is maried to my grandpa and her daughter married our relative, so, it's double relation.When she stayed with us for good, her daughter's already married and has a family of her own. Her grandkids are doing very very well now, and the only grandson is a prominent paediatrician in Singapore and another granddaughter a prominent medical figure in Malaysia's breast cancer field. Unfortunately, we seem to be closer to grandaunt compared to those who call her grandma. Maybe because she spent 50 years of her life with us.

Actually I do not know much about Grandma, cos she left us when I was not more than 2 years old, and Grandaunt stayed with me until I was 18. Grandaunt cooks our daily meals. She has a lot of "famous dishes".
And she's damn good in making steamed dishes. If I were to do her steamed dishes, one dish per dinner, It might take me more than 2 months to copy all her steamed meat dishes. Her forte is in marinating. She's got a good feel to what she adds. And she tastes everything before she steams it. Yes, even the pork before steaming. She'll dip the finger in the marinated dish and put the finger onto her tongue, let it sit in the mouth for a while, spit the thing out and gargle with water.

Well, anyway, here's one of Grandaunt's most well loved dish. Not really tasted when raw.. Gosh, can't do that myself.. yucks!

I can't really copy her version.. Nobody could really does things the way she does.
The taste is abit off from hers, maybe I used too much salted fish or black beans... Sigh, but I do believe that one day I will be able to do it like her.

So, this is for my own reference... and I'll try to perfect this one day. 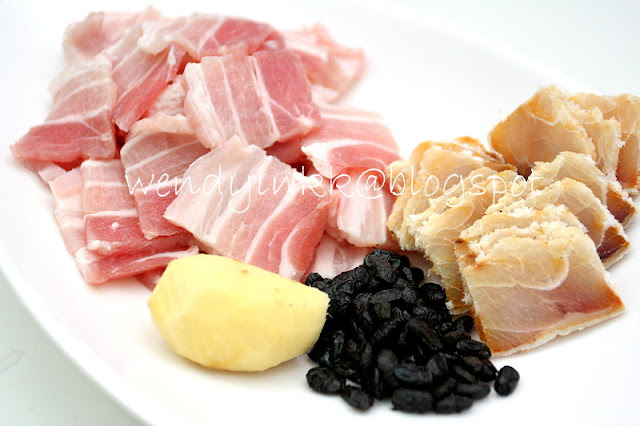 Combine everything and marinade for 30 minutes. Steam on high heat for 15 minutes.
This portion is enough for 3 pax. 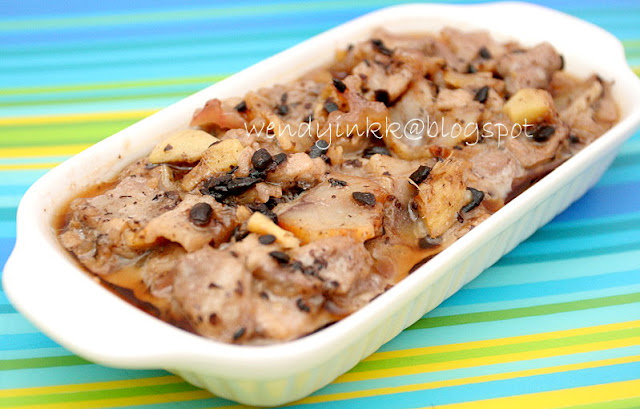 I'm submitting this to Babe_kl's Merdeka Open House
Do join in the fun in conjuction with Malaysia's 53rd Independance Day.
Posted by WendyinKK at 10:59 AM