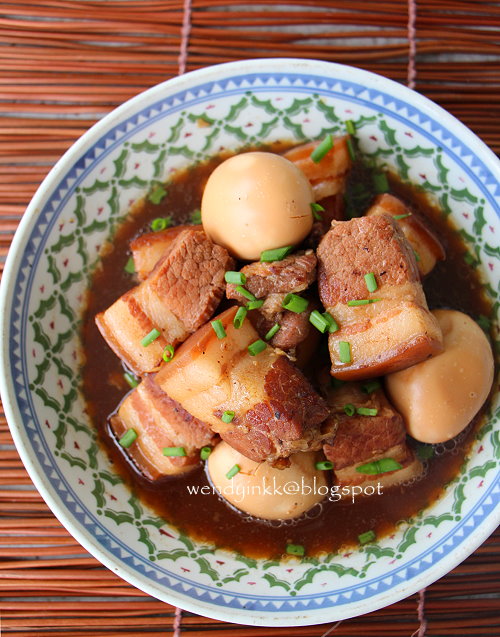 The second book I received from Tuttle Publishers.
I went through the book a a few times.. and I needed to convince myself that there is something good in there.

I've never been to Vietnam. My experience of eating Vietnamese food depends on the restaurants. The more variety it offers, then only, I get to try something new. 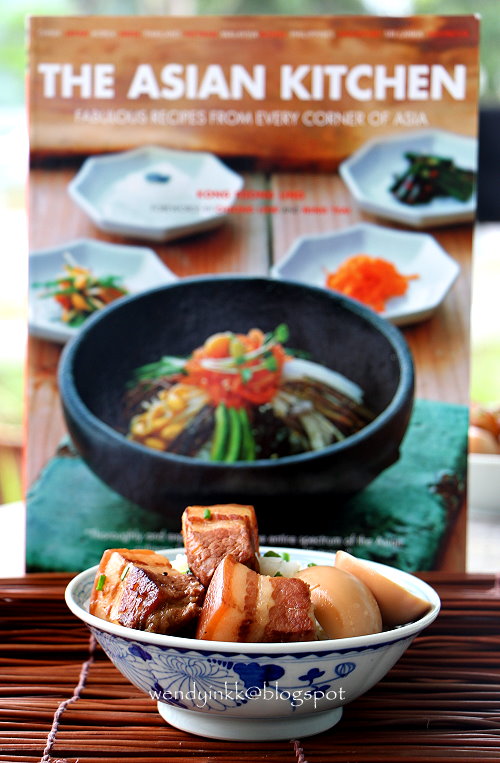 Few weeks back, on a trip to KL, my husband and I dined in a Vietnamese restaurant in Atria. He ordered Pork Stewed in Coconut Juice. The dish came boiling hot in a small pot, it was seriously bubbling away. The aroma and flavour totally appealed to me. But it was on the sweet side. One piece taste great to me, I don't think I will be able to finish that portion myself.

And at that moment, I remembered I have half a kg of pork belly at home, that I've almost forgotten about. I came home and checked the book... the recipe is in the book. So, let's test out this recipe. 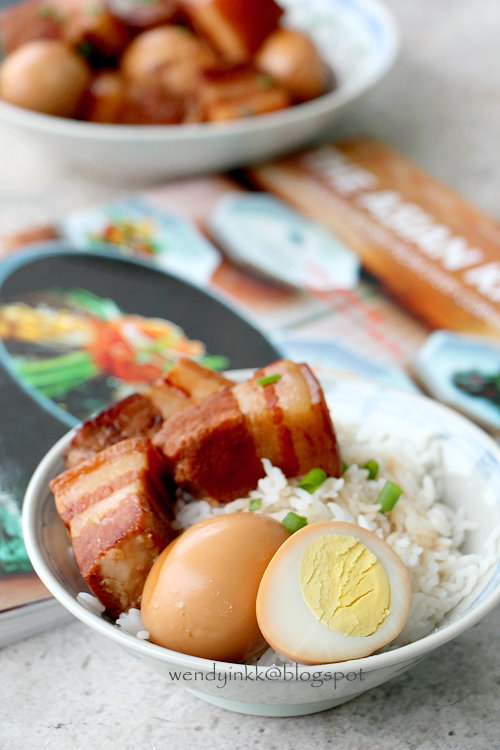 Reference:The Asian Kitchen: Fabulous Recipes from Every corner of Asia

1. Cut pork belly into large cubes. Marinate with garlic, palm sugar and fish sauce for an hour.
2. Heat a pan and put in 1 Tbsp oil. Sear the pork belly cubes on each side.
3. Remove the pork cubes into your stewing pot. Pour in 1 cup coconut juice into your pan and bring back to a boil to deglaze the caramel formed on the pan. Pour this brownish liquid into the pot.
4. Bring the pot of pork to boil, add in more coconut juice so that it covers the pork well. Let it simmer on low heat for 1hour 15-30 minutes. (recipe says 30-45 minutes, but I like mine to melt in the mouth). Add more coconut juice or water as needed, and add some black pepper.
5. Add in eggs and simmer for another 30 minutes. 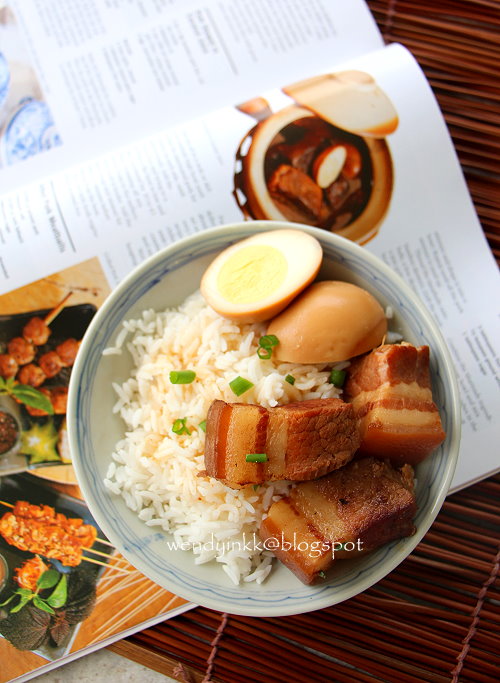 I followed the ingredients, but I used more coconut juice than stated, and more eggs. And a little wee bit of black pepper, like some online recipes do.

I followed the general method, except that I added the deglazing step and stewed it twice as long. 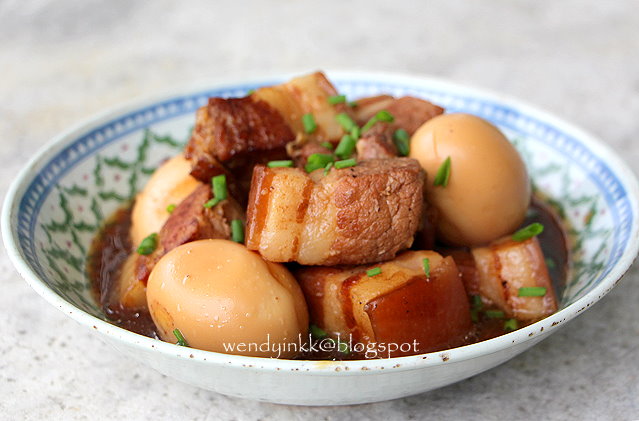 I didn't add in any additional salt or seasonings and it was neither so salty or sweet or anything else. Perfect! But then again, I will say, it depends on how much you reduce the gravy as well.

When the marinated meat was seared, it caramelized and it saved you the step of making caramel with sugar for this dish. The colour of the gravy is not from the use of any soy sauce.
My husband liked it. And it was so easy to make!

I was told by my friend Janie Nguyen to make more and leave it overnight as it will taste better. Busy mommies, that's a good tip, isn't it? 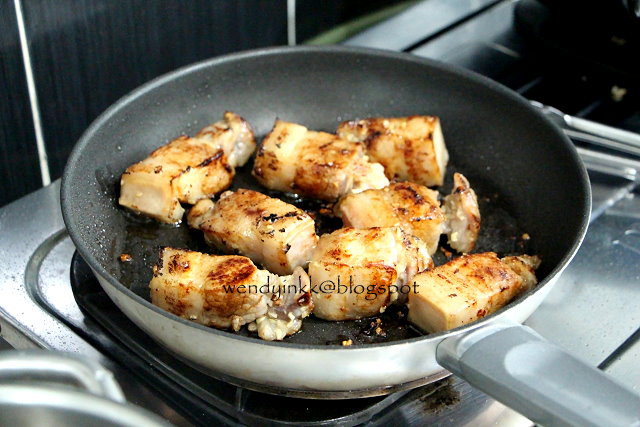 My first impression about the book was it didn't give me warm feeling as the pictures look very  'restauranty', like taken from an upper class really expensive restaurant. As the book was a compilation from a few authors, the book felt cold and distant.

There's the section about ingredients, utensils and an introduction to each country's cuisine. Recipes range from appetizers up to dessert. Recipes are well listed according to country or main ingredient. The featured countries are Burma, China, India, Indonesia, Japan, Korea, Malaysia n Singapore, Philippines, Sri Lanka, Thailand and Vietnam.

Generally, this book is a nice compilation of Asian recipes, quite a lot of recipes compared to the pages in the book, not less than a whopping 300 recipes!  If you love to read up on cuisine of other countries but won't want to own too many cookbooks, this book will be good. Imagine having a book each from all the countries. This cookbook also shares pictures with the other books published by Periplus as the recipes are not written by the author herself. It's a compilation.

Take note that not every recipe comes with a picture. But nowadays there's the internet, a quick search and you will know how the dish looks like.


But, take the recipes with a pinch of salt.
I had success with this pork dish, but I do have doubts with some others.

In Malaysia Singapore section, they featured Pork Ribs Wrapped in Pandanus Leaves. Hmmmm.....I have never seen this dish around from my travels around the country. Maybe they found this dish in some restaurant, but seriously I am in doubt. Try to google it, and you will find nothing, seems like no one ever ate this before. Except one website that reproduced the exact recipe from this book. 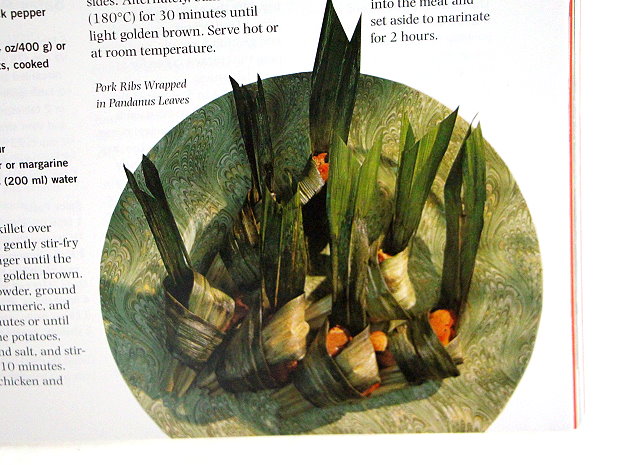 In the same Malaysia Singapore section, they featured Superior Wonton Soup, served in a bowl together with snow peas and mushrooms. All my 37 years of eating Wonton noodles everywhere.... I have no idea where this wonton soup came from to represent us with snow peas. It's not garnish, as it's part of the recipe. The broth is surprisingly made with celery, carrot and the other usual stuff. Celery.....celery. Seriously? If the recipe has soy bean or jicama, I will believe it but celery is a bit hard to digest. Maybe in a hotel, maybe.. but that's not the way Malaysian Chinese will do a wonton broth. 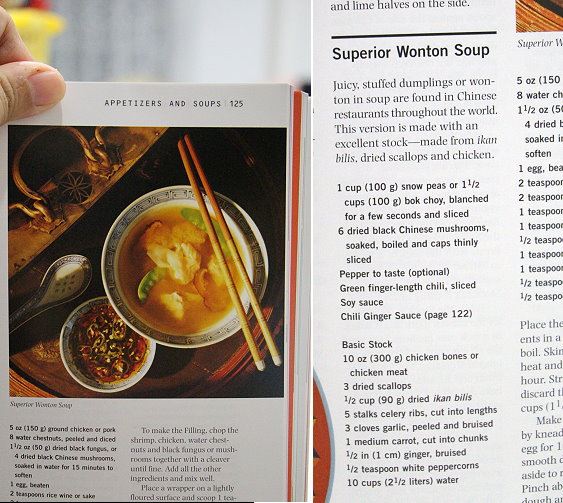 Besides these, there's some ambiguity regarding the ingredients. On Page 31, Rice Pancakes from Burma called for green peas, fresh or frozen. The picture shown, looked like chickpeas and a quick google confirmed it. 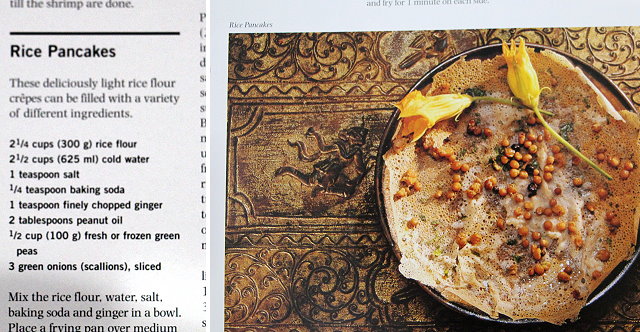 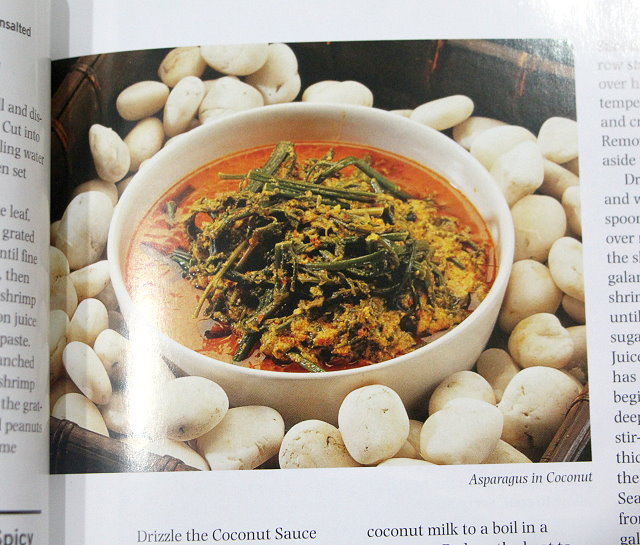 I didn't really read through every recipe, but these are the few that I noticed.

Well.. it's a compilation by a food writer and editor... not an cookbook written by a chef or cook.


Well.... it's still an alright cookbook, but you just need to be careful when you use it. Use your instincts and double confirm if you have doubts about it. As the recipe represents a country, it should be treated with respect and not adulterated until it doesn't resemble anything like it.

As for my dear readers.. from all over the world
The publisher is giving away copies of The Asian Kitchen to 2 lucky readers.
Enter the giveaway by filling in the column below.