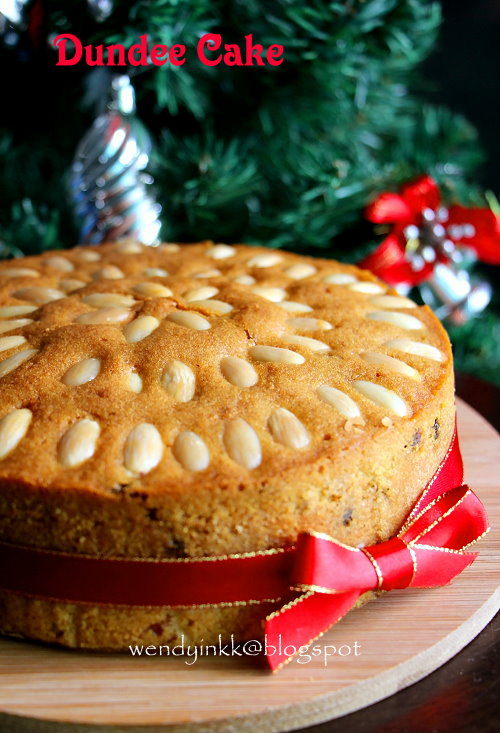 Dundee cake is a traditional cake from Dundee, Scotland. Traditionally, it should contain sultanas, Seville orange peel and decorated with almonds. But as time goes by, people tend to change the ingredients to their liking. I find most modern Dundee cake recipes not much different from other fruit cake recipes, other than the almonds on top. The original Dundee cake does not contain any cherries or currants, or any mix peel, but specifically Seville orange peel for that bitter orange tinge and sultanas, just sultanas. 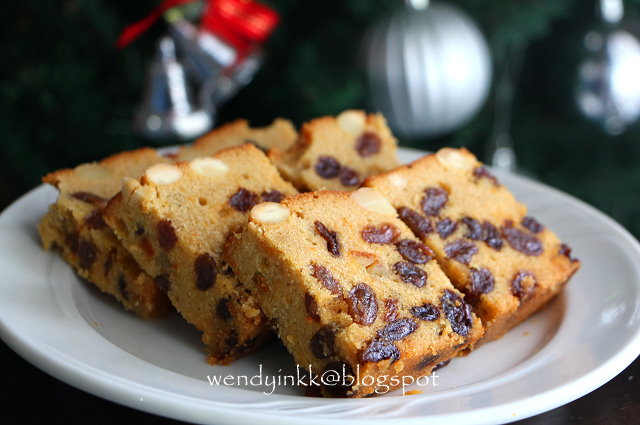 I calculated a 1kg cake based on the guidelines from the Scottish Government's website for a true Dundee cake. There wasn't an exact recipe given, but the ratios were there. With some simple mathematics, I tried to make up one.

There must be 27% sultanas, 5% orange peel, 1% orange zest and 3% blanched almonds. The ratio for other ingredients weren't fixed, but the list provides options for sugar types and almond meal. No liquids are used in this cake other than the whiskey. The sultanas weren't soaked but the cake didn't turn out dry. 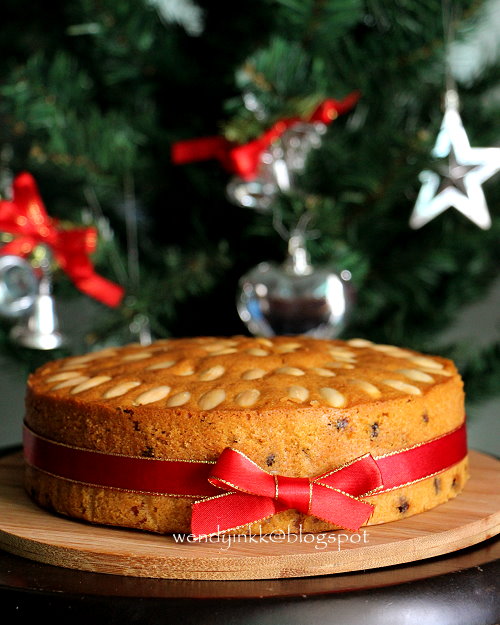 I made a few changes, not that I wanted to but I can't get the ingredients. I used regular orange as there isn't any Seville here, and I used Whiskey instead of Sherry, but whiskey is just as Scottish. I don't have any sherry nor do I want to purchase a whole big bottle. Anyway, sherry is an optional ingredient.

But other than that, I stuck to the recipe. The tricky part to baking this cake was determining the baking time and temperature. There was no guidance given. I'm glad the cake turned out well and golden. 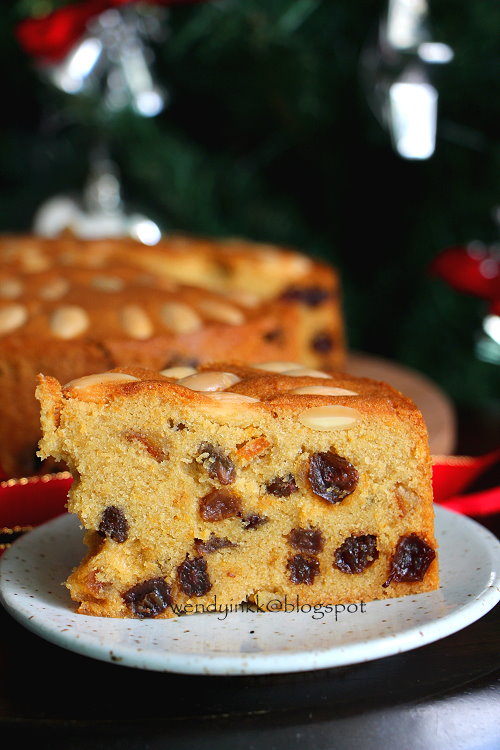 by WendyinKK
Makes a 7 inch round cake
Reference: The Scottish Government 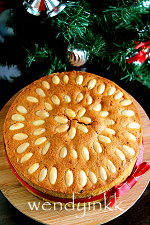 1. Boil some water in a small pan, and when the water has boiled, put in almonds. Let it sit for half a minute, then drain the almonds. Rub the skins off the almonds.
2. Cream butter and sugar until light and creamy.
3. Add in eggs, gradually and beat until smooth after each addition.
4. Add in peel, zest and whiskey (if using) and mix.
5. Mix flour and almond meal together and pour into the butter mixture. Beat the batter for 1 minute or two.
6. Add in sultanas and mix well. (let the batter sit as you prepare the baking pan and preheat the oven)
7. Preheat oven at 150C, BOTTOM HEAT ONLY, fan off.
8. Pour the batter into a pan (line the base and sides with non stick baking paper or greased baking paper.) Level the batter.
9. Arrange the almonds onto the cake, in a concentric pattern.
10. Bake for 1 hour on the middle rack, THEN turn on top bottom heat at the same temperature and bake for another 30 minutes, until the surface is brown.
11. Let the cake cool down and remove from pan. Keep the cake in an air tight container for at least a day before cutting. (I kept the cake without peeling off the baking paper, until it's time to serve) 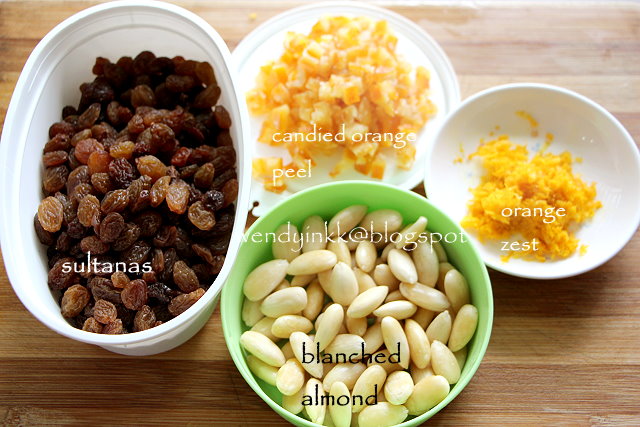 I won't recommend that store bought peeled almonds to be used. By blanching and peeling the almonds by ourselves, the nuts are moist and won't burn during baking. I arranged the almonds on the batter before baking and they stayed nice and golden. 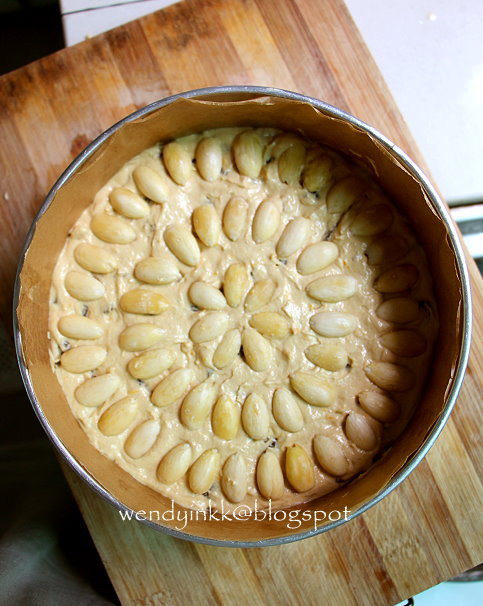 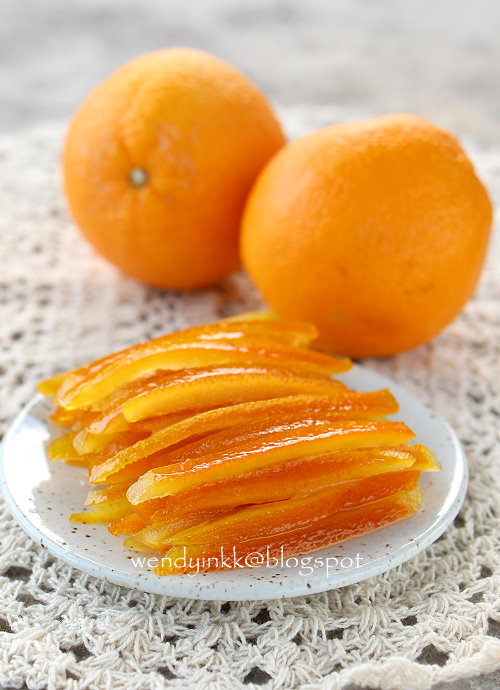 Email ThisBlogThis!Share to TwitterShare to FacebookShare to Pinterest
Labels: Cakes, cakes-butteroil, Christmas, From the net