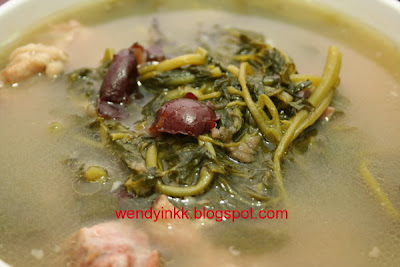 Watercress in Malaysia is not suitable for use in salads or eaten raw. Because...... they are grown in water that is fertilized by sacks of chicken droppings soaked in the ponds they are grown in. This way... I don't think one will eat raw veg bathed in chicken s**t water.. hehehehe.. lots of bacteria, and they may have a few slugs stuck between the petioles..
But hey.. without those precious stuff from the chickens, u won't get those fat juicy watercress from Camerons..

1. Trim leaves and tip off the main stem of the water cress. Keep them seperately.
2. Scald soup bones or ribs.
3. Boil 1.5L water and put in the stems, bones, red dates and peppercorn and simmer on med low heat.
4. After and hour and a half of simmering, remove stems and put in the leaves and tips of watercress.
5. Simmer for another 30-45 minutes and season with salt.


***
Usually my grandaunt will throw the stems away after simmering, saying that they are tough to be chewed. But if I'm around, she'll leave them for me to eat.

I usually see other people cutting the water cress into 2 inches length and putting the whole watercress stems in to boil together with the leaves... hehehe.. but not the way my grandaunt taught me.. she just retained the leaves and tips to be put in at a later stage .
Posted by WendyinKK at 3:42 PM