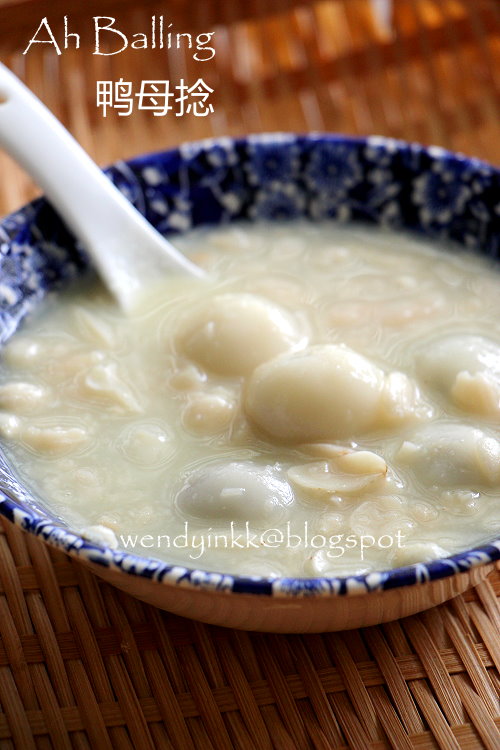 I've been slacking in my blogging lately..... I can't cope with work, family and blogging. So, I have to slow down. There are times when I felt liberated when I don't touch the computer, but I just keep on taking pictures of the things I make occasionally, not knowing if I'll ever write about them. My mind is still curious about food, thinks about new recipes all the time... just that I feel tired to blog. It's not easy to let go a part of me that I have built for 7 years

Glad that I still managed to cook this days ago.

Ah Balling 鸭母捻 is another Teochew dessert that is popular in Singapore. Generally, we know them as Tang Yuan. Why are these tang yuans called Ah Balling? The name actually reflects how the smooth tang yuans look like... like mother ducks swimming in water... in the Teochew dialect.

Traditionally it is not much different than filled tang yuan, but in Singapore, they are served with sweet peanut soup.  Although other syrup options are available, but peanut soup is the popular option.
I had this once in Singapore's Chinatown, opted for yam (taro) and red bean filling, and I was told that black sesame as one of the more popular fillings of choice. The peanut soup was utterly sweet like crazy, but very fragrant.


If you want the fillings to ooze out, mix them with some shortening or unsalted butter, probably 1/3 of the amount. Just a guesstimation as I will not do that, Just like how Liushabao has this lava like filling, the same concept should apply 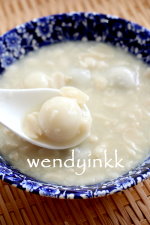 1. Rinse peanuts clean from dirt.
2. Bring 1L of water to boil. Put in rinsed peanuts and alkaline water/baking soda.
3. Turn off the heat, and let it soak for 4 hours at least.
4. Discard soaking water, and rinse the peanuts for a few times, and lastly, soak them in clean water for another 30 minutes. Drain.
5. Bring 1.5L of water to boil, tear pandan and tie into a knot, put the pandan knot into the boiling water. Put the drained peanuts in and bring back to a boil. Lower the heat and let it cook for around 30 minutes.
6. Put in rock sugar and let it cook until the peanuts are soft and melt in the mouth, it should take around another 30 minutes. (If you are using regular sugar, put them at the same stated time, so that the peanuts will be nicely sweetened with the boiling)
7. Add more water if water is reduced too much, turn off the heat and serve hot.

1. Place glutinous rice flour into a bowl. Make a well in the center. Put the 'fat' into the well. Pour BOILING water into the well, and stir with chopsticks or a fork. Knead the partially cooked dough to form a soft pliable dough, You might need to add 2 to 4 Tbsp of room temperature water.
2. Take a small piece of dough, and wrap in some fillings*. Seal well to prevent leakage. **
3. Bring a small pot of water to boil, and put in the wrapped dumplings. Let them cook until they float. Let them cook for another minute and take them out with a slotted spoon.
4. Serve with sweet peanut soup.

Tips
* I roll my pasty fillings and freeze them to ease wrapping
** I moisten the parts where I seal the dumplings and the dumplings seal tighter this way.


I am submitting this to Asian Food Fest Singapore Month,
hosted by Grace of Life can be Simple