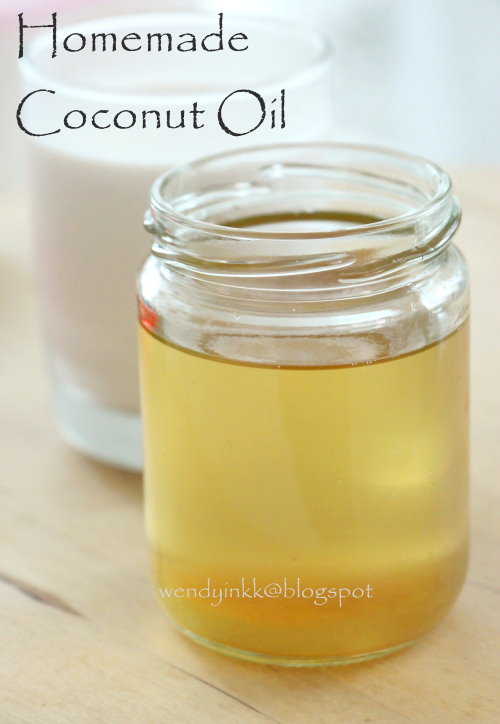 Coconut used to be the baddie for health concerned people.
All things coconut were bad! Curries were creamed with milk or creamers and coconut was shunned.
The local community said No No No to coconut laden food.

I on the other hand, have always loved coconut and didn't bother with all those health issues. I'm glad I never did.


You know what... I find it funny when some people regard coconut oil as healthy but says dishes cooked with coconut milk isn't..... The coconut milk taboo is still strong in our community. I can't understand the misunderstanding.

How to do it?
1. Place coconut milk in a pan, and heat it up, stirring it gently. I used medium heat.
2. Cook until curds form and the curds are brown and crispy.
3. Strain the oil. Let it cool down and bottle up.


How long does it take to get the oil out?
As long as it takes.


What type of coconut milk did I use?
Freshly extracted coconut milk bought from the wet market.
Stale coconut milk makes rancid smelling coconut oil that I personally do not prefer.

You can extract your own by putting grated coconut into a muslin bag, roll it up and wring it hard over a large bowl to collect the milk. You can add water if you want, but the simmering time will be extended due to the added water.

How much coconut oil will one get from a cup of coconut milk?
It's roughly 3-4 Tbsp.

But that depends on how the milk is extracted.
If water is added into the extraction, there's less oil in a cup.
If the coconut meat was soaked in water before it is machine shredded, there will be less oil per cup.

It also depends on the maturity of the coconut.
The younger it is, the less oil it has.

The picture below is when I simmered 900ml of coconut milk and got around 200ml of coconut oil. Didn't measure the outcome with a scale or cup, but it almost filled up my 250ml jar nicely.


How to use the curds?
The curds can be eaten as snacks or used to sprinkle on desserts, like on Maja Blanca.
You can use it to sprinkle on kuih kole kacang as well.
I think it will taste great on pancakes, waffles or ice cream.