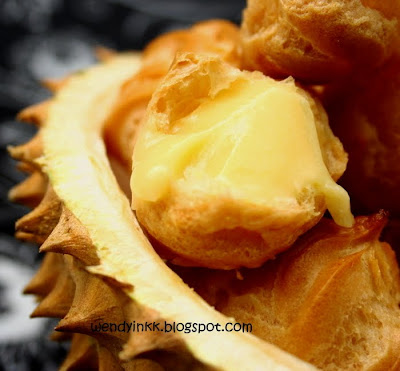 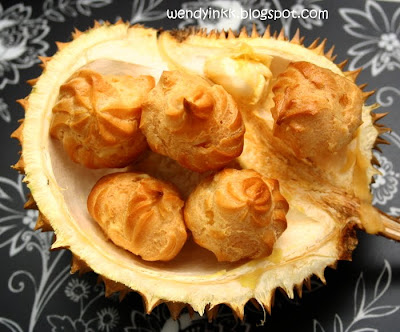 Remember there was this Durian Shoppe in Klang Valley few years back? They had these durian puffs which were so good. It’s durian season here again and this time, I’m gonna recreate that!!

It’s my first time making Choux pastry. One word---Tiring
Cos my Philips hand held mixer almost went “kaput” beating the eggs into the dough. I had to beat it for 20 seconds, stop the mixer, scrape everything back into the bowl cos they were stuck all between the whisks. Did this more than 10 times.. and I could smell the motor.. Ewwww!!

But no matter how difficult it was…. The outcome was really good. The choux balls were dry and very puffy.
I’ve eaten some custard cream puffs (sold in KK bakeries) that were soggy and chewy, and I have to say, my choux was an accomplishment *blush*****

After giving some to my neighbor to try, I immediately got orders for this Saturday 
kekekekeke!!!

1. Sift flour to remove clumps and mix with sugar, set aside.
2. Bring water and butter to a boil on low heat.
3. When butter has fully melted, dump (1) in at one go. Stir immediately with a wooden spoon, and continue to stir until a dough is formed, and it leaves the sides of the pot.
4. Remove pot from heat and leave to cool for 5 minutes.
5. Beat in eggs one by one, making sure each egg is fully incorporated before adding the next. Beat mixture until it is smooth and glossy.
6. Pipe or spoon mixture onto baking trays, about the size of a small lime/calamansi 2 inches apart from each other. Bake in a preheated oven of 190C for 10 mins and 170C for another 15 mins.
7. Cut a small slit immediately upon removal from oven to release steam from inside the puff.
8. Leave to cool down totally before piping in the filling.
Note: If u’re not using a fan-forced oven, u may need to jack up the temperature by 10C each time. And if u want to make larger puffs, extend the 2nd level’s baking time.

Adapted from: The Golden Book of Desserts (Publisher: Page One) 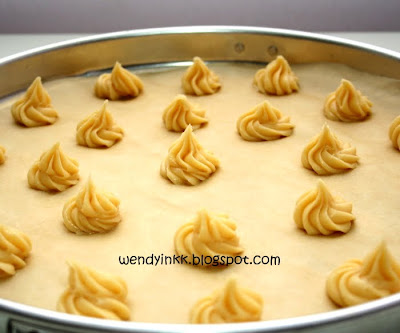 Before baked and after baked!! See the difference? But the pic below was puffs from 2trays, don't worry they don't get so so big that they were touching each other. 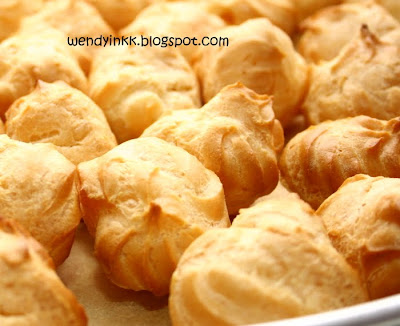 1. Bring milk and durian flesh to boil on low heat.
2. While the milk is coming to a boil, whisk egg with sugar until mixture turns pale. Put in custard powder and flour, stir to combine, make sure there are no lumps.Set aside.
3. Stir milk in pot, making sure the durian flesh looks dissolved. Bring to a boil. Prepare a strainer.
4. Strain ¼ of the hot milk into the beaten egg, and stir well.
5. Strain the rest of the hot milk into the egg mixture. Press the durian pulp to get all the milk mixture out. You’ll see the membranes and whatever insoluble fibres of the durian left in the strainer.
6. Return egg mixture to the pot and cook(stirring all the while) on low heat until custard is thick and no longer taste floury(at this point, if u think it’s not sweet enough add more sugar by the teaspoons, as the sweetness of the durian flesh may vary)
7. Cool custard and chill until ready to use.
8. To fill: either cut a large slit in puff and spoon the custard in or
put custard in piping bag fitted with a small(3mm diameter) round tip and pipe in through the slit that was cut earlier. 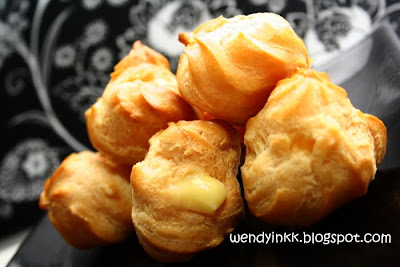 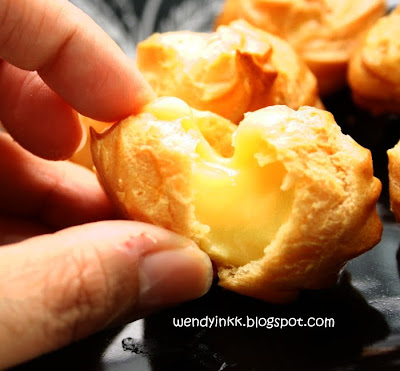 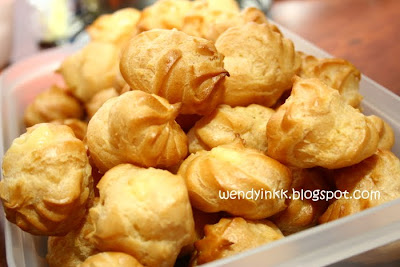 I made these again few days later with durians of lesser quality.. and I had to double the amount of durian flesh in order to get a good fragrance of it. And by halving the choux amount, my Philips handmixer did a good job. Saved u on that, Mike!
Posted by WendyinKK at 10:40 PM