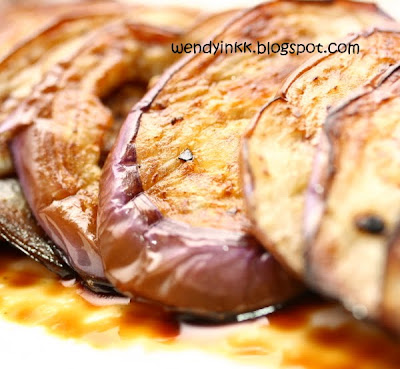 Eggplants or aubergines ... They exude a flavour non other can replace.
The skin is a major part of the flavour, w/o it, the fragrance is much much milder.

My grandaunt did not like to eat much of this "fruit", as she believes that it blurs the vision. Well, she couldn't risk her sharp vision that could still thread a needle at the age of 90. I don't think it blurs the eyes...I love it too much to believe it.

This is just a very simple way of cooking it, taught to me by my Big Kucheh, my father's eldest younger sis. Slowly pan frying it until it turns golden brown... and drizzle it with not so salty soy sauce. Simple, but yet, very very nice.

Elaboration: What I did was, I washed the eggplant, sliced it into 1cm thick pieces. Heat a wok/pan and put in some oil. Slide a few eggplant pieces in. If using a wok, the egg plants will automatically fill up the centre and soak up most of the oil. Just push them aside and put in more. So that the first few pieces will release the oil and let it flow down to the later pieces that is now in the centre. U have to lightly press them with ur spatula from time to time. Flip the eggplants one when side is golden. I place an oily piece over a not so oily piece and tap the oily piece to release the oil onto the non oily piece. This way, I don't use so much oil. These eggplants are oil suckers.
When all the egg plants are fried and golden, dish up and lightly drizzle with not so salty soy sauce. 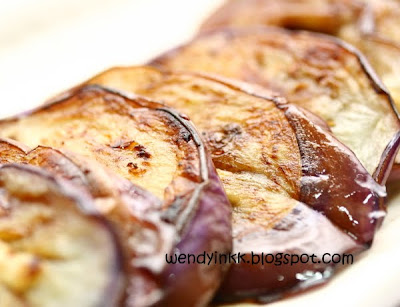 *variation: U can smother them with miso paste too instead of soy sauce :)