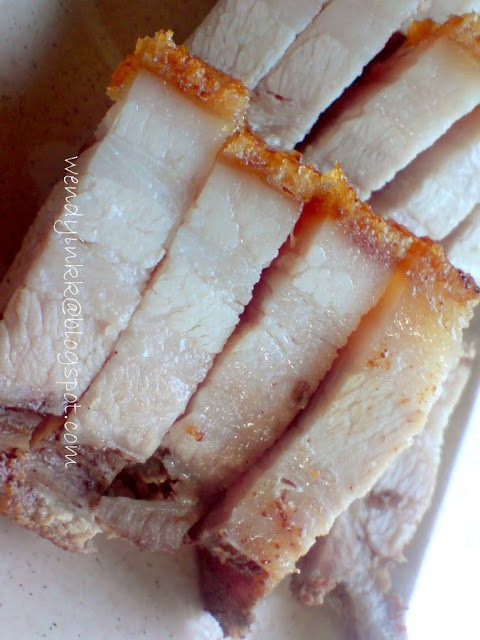 I did this baby 3 times before posting. These whitish pics are from my 3rd attempt. Took the whole piece of pork to Kampar to chop and feed my roast pork hungry brothers and everybody else who was anticipating this golden crackling pork to arrive. I brought along my camera but I left the memory card behind. I screamed when I found out about my dumbness. This was my nicest layered piece of pork!!!!!! So, in the end, the phone took the pleasure of capturing this prettily layered belly, rind-fat-meat-fat-meat-fat-meat. A special piece from my butcher.

Pork is not cheap. So is electricity. And when I want to do this, I want to make sure nothing is missing.
There are a few roast pork stalls and shops in Kampar, and at the old wet market area, there are 3 shops. One is quiet, one is popular and the other was so so, cos the pork comes out later in the day and they sell rice with dishes too.

Sometimes I buy from the quiet shop, only when I want to do stir fries with that roast pork, cos it's not really that important when the roast pork becomes the supporting actor. But when I want to make the roast pork the main actor for dinner, it's always those from the popular shop. Why such a difference? It's in the taste. The quiet one seems to have something missing. And the popular one seems to have something extra.

But actually my all time favourite is the one from USJ Taipan, Nam King restaurant's Chicken Rice stall. It's got even more flavour than the popular shop in Kampar.

Which is why when I made this, I made sure nothing is missing. And I sought the recipe with the most ingredients used, cos I don't want mine to be missing something somewhere. Indeed, this is my perfect recipe. I won so much approval from everybody who ate it and they raved and raved about it. I did tweak from the source of recipe by adding in garlic and this is the magic ingredient (and by halving the marinade for 2kg of meat, too salty already!!), cos I think it'll add a nice touch to it, overall, it's still pretty similiar.

The 1st time, I was elated to see it becoming pretty roast pork, but my chopping skills made them look less pretty. Maybe I was impatient and the pork was a bit too warm when I laid my cleaver onto it. Made the amount of marinade, but used only 2kg of pork, too salty!!!! And I didn’t clean my tray after the 1st baking, the 2nd baking with elevated temperature boiled the oil of the pork and made my kitchen into heaven when I opened the door, it was “misty” all over!!!! My house smelt like “urrgghhh” roast pork. My oven was splattered with lard!!! Everybody complained the meat part was too too salty. 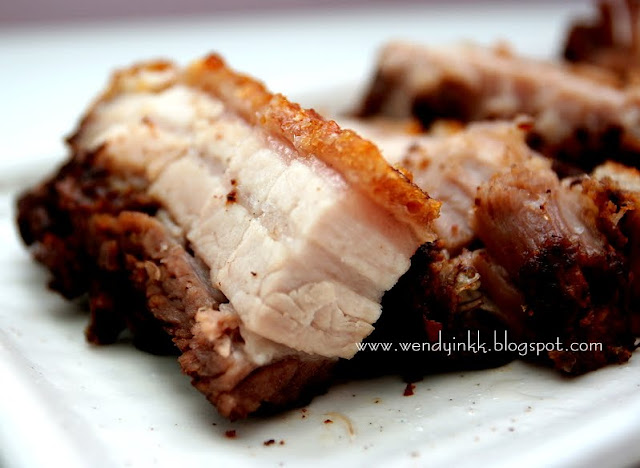 2nd time, was Chinese New Year 2010 and I was in rush to bring the big piece of pork back to Kampar, cos there’re hoards of Siu Yoke fans there and that is after chopping off a small part of it for Mike’s relatives in KK, which are more of Cha Siew fans. This time used the same amount of marinade, and doubled the pork to 4kg, and it was just nice. And because I couldn’t use the same rack I used before,this huge amount cannot turn around on the turntable in my Microwave Convection Oven. I used the grilling rack. I roasted the pork meat side up first for 30 minutes. Turned skin side up for another 30 minutes. (my oven don’t have bottom heat function, it’s either convection or grill, and with the grilling pan, there’s no way the air can circulate, so I had to turn the meat to face the heat.)Then another 40 mins for the skin to char on high temp. My house and oven was clean this time… due to the use grilling rack. Hah.. see, things were there for a reason. The grilling rack was designed that the oil drippings won’t be exposed, but the meat will remain dry. Hence clean oven, clean house. 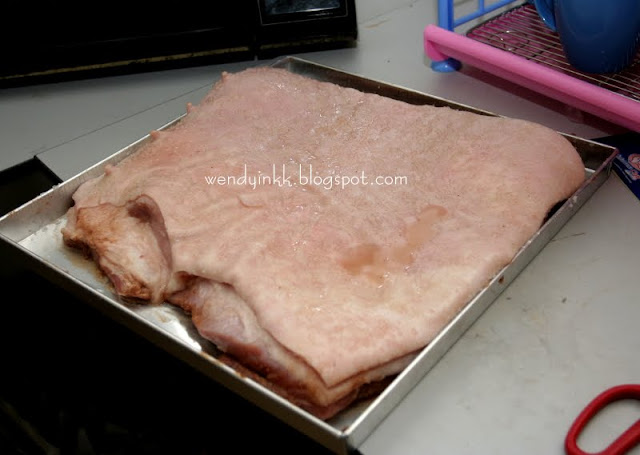 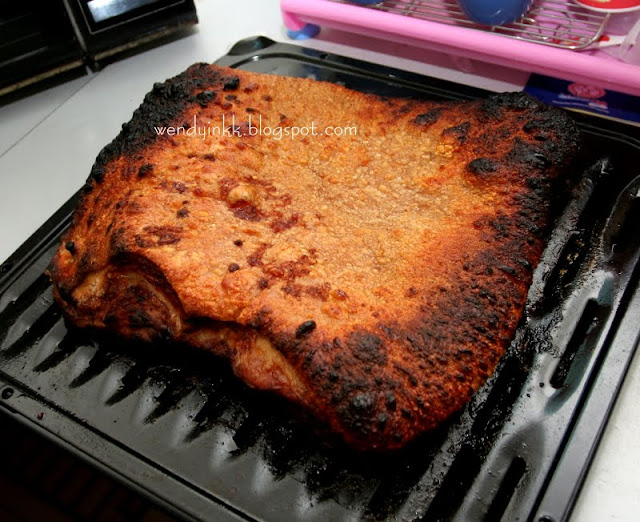 3rd time, now… the butcher purposely prepared a nicely layered piece for me when I told him I want to make pretty Siu Yoke. So nice of him, well, I go to his wife’s shop almost daily for lunch for almost 2 years.. Halved the marinade recipe and made 2kg of pork :). Small enough to go on the turntable, and I used the same method of roasting like my 1st attempt, on an elevated rack, but I cleaned the tray after the 1st baking. Did my kitchen turned into heaven again.. hahaha… I was in a little bit of heaven, but not as bad. It’s the juices (when mixed with oil at high temp) from the 1st baking that will send up the smoke, and the 2nd baking will release oil, lots of it and with no juice, the smoking effect is not that bad. So, if you cleaned or changed the dripping tray, it will be fine. So, will I use grilling pan or DIY elevated pan next time??? Dunno… see how big portion I’m doing the next time :)

So, here’s the recipe for 2kg of pork, tried and tested 3 times ;)
The skin remained crispy for hours, yes you heard me. Hours. I roasted the pork late morning and by dinner time, the skin is still crunchy, meat juicy. (and it was kept in a plastic bag) But please be patient and not chop it until it's totally cooled. Cos when it's warm, when you chop it, the hot juices will definately moisten the crispy skin and make it soggy. You definately won't want your effort to go wasted. Soggy crackling is just urghh!!!!

The instruction pics here were from my 1st time

To brush on pork (later during roasting)
2 Tbsp Rice Vinegar 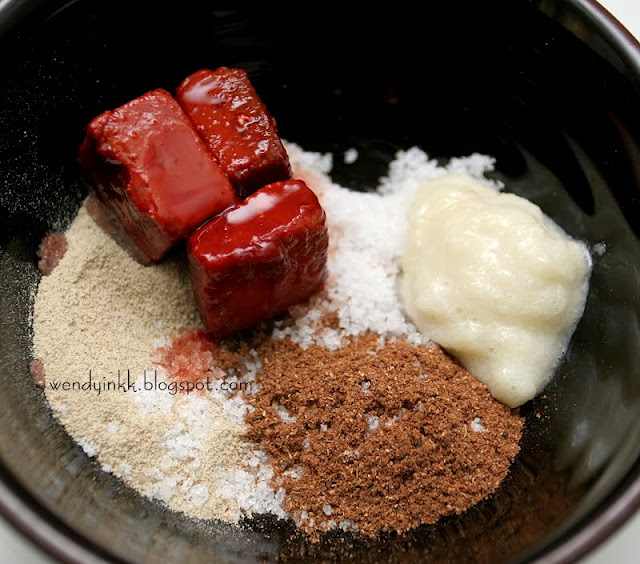 1. Mix bottom marinade together. Rub the underbelly with marinate, massage into every nook and cranny. 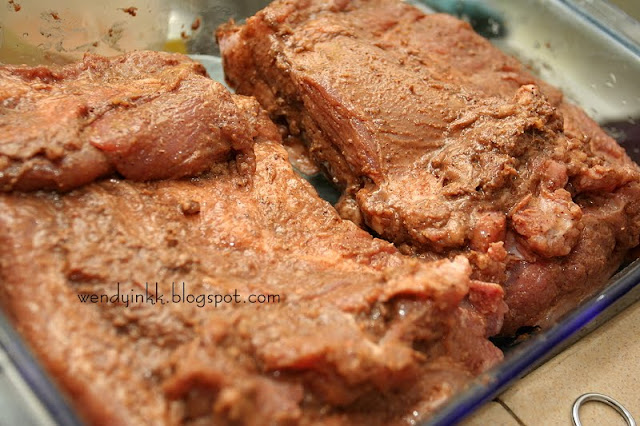 2. Overturn pork and put on salt. Rub and rub, only on the skin. 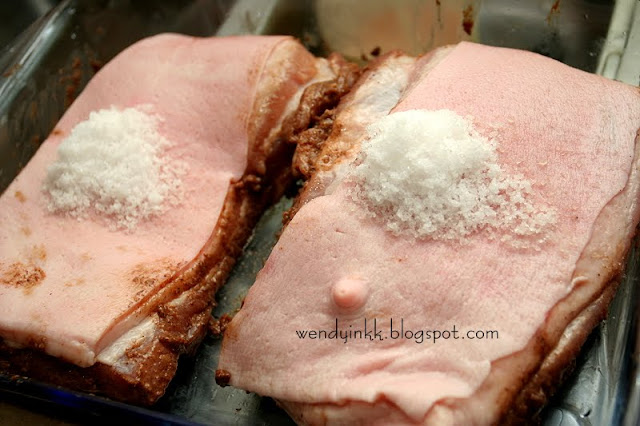 3. Place pork into the fridge, skin side up, uncovered. Yes, uncovered so that the skin will dry up. 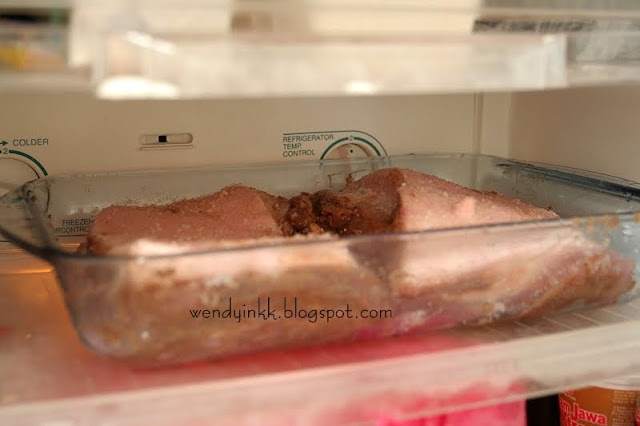 4. The next day, preheat oven at 200C/220C. (Top and bottom heat or with convection on)
5. Prepare an elevated roasting rack, with a pan underneath. Or just use whatever grilling pan that comes with your oven. 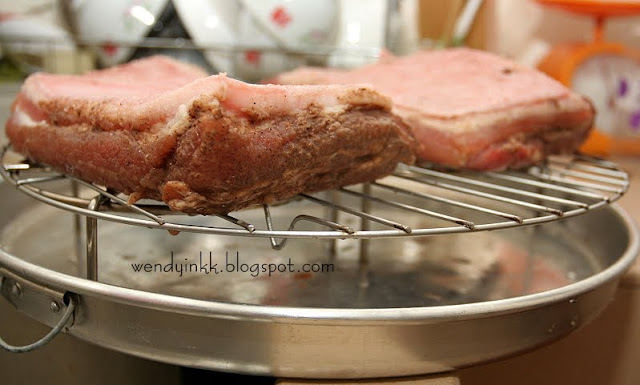 6. Roast pork for 40 minutes (if doing 4kg, you may need longer)
7. Remove pork from oven, and turn up the temperature to 250C (grill or top heat only).
8. Prick holes all over pork skin with a sharp knife or a bunch of needles (see pic),as much as you can 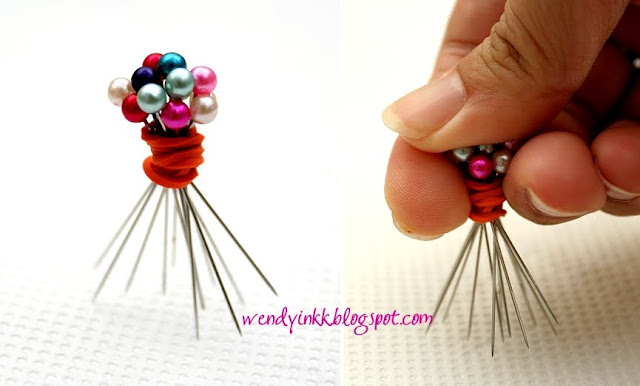 9. Brush vinegar over pork skin. Change the tray underneath or clean the tray.
10. Return pork(on elevated rack) to oven and bake for another 40 minutes or until the skin is slightly charred. 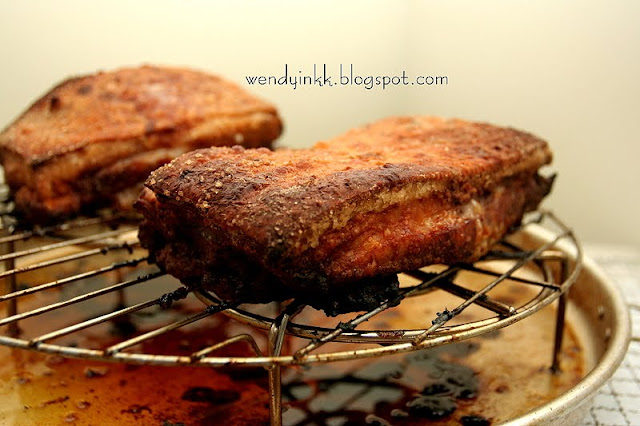 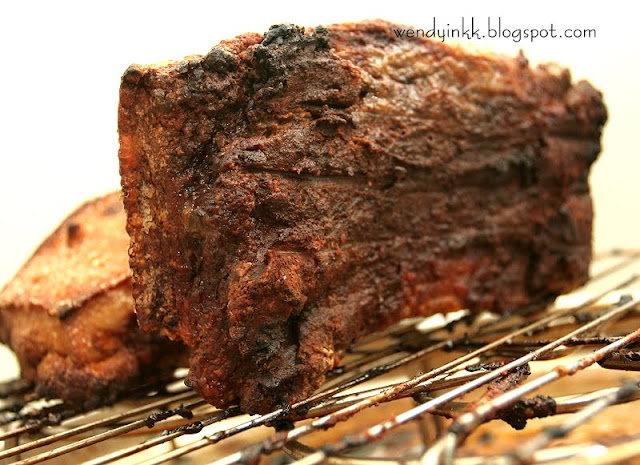 11. Scrape off the charred bits and leave it to cool down totally before chopping. 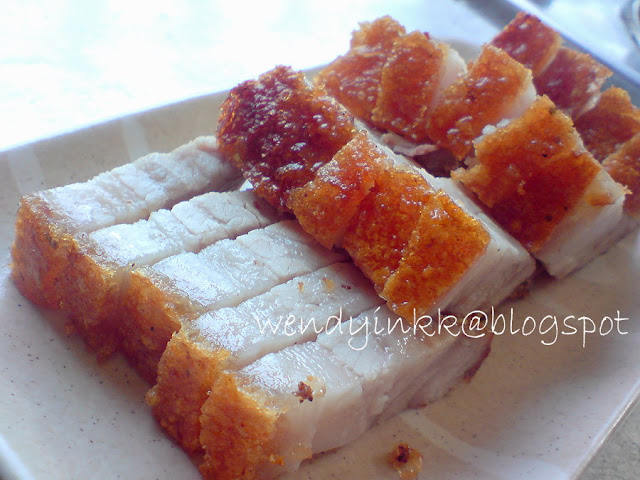 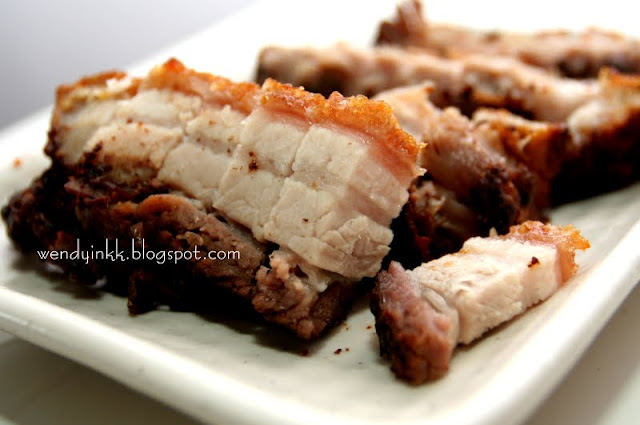 And if you're thinking of using this (fish scaler) to prick the skin, 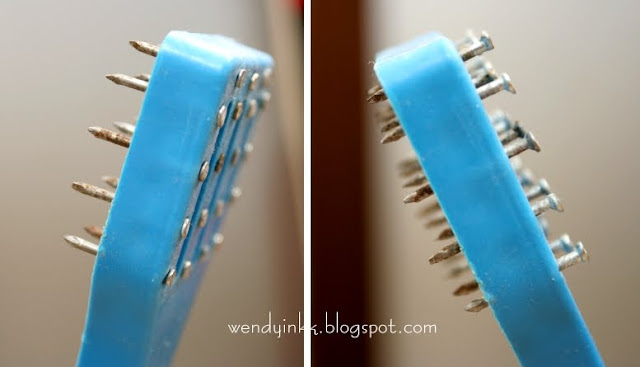 Forget about it. The pic on the right is how it became after one whack on the skin. The nails were pushed out and the pork skin went unharmed!!!!! That's now how I want it. I want to prick that skin, skin deep!!!!


Recipe adapted from: Happy Homemaker88
Posted by WendyinKK at 10:01 AM

Email ThisBlogThis!Share to TwitterShare to FacebookShare to Pinterest
Labels: From the net, Pork, pork-friedroasted, Traditional Chinese