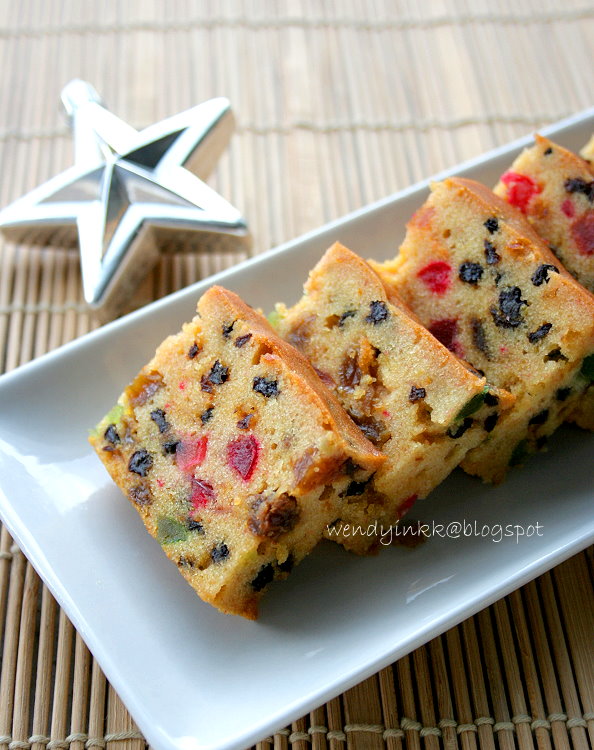 My mom loves fruit cakes. It's her favourite bake of the season. Well, actually she loves everything I bake, period. 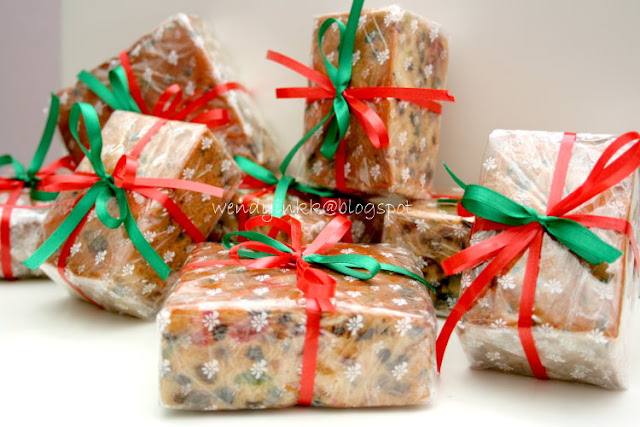 Is it now that I'm preggers that I'm not baking a storm for Christmas? Frankly, I don't and never do. I practise giving gifts, as Christmas is about God's gift to us. I don't bake just because it's Christmas, but my bakes makes personal gifts that my friends look forward to. And I usually bake something that can't be bought. In 2007, I made lots of Moist Chocolate Cakes for Church friends, 2008 I made three Sarawak Layered Cakes, cut and divided for a selected few(was heavily pregnant with Lyanne at 36 weeks), 2009 I made Surprise Eggs for Church friends and alcohol free orange fruit cake for neighbours. Do my church friends give me bakes as gifts too? Nah, but they do try to give me edible gifts like chocolates, candies for my kids or cute teddy bear pastas. I'm the only one who give bakes as gifts.
One cake that is strongly related to Christmas is fruit cake. Somehow I do not understand, why make fruitcake during Christmas season? Is it due to it being colourful, like the ornaments on a Christmas tree? But then again, I think it must be due to winter where only dried fruits are available and hence, Mince Pies and Fruit Cakes were baked for the occasion. It's more like a Western thingy rather than something with religious meaning. But then, it's good excuse now to bake it. 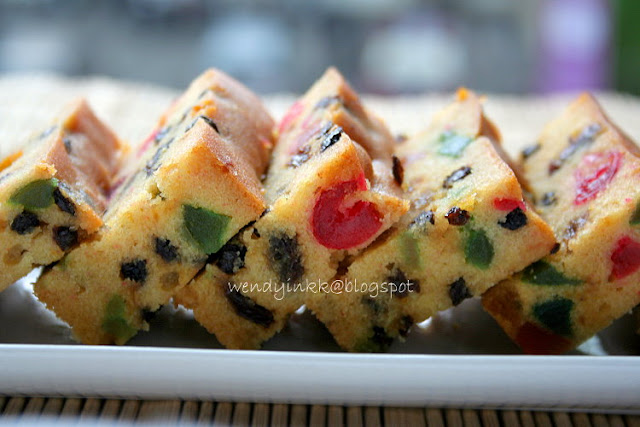 I made 2 fruit cakes this year to clear lots of dried fruits from my fridge. That's the best excuse to make fruit cakes, clear fridge, LOL. One was with liquor, and one without. The one without liquor will be cut, wrapped and given to my left and right neighbours who are my regular customers and to a few church friends. Scroogy hoh? One cake, divided for so many people! It's just a festive gesture. Here, it's usual practice to give some (doesn't need to be a whole cake) away, just for taste. Unless it's a gift for a specific purpose, like housewarming, then it's nice to give a whole cake. But then again, one whole fruit cake is like so much. And if I really do give the whole fruit cake, I think the recipient will be like, "Woah, how to finish this????" Fruit cakes are unlike other cakes where it can be easily "cleaned up".

** Yow Lin, Chiew Yoong, Susan and the Lee family who might be reading, guess you oredi knew what I'm giving u guys this year, kekekeke** 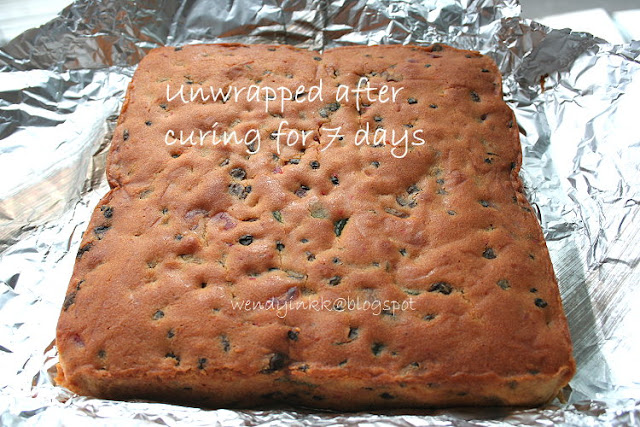 The cake above is with liquor and the one below is without. 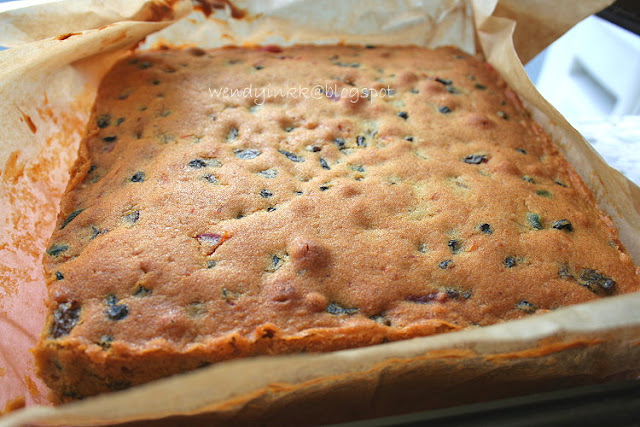 Finally, I'm being not too scroogy. Still am, but not as bad. Well, I used half liquor half juice for the liquor infused cake, hahaha. Not full liquor. I'm not that generous, even if it's for personal consumption.
But still, no nuts and no candied peels. I still prefer fresh orange zest and it to be all fruits.

And this time, I let Lydia use the knife for the first time. A dinner knife it was, and I watched over her all the time. She was happy that I let her help out. She still doesn't know how to put her finger in a safe position and how to use the pushing motion to cut, instead she was just forcing the knife down. Sometimes using both hands just to cut a cherry. Needs practice. 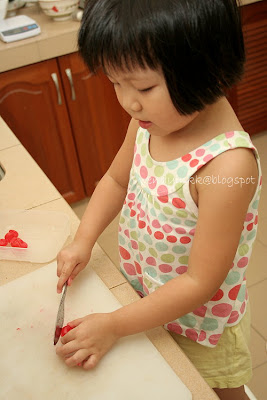 Combine everything except the cherries (I was worried that soaking in alcohol might release the colours) and cover. Let it soak overnight in the fridge. The next day, combine with coarsely chopped cherries while you soften the butter.

1. Preheat oven to 130/150C. Line a 8 inch square pan.
2. Cream butter and sugar until light and creamy.
3. Put in eggs one by one, beating well after each addition.
4. Sift flour into the butter mixture and beat on low speed until no clumps are seen.
5. Fold soaked fruits and all the remaining liquid into the batter.
6. Pour batter into pan, level and bake for 1.5hours.
7. Remove cake from oven and immediately drizzle Grand Marnier over hot cake. Pull down the side liners. Let it the cake air and when cake has totally cooled, wrap and keep for a week before comsuming.
(I kept the cake wrapped at room temperature of 29-35C, I find chilled butter based cakes do not taste as nice after chilling, the cake looks very good with no mould and fungus due to the presence of liquor.) 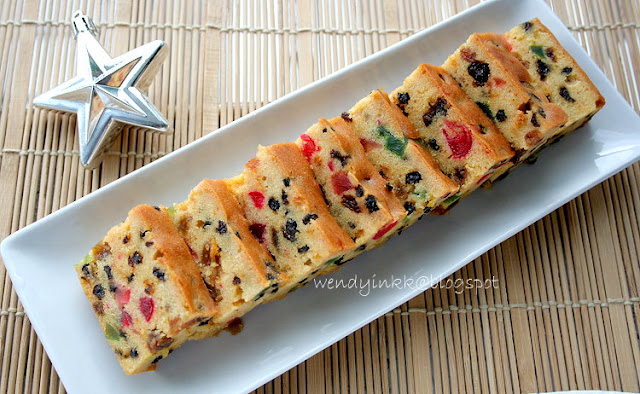 Verdict: Compared to the non liquor version, of course this is nicer. And slightly sweeter too, due to the liquor. But less orangy that the non liquor version because it used less zest. It is soft and moist, unlike traditional Western fruitcakes which are a lot lot sweeter and a lot lot denser. Just imagine it being a butter cake, but with fruits.

I'm sure most of you have read about Swee San's Christmas giveaway. I'm submitting this for that event.
She asked to include this excerpt, so I better do it, since she said it's a "MUST".

And I'm submitting this to Aspiring Bakers Dec 2010 challenge

I still have another Christmas post coming up tomorrow. 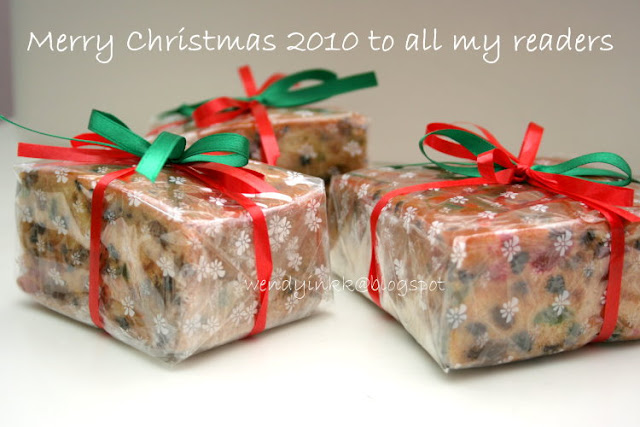