I'm back to staying home as a full time mother and wife. Left my life-long paying job. This is my first post after quitting but I guess I can't blog at the same pace as I did years ago.

Back in 2011, After I won Blogger’s Masterchef, we had a dinner with his side of relatives at SuperTanker somewhere in TTDI the same night itself. We ordered this plate of pork belly and my hubby loved it.

My man is a belly lover. He asked me, “Why you never cook such pork at home?” Actually it’s not that I never cooked such pork, but it’s not exactly like that dish. There can be so many variations and I bet he doesn’t even remember all the pork dishes I’ve cooked for him. I have the Spicy Fragrant Pork Belly, My Mom’s Pork Belly Stew and they are almost this way, except.. not dry. So, I take that as his request and did a recreation at home. 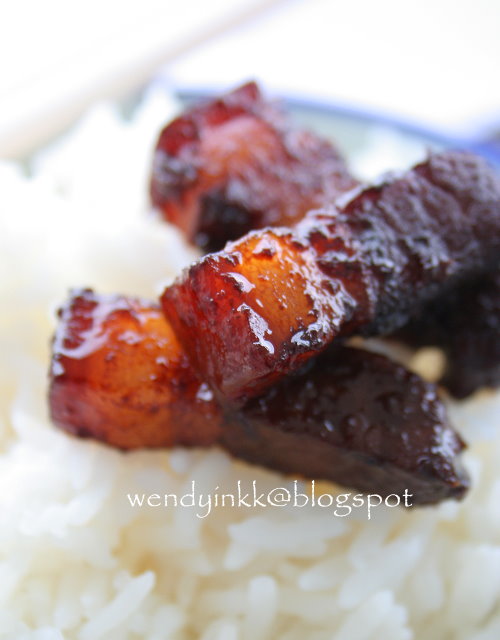 Not too far away from Super Tanker’s version, except, not as dark. I may have used a different soy sauce. But anyway, as long as it’s almost it, I have fulfilled his request.
Actually I don't remember the name of this dish. So I just renamed it.

And these pics were pretty hard to shoot, the meat is very dark and it was a mistake to pair the picture with white rice :) 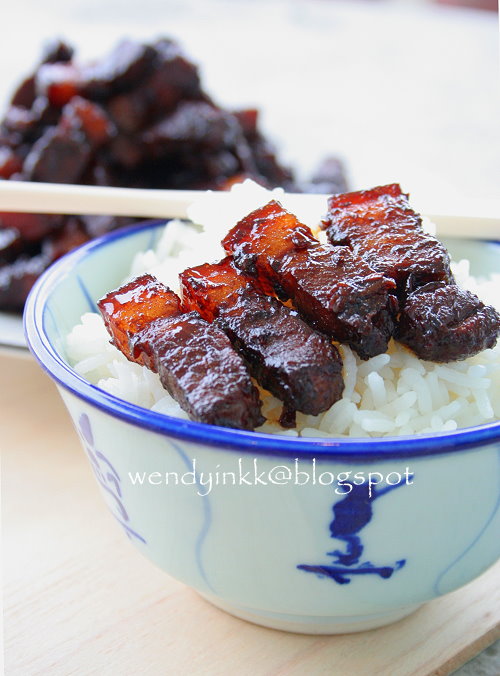 1. Cut pork belly into 2 large pieces and put in a pot, skin side down. Cover with water(just over the pork will be good) and bring to a boil. Lower to simmer for 15 minutes. Fish out pork belly and let it cool down. Cut into small pieces. Retain the simmering water.
2. Heat a pot (preferably heavy based) and put in 1 Tbsp cooking oil and cook garlic until fragrant. Put in bean paste and stir. Put in pork pieces and cook until it looks dry and smells fragrant.
3. Put in dark soy sauce and enough of the retained simmering liquid until it is almost covering the pork, not too much. Simmer on medium heat, lid on.. until the gravy reduces greatly and the fat layer looks almost translucent, meat should still look firm.
4. Add in sugar and cook until gravy dries up and you start to see oil on the base of the pot.
5. Dish up and serve.

Posted by WendyinKK at 9:30 AM