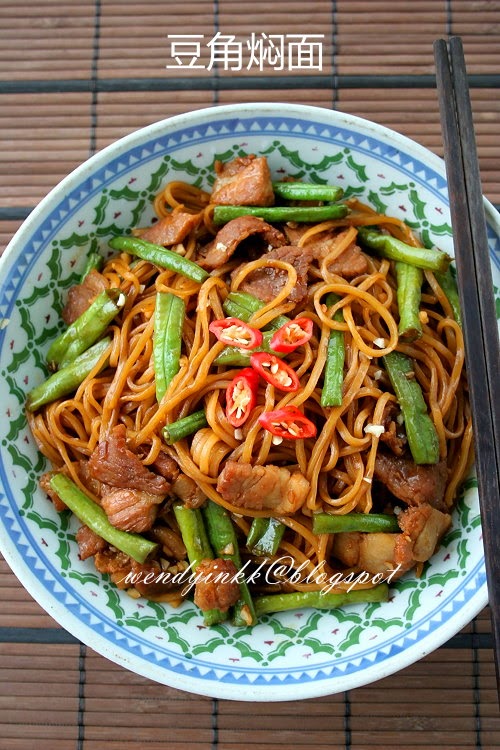 I first saw long bean braised noodles some time ago, and did more reading up on it. There are many versions online and finally I settled for this one. FYI, it's a popular noodle from Beijing

The first time I cooked this, I used store bought wanton noodles and followed the recipe to put in the raw noodles straight into the wok. It became a lump of goo that made me feel aweful. I felt aweful because I wasted dinner, the pork, the organic beans, the noodles....it's all money. Local wanton noodles are heavily coated with starch to prevent them from sticking,and so, if we put them in..chances are the starch coating on it will cook and make everything lump together. Why didn't I think of that? I was angry with myself 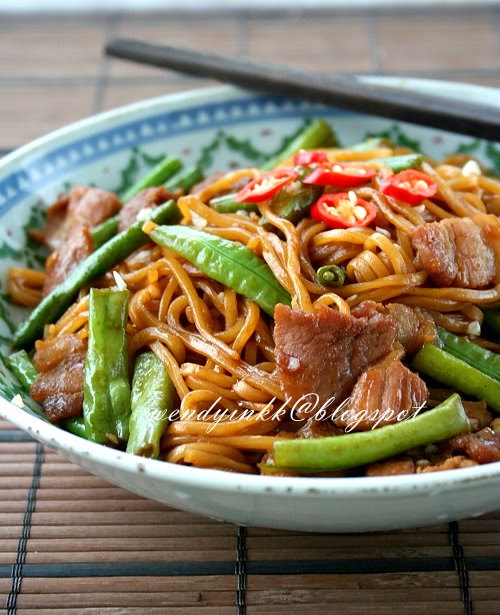 I really want to try this noodle again because I liked the taste, just that the final texture was unpalatable at all. this time I used home made egg noodles, or you can use fresh pasta that is still soft. Fresh ramen can be used but it must be blanched  and rinsed with water to remove the starch. Egg noodles will be a better choice than ramen because it won't turn soggy with braising.

The final sprinkling of raw garlic gives this noodle different touch. I used smoked garlic of which is not as "spicy" as raw white garlic. And I love the way that the pork is caramelized before it is drenched with water to make gravy. It won't taste the same if you were to just pour the seasoning and water without caramelisation

The end result made my son giving me thumbs up throughout dinner. It really warms my heart seeing him eating happily. 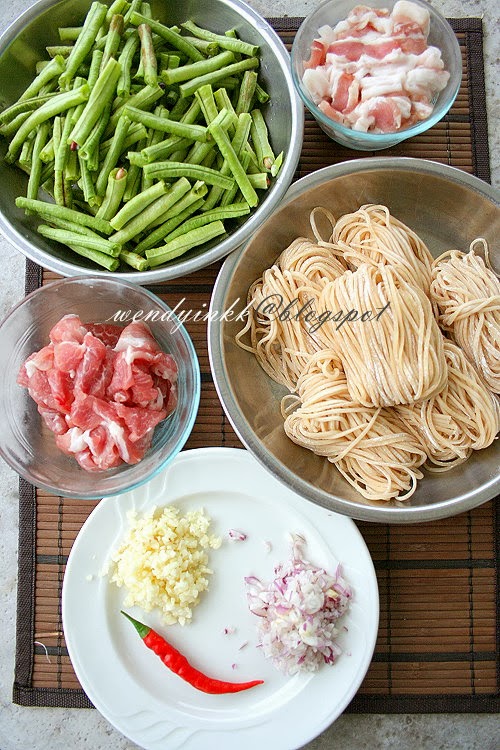 1. Boil a pot of water. Loosen the noodles and blanch for 30 seconds. Drain.
2. Put pork belly into a wok, and cook it on medium heat until it starts to release oil. Turn heat to high and cook it until it turns slightly golden. Push it aside.
3. Put in minced shallots and saute until almost golden. Put in lean pork and cook it until meat turns opaque. Push the belly back into the center and cook together with the lean pork. Put in sugar, toss it around for around 10 seconds, then put in light soy sauce and cook until the pork looks dry and caramelised, with a dark sticky thin coating.
4. Put in long beans and cook until it looks cooked, but not tender. Put in water and bring it  to boil. Season with salt (slightly undersalted) and adjust the colour of the gravy with dark caramel sauce.
5. Put noodles into the boiling gravy and braise it until the gravy almost dries up.
6. Turn off the heat and sprinkle the minced garlic over. Toss to distribute the garlic.
7.  Dish up and serve. 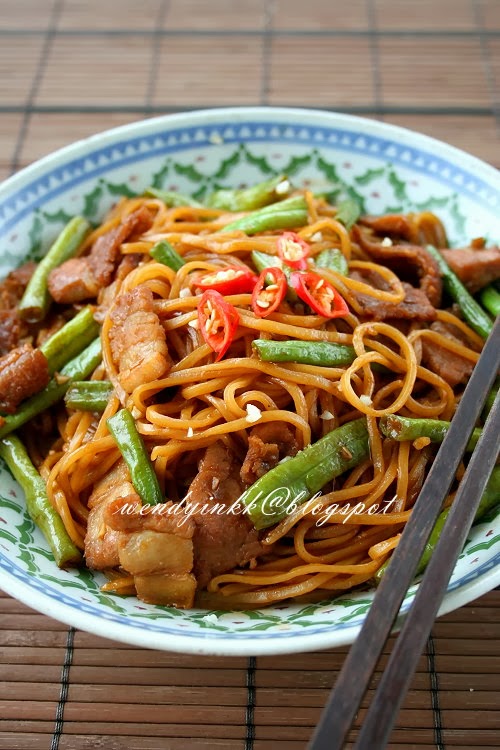 Posted by WendyinKK at 1:08 PM