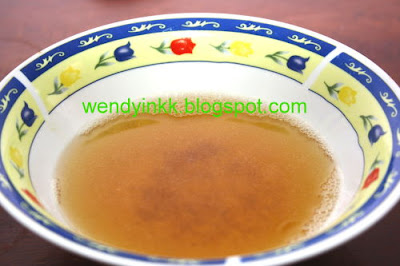 The Chinese comsume a lot of chicken during confinement, most of it going into soups and herbal concoctions.
It's one kampung chicken a day! Yup! One chicken to prepare only one serving.
Well, kampung chickens are the local variety of forest chickens that runs around freely. Let's say, it's a free range chicken that is not prized for it's meat, but for its qualities. It is believed that soup made from this type of chicken is more nutricious compared to a normal free range meat chicken.

Almost everyday, I take this during confinement, except on the days when I take double boiled hasma.

So, here's how it's done

1. Put in 3 slices of angelica (dong gwai) into a big bowl.
2. Cover the angelica with a small bowl.

3. Chop Kampung chicken into smaller pieces for easy handling.
(skin and excess fat should be removed from the chicken) 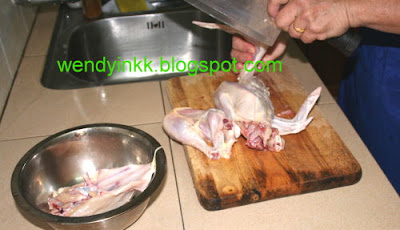 4. Use a cleaver to chop and smash the chicken parts in it's bones to break up everything.
(it'll look like roadkill)

Can u recognise what part of the chicken this is??? 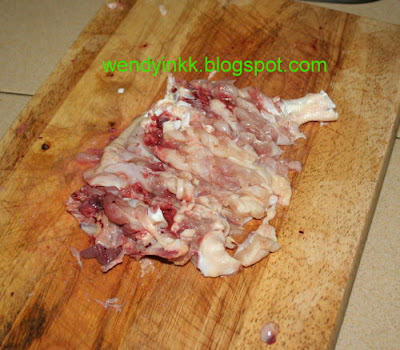 5. Put the "chicken" into the big bowl, surrounding the smaller bowl.

8. Prepare half a pot of boiling water. Place a rack in the centre.
9. Place covered bowl onto the rack. Make sure the boiling water is half way up the bowl.
10. Let the water boil for another 10 minutes and turn to low heat to slowly double boil the chicken for 3 hours. You must cover the pot!

11. After 3 hours, turn off heat, and let the pot cool down to an easier to handle temperature.
12. Remove the pot cover and the covering plate. Remove bowl of chicken from pot.
13. Remove chicken bits from bowl. (the bowl looks dry, but don't be fooled) 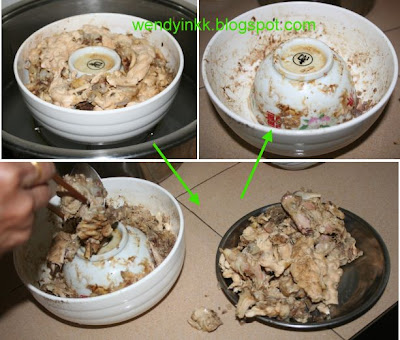 14. Remove the small bowl and you'll release the trapped chicken essence underneath.
15. Strain the essence to remove excess oil. The chicken essence is ready to be served.

**This can be done with other herbs as well, eg: Cordyceps. Just replace the angelica in Step 1 with prefered herb. 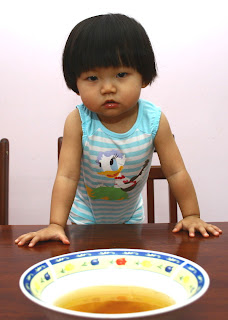 Lydia is eyeing the chicken essence..wanting to taste it..
But I didn't let her, angelica is not advisable to be fed to small children.