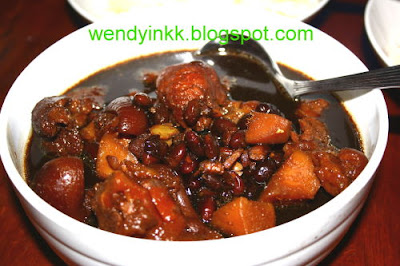 Tomorrow will be Lyanne's 12th morning.

Today is just the 11th day, we're making it a day earlier so that there will be more people eating it. Tomorrow's Sunday, and Mike's shop's closed, that's why there's less people around.

I'm a Cantonese, and according to Cantonese traditions, on the 12th day, we're supposed to eat Pork Trotters in Black Vinegar. Some even give this dish away to relatives and friends as gifts.

It's not confined just as a confinement dish..
It can be served on any other day, just that on this day, the 12th day of confinement is celebrated with this dish.

** Be warned that I like mine really sour. Do not add the whole bottles of vinegars without tasting in advance. 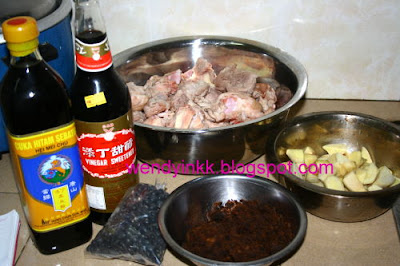 Method
1. Wash and dry black beans. Dry roast them on the wok on low heat until they start to crack. (this step can be done in advance) 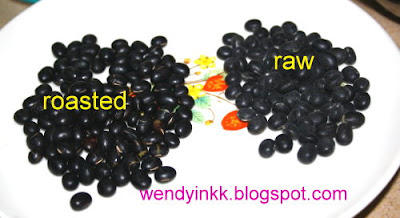 2. Place the beans in a big pot and boil them in 1.5L water for an hour.
3. Meanwhile, scald chopped pork trotter. Drain well.
4. Heat wok and put in sesame seed oil.
5. Put in ginger and saute for a minute.
6. Put in scalded pork trotters and salt. Mix well and fry until dry.

9. Pour in both black vinegars and sugars. If too sour, add in more white sugar. 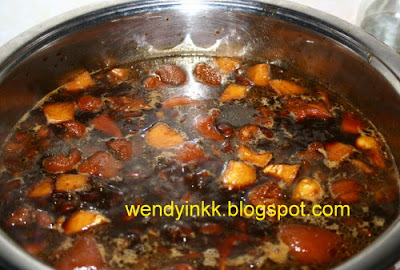 10. Bring to a boil and simmer for another 10 minutes, and turn off the heat.

****** This version is very sour, just the way I like it. If u can't stand the sourness, u can reduce the amount of vinegar used, or just dilute it with more water. 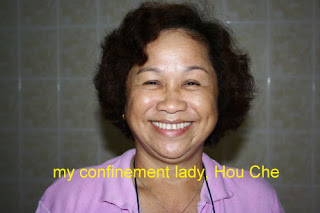