Last year on this day, I gave birth to my only son.
It was a prayer answered. I prayed that I will have a delivery in the afternoon because for the 2 girls, I was hecticly rushed to the hospital at 5.30am.
This boy is nicknamed "Kim Soon" in Hokkien meaning gold grandson. LOL. The only male grandchild.
But he ain't going to be pampered, not by this tyrant mom. I promise him he'll wash dishes, sweep the floor when he is old enough for it. 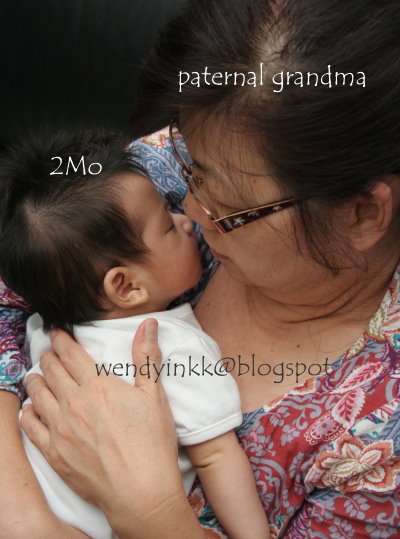 At first we thought, oh boy, this boy is soooooo good to me. Sleeping at regular hours and 8 hours straight by 10 weeks. And by 14 weeks, 10 hours straight, waking up for feed when the sun rises. I was so blessed.
But then, by he was 5 months... he started having itchy gums and would wake up to suckle whole night long.  After having 2 weeks of suckling marathon, my back couldn't take it anymore and he was weaned.
Lyanne also started night feeding at the same time, 5M, and it stopped until she had all her teeth. But Lyanne has a few stops, at 8M-10M, 15M-18M, and there was a 10 hour sleep gap. But this isn't the case with my boy. I do wish he will stop soon. 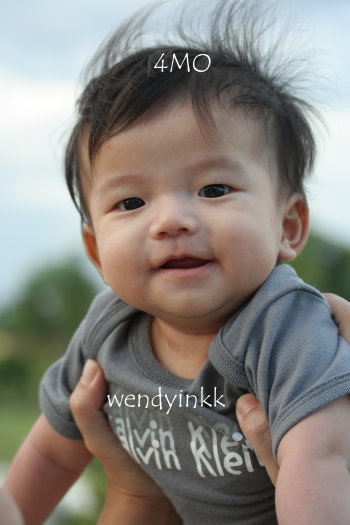 At first I made him diluted milk, he will suckle half the bottle and throw it away. It's not nice. LOL. That's how I made Lydia stop night feeding when she suddenly started it again after Lyanne came. Give them disgusting diluted milk. But no, now Reuben will still drink it all. He will just take it, and has learnt to appreciate bland formula!!! Arrrgh!! *Pulls hair*
I can't feed him water like how some say as my hubby cannot stand him crying. So, I have to give Reuben something that will stop his cries, it's milk. He's not on pacifier (Lyanne) nor is he sucking his thumb (Lydia). He needs milk to soothe him as none other will. 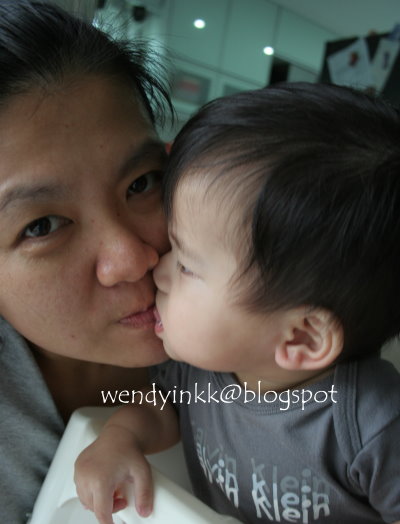 He loves his food, Oh my. He hates it when his bowl gets empty. He will wail and scream and squirt all his tears out. He seems to have a bottomless pit. No matter how big the bowl of porridge is, it never seems enough for him. But I do not feed him as much as he can take. I do control his portions. Some people told me he looks malnourished, so skinny. But oh my, he's so heavy. Is being chubby with lots of soft soft fat means that the baby is healthy? What about density? That doesn't count? He has a healthy weight and to me that is definitely more important than looking chubby for others to say he's healthy, visually.
He's a smart boy. He's got sharp visual skills and knows how to work his way around things. Although he has 2 elder sisters, he enjoys buses, trains... boys stuff more.

He actually learnt to sit, before he could flip! He sat at 5 months, but flipped at 8.5months. He refused to be flipped (Yes, we flipped him to inspire him, but he doesn't like it, at 6 mths). all my girls flipped at 5M. This is the only kid that crawls around the house.
He loves water. He loves floating in water especially from 2M-7M. If he doesn't get to float, he will make a fuss. When he was just a few months old, and he cries for no reason, then it's just that he wants to bathe. Yeah, once we took him to KL, and he fussed for 3 hours because we had to rush out for dinner, so couldn't bathe him yet. We gave him milk, let him suckle, none will soothe him, keep on whining and fussing. He only stopped fussing once he bathed. Everybody had a good laugh that this boy loves his bath soooooo much.
Somehow this boy doesn't like to sit still. Won't watch Barney, won't watch any baby shows, won't sit still in the high chair being strapped so that I can mop the floor. So, this makes my hubby not want to bring him out. It's hard to control a screaming boy trying to escape from his chair all the time.
My friends told me, boy and girls are very different. Once you have 2 boys, you won't hope for another baby. But if one has 2 girls, one will still dare to try for another baby. Oh yes, one boy and I had enough. LOL. Luckily he enjoys playing with the sisters and the sisters play with him. It'll be soon that I will be free and all 3 kids will be enjoying each other's company with me intervening once a while, something they hope I will not do often, LOL. 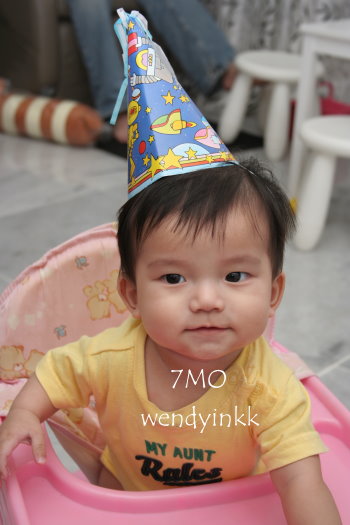 So, what will I be doing for his birthday celebration?
Errr.... no idea yet.
I am waiting for his Aussie grandaunts to confirm the date as they will be back in KK somewhere in June.
He can wait....
Happy Big 1 Reuben,
Be a good boy,
Be a good brother,
Be a good son.
Love and kisses to you.
More pictures of him on Sunday, and a baby food theme coming up.
Posted by WendyinKK at 1:58 PM

Email ThisBlogThis!Share to TwitterShare to FacebookShare to Pinterest
Labels: Birthdays, My Kids