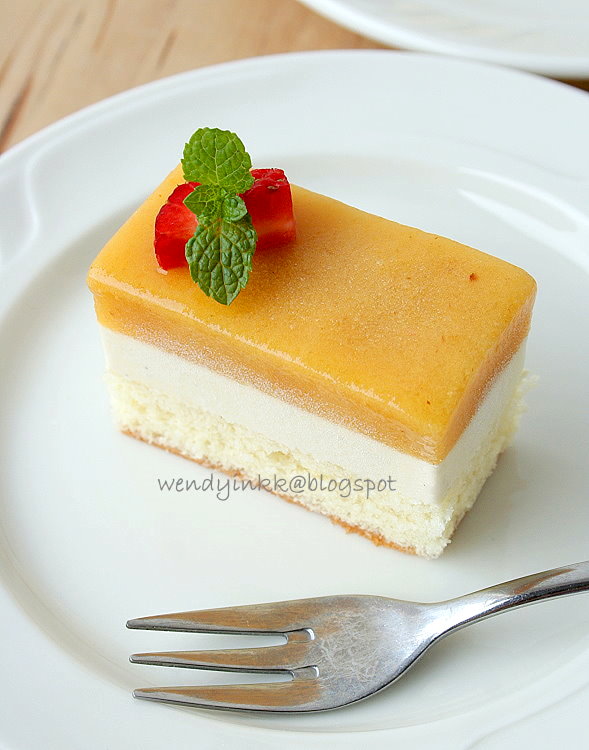 Gosh, I wasted so many peaches when I planned on making this. I bought some, didn't have time as it was CNY. Some grew mould before I had the chance to use it. And I bought more and more peaches, each time telling myself ,"get ur butt moving!!". I finally made it in April this year.

Australian peaches were selling for RM4.99 per fruit that time. Recently I saw in Jusco, American peaches are at RM3.99 per fruit. But you can use canned ones for this, but the taste will be somewhat stronger. But if you like the taste of canned peaches, I don't see why not.

My girls loved this so so much and it is definately far better than store bought ice cream as this is made from real fruit, real vanilla and contains dairy cream. Store bought ice creams are mostly flavourings and made from non dairy cream that is made from palm kernel oil. Well, I still buy ice cream once a while but I do make ice cream every now and then to give them something better. I do not own an ice cream maker yet, so, my ice creams are mostly semifreddos, of which are frozen without futher beating. May not be as smooth, with some ice cystals, but then, it's good enough for us.

The cake used in this recipe is the same cake from the Strawberry Mirror Cake, of which it doesn't harden at all when chilled and will soften very quickly after removal from freezer because it contains neither oil nor liquids. 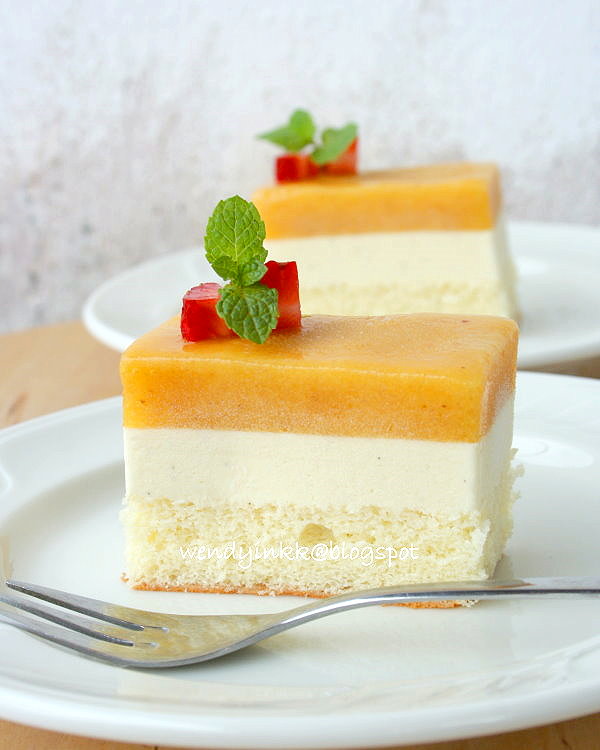 1. Dip peaches in boiling water for 3 seconds. Peel off the skins and dice.
2. On medium low heat, cook peaches in water until soft.
3. Turn off the heat and add in sugar. Stir to melt.
4. When it has completely cooled down, puree peaches together with all the liquid.
5. Mix in lemon juice and liquor.
6. Place in a freezerable container and freeze for 2 hours.
7. (should look half frozen) Remove sorbet from freezer and either beat it with a mixer or hand held blender.
8. Place sorbet back into freezer and repeat the beating an hour later, and every half an hour thereafter twice.

*the frequency of beating depends on the condition of the sorbet. Different freezers work differently, so does the size of the freezing containers. Wide surfaces speeds up the freezing . The final twice beatings should not have anymore visible liquids.
*If you are using canned peaches, use 8 pieces of halves. Puree with 100gm of the liquid. Taste. If it's not sweet enough add more sugar, then continue with step (5)

1. Beat egg and 50gm sugar until light and pale.
2. Bring milk and vanilla bean to a simmer. (do the next step if using vanilla bean) Let it sit, covered with lid for 5 minutes.
3. Strain (if using vanilla bean) and pour into the beaten egg.
4. Return egg mixture to saucepan and cook until it coats the back of the spoon (you will feel it thickened), but be careful not to boil it. Turn off the heat and let it cool down totally. You can do this step one day ahead and keep the mixture chilled. (this is the custard)
5. Do this step just before final assembly, and only after the cake is ready. Beat whipping cream with 50gm sugar until soft peaks. Fold in the chilled custard and use immediately for assembly.

1. Preheat oven to 180/200C. Line a 10 X10 inch square shallow pan.
2. Beat eggs whites until foamy, then add in cream of tartar. Beat until soft peaks, then add in 20gm of sugar and beat until stiff and glossy.
3. In a separate bowl, beat eggs, egg yolks, and 100gm sugar until creamy, pale and light. Beat in vanilla.
4. Sift cake flour. Fold into egg yolk mixture.
5. Stir in 1/3 of beaten egg whites into egg yolk mixture. Then fold in the rest of the egg whites.
6. Spread batter evenly in pan. Bake for 12-15 minutes.
7. When cake has cooled, remove baking paper, trim cake to fit a 9 inch square pan snugly (Line it if doesn't have a removable base). Place cake in pan skin side down. Cover and place in freezer. (This step can be done ahead of time)

The whole work process.
Pan size : 9 inches square cake pan with removable bottom
You may use a freezable plastic container or a non removable bottom baking pan, but remember to fully line the container with overlaps so that you may lift the ice cream cake up to slice.

1. Prepare peach sorbet the day before
2. Prepare vanilla custard and chill.
3. Bake cake, trim and put into the final freezing container/pan.
4. Whip cream and finish the steps for vanilla ice cream
5. Layer the ice cream onto cake and freeze.
6. Layer on the peach sorbet. Freeze.
7. Remove frozen cake from pan and let it rest in the fridge for 10 minutes before slicing.
8. Line each slice with flattened muffin liners and keep frozen in a covered container (I use Tupperware freezermates)

*If you didn't keep this cake properly after slicing, the cake will dry out and won't taste good anymore. So please keep it frozen 'air tight' in a container. My cake kept for almost one month and they were fine. 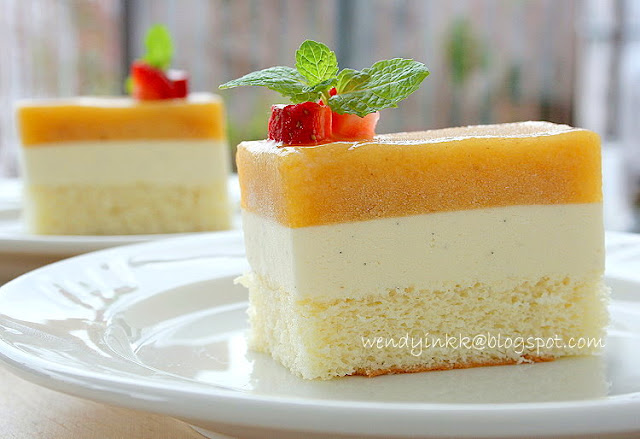