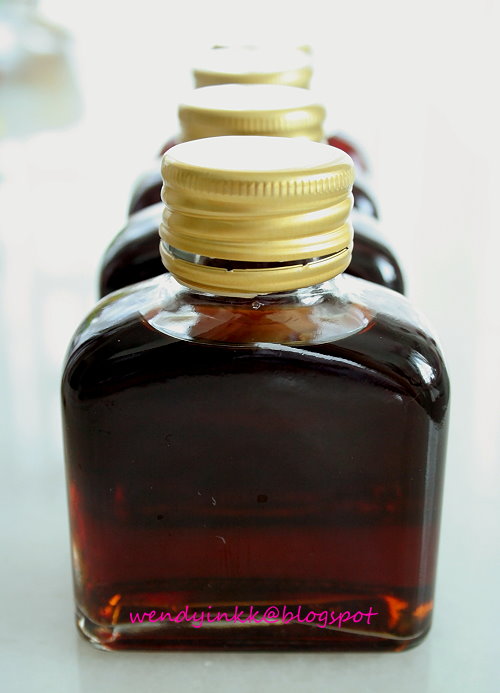 I still have more than 1000ml of Nielsen Massey Madagascar Bourbon Vanilla Extract when I made this. I knew the homemade version will take quite a while before it can be used, so I made it 1 year ahead. But I decided to give them away this year for Christmas as they were ready by now, dark and fragrant. I’ll make more later when I’m halfway through my big bottle.

For those who don't know that there is real and fake vanilla.... Yes, those that you buy off the supermarket shelves are fake stuff. Even in bakery supply stores, all are fake unless it is stated as "Vanilla Extract" and not vanilla essence. Vanilla Essence is fake, tiruan, imitation, not real.

Why did I still buy that huge bottle of Nielsen Massey thingy even though I knew long ago that vanilla extract can be homemade? I thought Nielsen Massey will smell super fantabulous. Well it did smell good (and tasted good)…………… but if you were to compare it with imitation vanilla… it’s like on a 3/10 for intensity. Quite faint actually, if you ask me. So, if the so called best vanilla extract smells only like that, oh what the heck, just make my own and give that a 2 for a much lower cost than the 3. LOL. 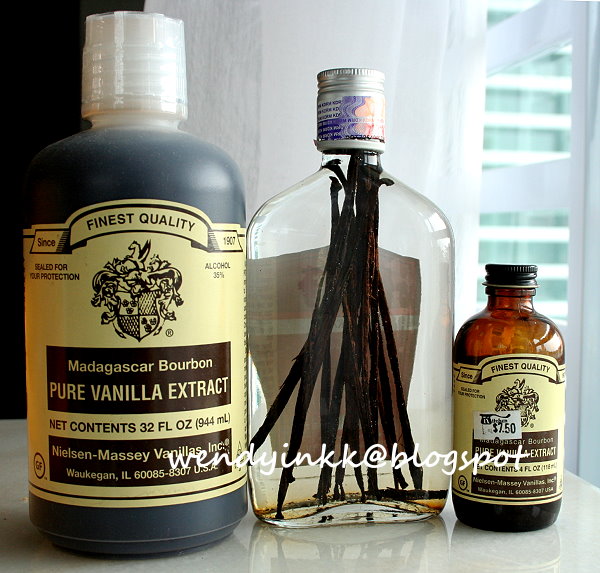 I bought this bottle of vodka for RM10.90(about this). Cheap? Haha, very. I won’t want to buy a 1L bottle of branded vodka at duty free and keep it for ages and ages. Call me cheapskate, I am. I truly am.

So, why did I choose to use a cheap vodka and not branded stuff like Smirnoff or Absolute Vodka? The problem is, liquor is very very expensive here. If I were to make it with vodka from these brands, it’s actually even more expensive than buying a bottle of Neilsen Massey all the way from US.(I have people to bring it back for me) Yes, homemade will cost more than the best brand. One litre of liquor plus vanilla beans will cost me double of bringing back that bottle. That much you see. If the intention is to lower the cost, why not just use a cheap vodka. Anyway, it’s the alchohol level that one is looking for, as long as it’s 40% you’re good to go. 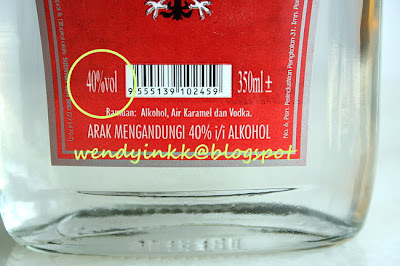 It’s pretty easy, just throw in 3 vanilla pods per cup of vodka, but since my vanilla pods weren’t of top notch quality (I bought them from Bake with Yen, I did buy some much better ones online much later on), I threw in 6 pods, all snipped into half into 330ml of vodka. Let them sit in a dark cool area for many many months and you have your home made vanilla extract. No need to buy that Nielsen Massey. 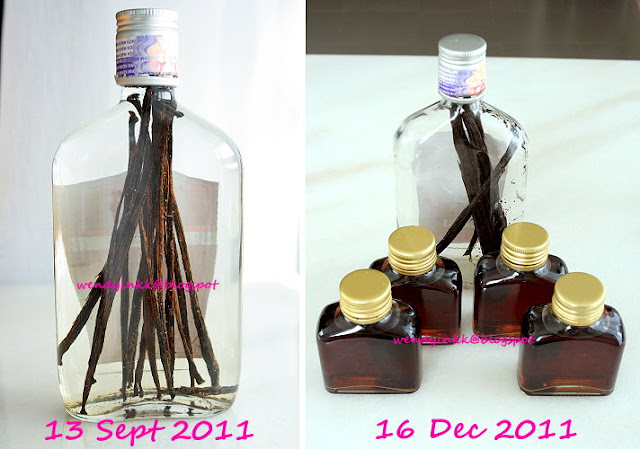 250ml 40% level Vodka
3 quality vanilla beans (use more if beans are inferior)
(I bought a 330ml bottle vodka , so I made the extract right in the bottle itself using 6 pods)

Split vanilla beans lengthwise and put into vodka. Place bottle in a cool dark place (cabinets, not the fridge) until the infusion turns dark like strong black tea. It will take 2-3 months. Shake it from time to time. 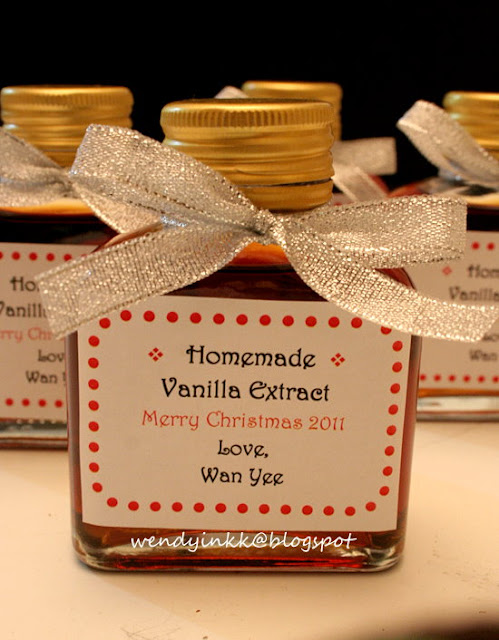 All dressed up for the occasion, Christmas!

I'll be taking a break from blogging because I will be very very busy these 2 weeks with a few birthday cakes to bake for my loved ones. So, postings and new recipes will resume in 2012. And there will be something new on my blog, Random Sunday, blogging about anything not within weekly themes.

Merry Christmas and see you in 2012 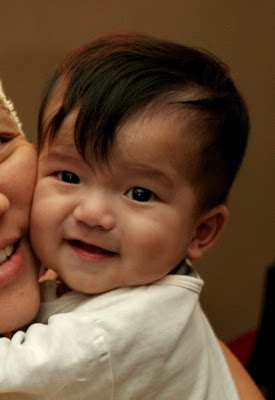 Since Elin asked where to buy Vanilla Extracts, here are some links. I bought mine from Amazon too.
Click on the pictures and you will be brought to the relevant product.
Check out the right panel "More Buying Choices" to see prices from other sellers in Amazon.


A smaller bottle at 4 oz

Another resource for savings on kitchen supplies are these buy.com coupons.
Posted by WendyinKK at 10:25 AM