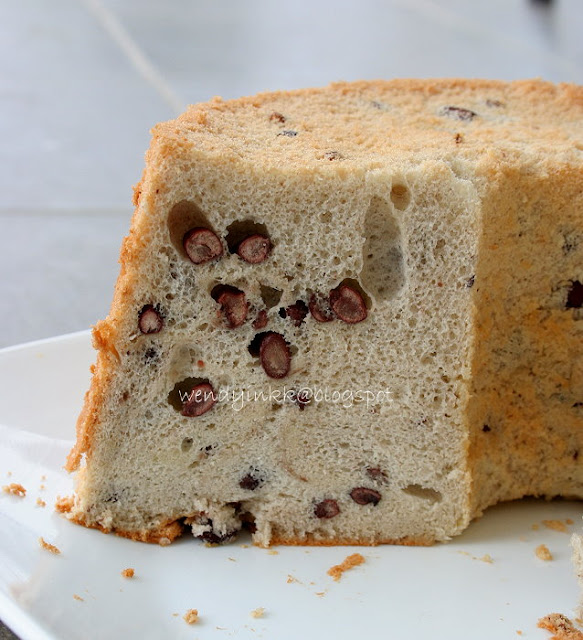 Just made this cake last week, so it's a 'fresh' post. LOL. FYI, I'm still posting a lot of back logs due to the theme thingy. If it's a cake week, I didn't bake all the cakes that week, they were collected over time. So, LOL, please be informed I didn't eat pancakes for one week nor cook noodles 3 times a week.


Lately Lyanne has been on a picking streak. She was as picky as Lydia was when Lydia was 2 and a half. I guess it must be a phase in their lives, since Lydia is no longer picky with her food but almost eating everything, including raw fish roe.

During their pickiness, if there is one thing they are willing to eat, we will not stop them from eating. But this cake.. gosh! Lyanne ate 2 pieces in a row (I cut the cake into 12) and wanted to take a 3rd. It's too much. 2 is fine but not 3. Instead Lydia didn't like this cake. She returned her piece to daddy and said it's not nice. Even her daddy told me not to be that adventurous and just stick to red bean soup. LOL.

I have to say, I'm not a red bean bakes lover. I love my red bean soup, but I don't eat red bean bread or pau with red beans filling. I try to avoid. Even this cake, at first slice, the beans made the cake heavy (where they were located) and not a very pleasant experience. The cake is still cottonny soft, but I don't like the contrast of heavy beans with the soft cake. But as I ate on, I began to love this cake. The beans flavour came through. Funny enough, the beans sort of hardened after being baked in the cake. The beans were really soft as they were fished out when the soup was ready, not any earlier. It was almost mushy when eaten in the soup, but when baked, it held it shape well, even when the cake is sliced and actually tasted very firm. 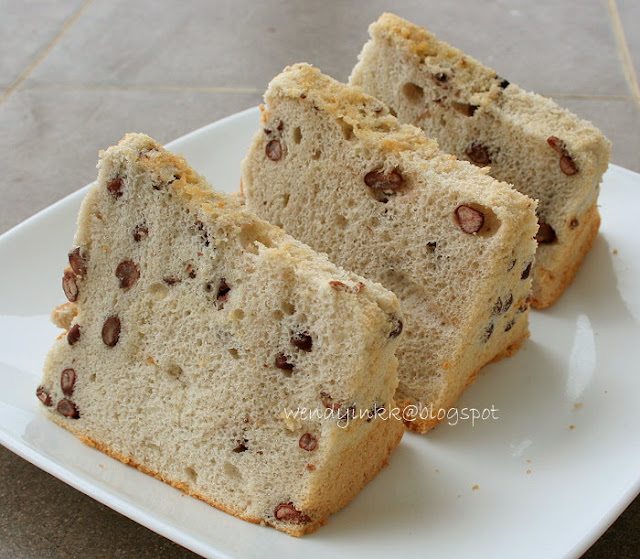 So, why did I make this cake?  I was boiling red bean soup and I seemed to have put in too much beans. Plus I had fresh coconut milk leftover from another dessert. Malaysians love our red bean soup with coconut milk, just like ice cream potong. So, I made up this cake just to see how it'll turn out. There are some regrets though. I used too much eggs and the pan couldn't accomodate after baking. Before baking it was fine. it just filled 70% of my pan.But after baked, the cake rose so high and because there wasn't enough sides to cling to, the top part of the cake somehow shrunk (to be leveled with the pan's rim) and created a slightly dense top. It wasn't too dense, but visually it just don't look nice. The texture was wonderful, soft and fluffy and contrasted with the firm beans. And it's sturdy enough to hold the beans up. I suggest you bake this in a pan larger than 25cm or shrink it to a 4 egg cake, with the rest of the ingredients reduced accordingly to the ratio. 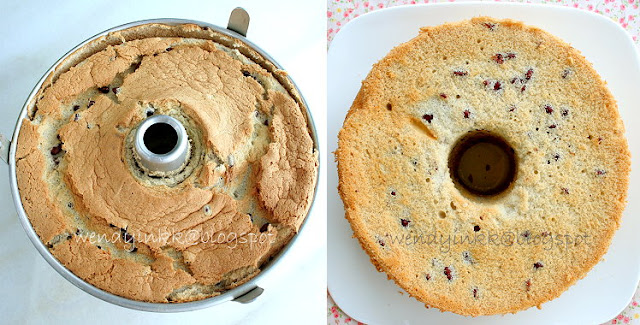 I never bother about cracks on my chiffons. The cake is served inverted. Who sees how the surface looks like? Even  Rose Levy Beranbaum's chiffon cakes crack. If a great cookbook author's cake crack as shown in the cookbook itself, LOL, it's pretty much the norm then. So, please don't get your head cracking if your chiffon cakes crack. I never do.

1. Preheat oven to 150(fan)/170C. Prepare a 25cm tube pan (if you have bigger, it'll be better, this batter's a bit too much for a 25cm, but it still can manage), clean and ungreased.
2. Prepare yolk batter. Mix egg yolks with the oil and sugar. Then add in coconut milk. Sift flour and baking powder together and add into the yolk mixture. Mix to form a smooth paste. Put half the red beans in and gently mix around, do not break the beans.
3. Prepare meringue. Beat egg whites with salt until soft peaks, gradually add in sugar and beat until stiff.
4. Pour 1/3 of egg whites into the yolk batter and fold. Put in balance of red beans (no need to mix). Pour yolk batter back into the balance of whites and fold. 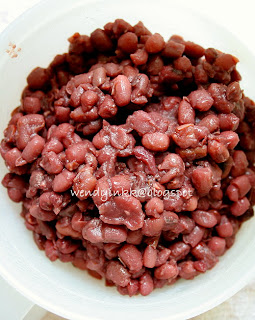 5. Pour batter into prepared tube pan and gently shake it left and right to level batter.
6. Bake for 55 minutes or until done. (4 egg recipe will only need 45-50 mins)
7. Invert immediately upon removal from oven. And let it cool down totally this way. Remove from pan and slice.
To prepare red beans.
When I boiled red bean soup, I boiled extra beans and sweetened the whole pot of soup just the way that I will like it. You have the let the soup boil with sugar in it for half an hour to ensure the beans are thoroughly sweetened inside. Let the soup sit for an hour. The beans will settle to the bottom. Ladle the beans from the base and place them over a strainer. Do no press down beans. Extra liquid will drip and collect beans in strainer after 30 minutes.

*Chill this cake if it's not finished within a day. The moisture from the beans and combined with the coconut milk will make the cake not keep for long. 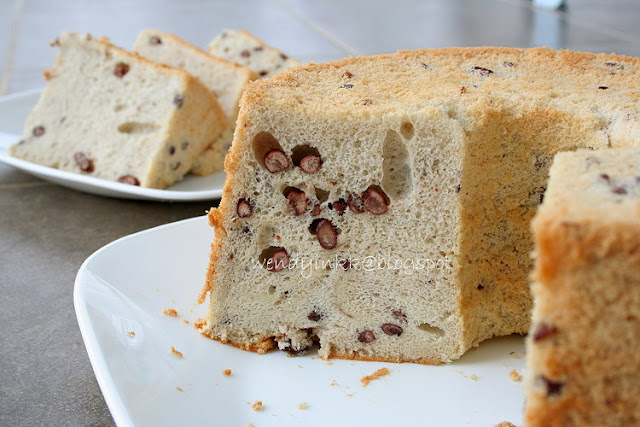