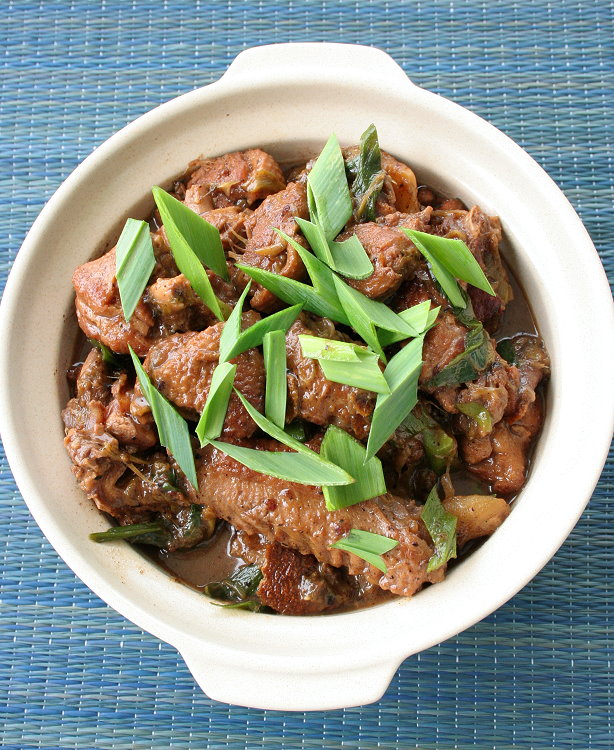 Puppy Duck isn’t cooked with dog meat. Relieved?
It’s duck cooked like how one will cook dog meat.
Why cook duck like one would cook dog? Frankly, they do taste similar
So that when one craves for dog meat, just cook duck to ease the craving.
You may want to ask, “Wendy, how do you know they taste similar?”
Don’t ask. You don’t want to know.

My paternal lineage are Panyu Cantonese 广府番禺. FYI, being Cantonese, there are sub dialects (is this how it's called?), like Sei Wooi, Sun Ning, Sei Yap (I was told by 2 Sei Yap freinds that Hong Kong comedian Mak Ka talks with Sei Yap accent, with the famous , “see doi bau” 死仔包), Toong Koon and lots more that I do not know of. I only know one Panyu word, which is “Sak”, which means eat. Eat in Cantonese is “Sik 吃”. It’s sad that I only know Cantonese but not the Panyu accent. My grandparents never taught my father. Only my uncle (ah Bak) knows it.

As my last paternal grandparent passed away when I was 1, Grandaunt was the only ‘grand’ that I have. She stayed with us ever since her daughter got married and taking care of the household on behalf of my working grandma. Everybody was very close to her. She was the one who cared for me when I was a baby when my mom is away at work. She was already 75 that time. Grandaunt always tells me stories about her life in Panyu. About how she learnt smoking (yes no joke), how she went to the rice fields to catch worms 禾虫 for dinner with a simple oil lamp (If I could get hold of these worms, I will recreate what grandaunt told me. She melted the worms with salt and steamed them. They turn custard like and taste much better than steamed eggs. This is the only true Panyu fare that I got direct teaching from Grandaunt) and how her father will catch shrimp and make them into dried shrimp and “sek doh dui kin 吃到对见(no idea how the last word is written, but it sounds like this in Cantonese. The phrase means, eat until the next year’s season, eg:this year’s spring to next year’s spring) 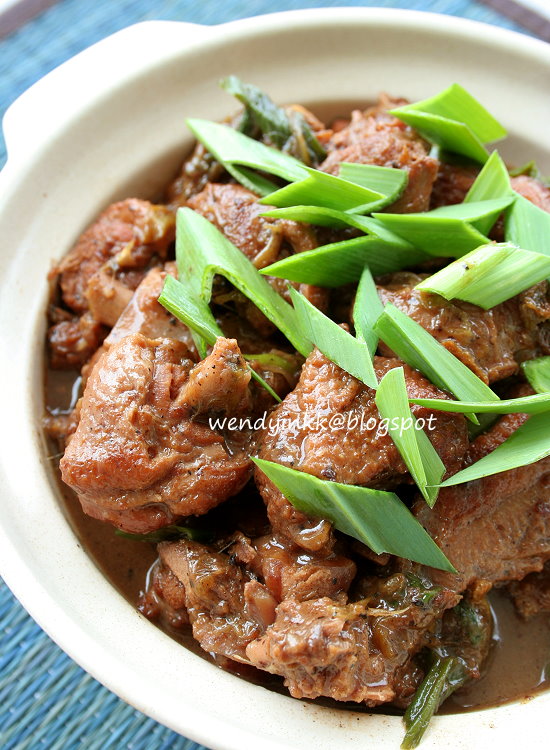 My mom would always tell me how grandaunt will cook puppy duck and it was so so delicious. What’s that? I have no idea. Grandaunt never cooked that when I came to my senses. She had resorted to simple dishes when I was around. I have never tasted a lot of her dishes, especially those that are real traditional fare. I have heard stories about her 6 inch “jeen dooi”, her braised stuffed whole chicken and a lot more of others that I have never eaten nor seen. Her cooking is true Cantonese fare.
Puppy duck or 狗仔鸭 is a traditional Cantonese dish that is almost forgotten. It took me years to finally get a recipe. There were other versions on the net, some coming from Foshan, some from other districts in Guangzhou. But they all don’t sound like what I was told it should be like. I finally found it in Panyu district government website. This one sounds like what my mom described and the recipe should be an authentic Panyu version since it came from a restaurant in Panyu.

And my mom came to stay with me for a week, right after Edith announced her Heritage Trail event. Perfect! I could try recreating this almost extinct dish of my family and with my mom to test, she could tell me how close I am to the original version of grandaunt’s. 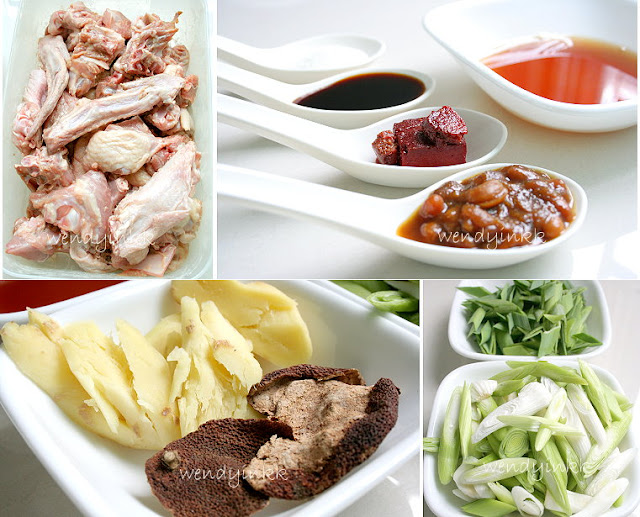 Items shown in real amount used. Just in case you don't have a scale you can visually estimate
My duck was 2.1kg when I bought it. That was the dressed weight. When I trimmed off everything that I don’t want, like the neck, head, butt, webbed feet, and super fatty bits, I was left with 1.25kg. more than 1/3 gone!

My adaptation (calculated based on the source's recipe)
1 duck (2.1kg when bought dressed, 1.25kg after trimming)
15ml light soy sauce (almost 1 soup spoon, my own addition)
1 heaped Tbsp cornstarch
250gm leeks (5 stalks of Chinese leeks), cut into slanting pieces, white and green parts separated
65gm ginger, peeled and smashed
13gm red fermented beancurd (Nam Yue)
25gm bean paste (whole beans paste, I doubled the ratio, because I found it to be too little. Maybe restaurants use another grade of bean paste as I saw on TV, some could be really thick and concentrated)
5gm sugar
15ml light soy sauce
25gm Shao Xing wine (about 2 soup spoon)
5gm tangerine peel (bought from Chinese herbalist. I was told by the herbalist to stick to the amount stated, as overdosing can cause the dish to be bitter, so better not estimate)

Method
1. Chop duck into smallish pieces and let the blood juices drip dry. Marinate with 15ml light soy sauce and cornstarch for 1 hour.
2. In a hot wok, put in 2 Tbsp of cooking oil.
3. Put in marinated duck and cook until fragrant, browned and all the meat has turned opaque. Turn off the heat. Push meat to the side, let the oil drip down and dish up.
4. With the same wok, with the remaining oil, fry ginger and white parts of leek until fragrant.
5. Put in fermented beancurd and bean paste and fry until fragrant.
6. Return duck to wok, toss to mix everything around.
7. Let the duck heat up again and put wine in. Cook until wine dries up.
8. Put in water , enough to cover duck. Put in 15ml light soy sauce, sugar and tangerine peel.
9. When water has come to a boil, cover with lid and simmer on medium heat for 1 hour, checking water level every now and then, adding more as needed.

10. Add in green parts of leek and simmer for 5 minutes. If you want the gravy to be thicker, add in some cornstarch mixed with water (I didn’t, as I reduced the gravy a lot and the melted leeks thickened whatever liquid that was left).
11. Dish up and serve. (I find it salty enough, therefore didn’t add in any salt) 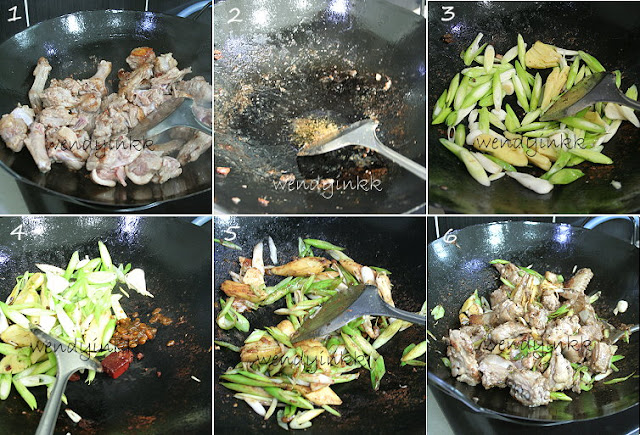 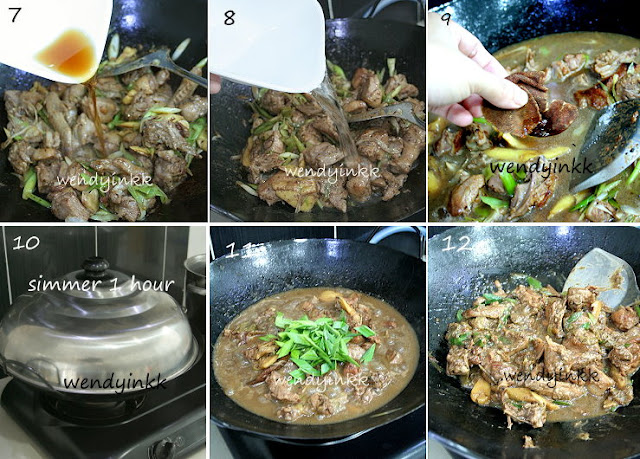 Verdict: Was it like Grandaunt’s version? Mom couldn’t remember even though she ate it before, but she said, it tasted good. Anyway, I’m just glad to do a “Panyunese” dish that I only heard of before, but now, I’ve tasted it. 4 adults polished off this duck. Not a bit of leftovers! But will I cook this again? I'm not sure because cleaning the duck was a chore. The dressed duck still had lots of feather stubs everywhere, had to tweeze them out. Took me one hour to tweeze and clean. If you want to know, I bought my frozen dressed duck at RM17/bird at the wet market.

I am submitting this to Edith's Heritage Trail Event.
Do join in the fun.
Anyone from any ethnicity is welcomed

Email ThisBlogThis!Share to TwitterShare to FacebookShare to Pinterest
Labels: Duck, From family n friends, From the net, Traditional Chinese