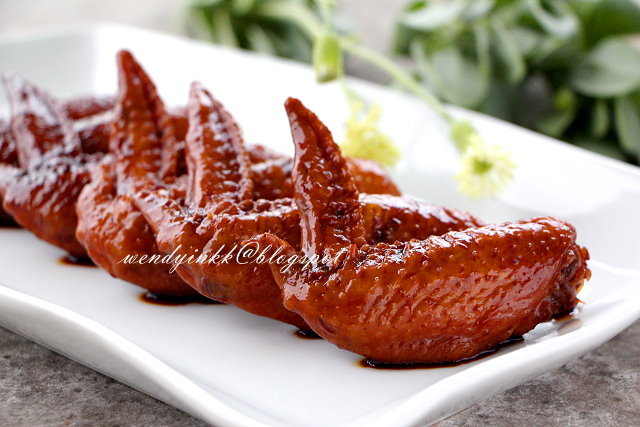 Like the previous chicken dish, this is another one commonly mentioned in my Hong Kong culture guru, TVB.

I did wonder did these originate from Switzerland? I found the answer and nope, they did not.
In fact they were first called this way, when a waiter could  pronounce the word 'Sweet' properly. And the customer  liked it so much and came back again asking  for sweet wings by calling them as Swiss Wings, as that's what he thought the name was. And the urban legend lives on. It is said that the best is found at Tai Ping Koon. 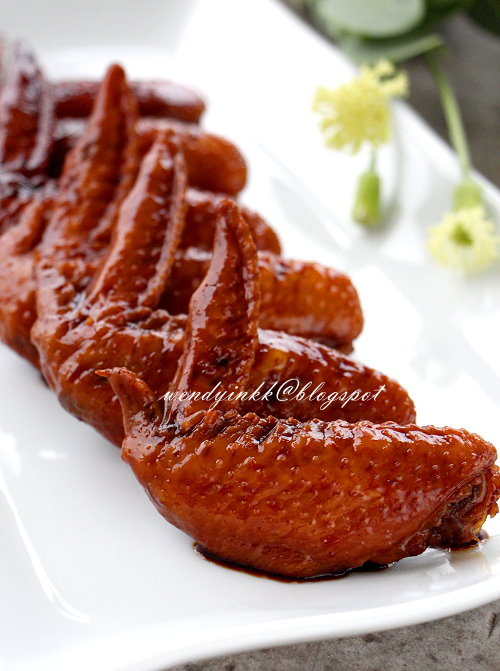 There are many ways to cook this, as it is a homey dish as well. Every mother has their own version. Some uses spices, some don't. Some uses store bought bottled sauces, some use luxurious ingredients to form the stock base. The basic rule for this dish is just sweet sticky soy sauce wings. It has to be sweet.

Previously I tried cooking this with another method from another source, the results weren't as good as I hoped. The next time I tried Ah So's method of blanching and dunking into cold water. The texture was indeed so much better, the skin is yumz. The poaching liquid is slightly modified as I prefer the the onion and ginger to be in the liquid. You can play around with some  bay leaf or even star anise and pepper....  as you like, as long as they have the aroma of soy sauce and they taste sweet.

If you are curious whether this dish bears any resemblance to one of my dishes on this blog, Soy Sauce Soaked Chicken,..this dish is less sweet and I didn't  use any spices. 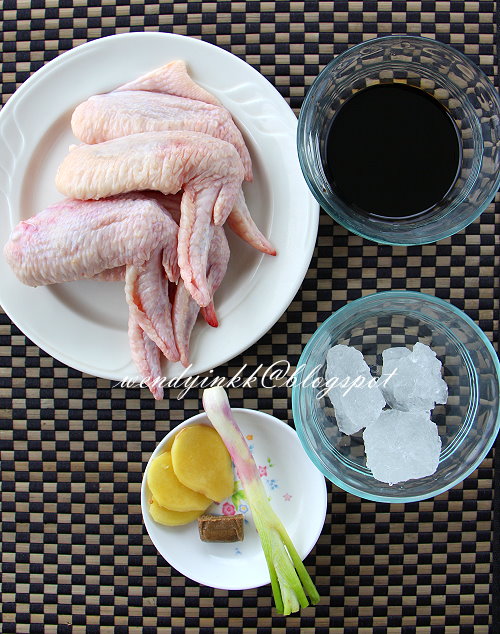 Swiss Wings
Adapted from : Ah So

1. Bring a saucepan of water to boil, around 3-4  cups of water will be enough.
2. When water has come to a  boil. Put in chicken wings, and let them cook for 1 minute or until the skin firms up and the bones  have set its shape..
3. Remove from the water and dunk them into  ice cold water immediately. Let them sit in the cold water for 5 minutes.
4. Combine the poaching  liquid ingredients together in a saucepan and bring to a boil. Lower to a simmer and let it cook until the rock sugar has all melted. Keep the  pot covered as you simmer.
5. Remove ginger and spring  onion from the liquid and put in chicken wings. Let it gently simmer for 15 minutes(lid off). My poaching liquid was enough to cover my chicken. (no high heat used to bring back to boil)
6. Remove the wings from the poaching liquid and serve.

I am submitting this to Asian Food Fest Hong Kong Macau Month,
hosted by Annie of Annielicious Food
Posted by WendyinKK at 11:24 AM

Email ThisBlogThis!Share to TwitterShare to FacebookShare to Pinterest
Labels: AFF, Chicken, chicken-steamedboiled, From the net