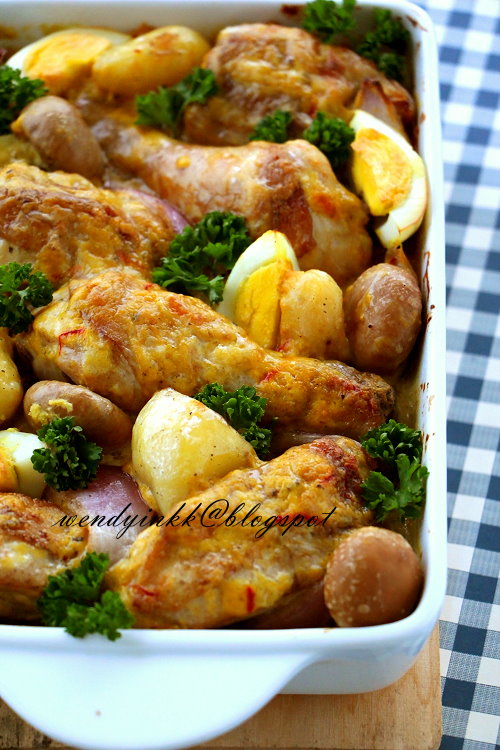 Galinha à portuguesa or Portuguese Style Chicken 葡国鸡 is a Macanese dish that did not originate from Portugal, but given a Portuguese title to enhance its status.

There are many versions on the internet. Some made with turmeric, some with a mixture of turmeric and English curry powder. I did try once with a recipe from Open Rice, of which seemed simple and nice. The taste was good, I have to say, but there's supposed to be a fragrance, of which is missing. 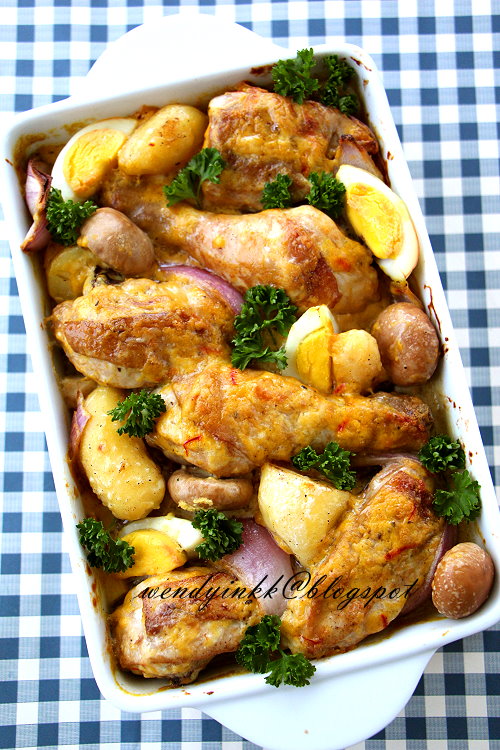 And when I found this old recipe from 1962, the recipe greatly varies from the current versions. When I read through it, I understood where the supposedly fragrance came from. The gravy was made with the roux method, and it would indeed smell different compared to the other current household recipes. And the use of saffron here is truly a surprise. Turmeric, the yellow pigment source in modern recipes do not carry the same fragrance as saffron, and is far more budget friendly. 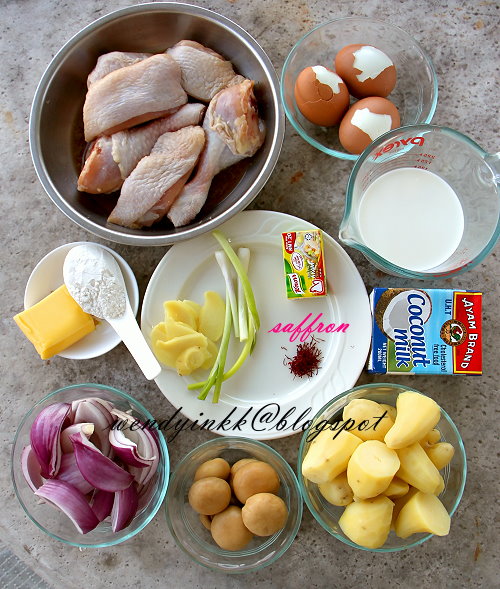 The final result is a better visual resemblance to the versions served in Macau's Portuguese restaurants. I  can't confirm regarding the taste, as I have never been to Macau. But let's just go with the recipe as closely as possible. I rewrote part of the instructions because, I think steeping the saffron before use, will give a better result that what I got this time.

The gravy is very rich.. imagine a roux plus the amount of coconut milk. Not for those watching their waistline. It was quite a waste seeing the expensive saffron infused gravy being left behind, but there are times we have to be kinder to ourselves. Or maybe I should 've kept it  and use it to cook a pot of saffron rice. Well, the recycled saffron rice idea came too late for  me. 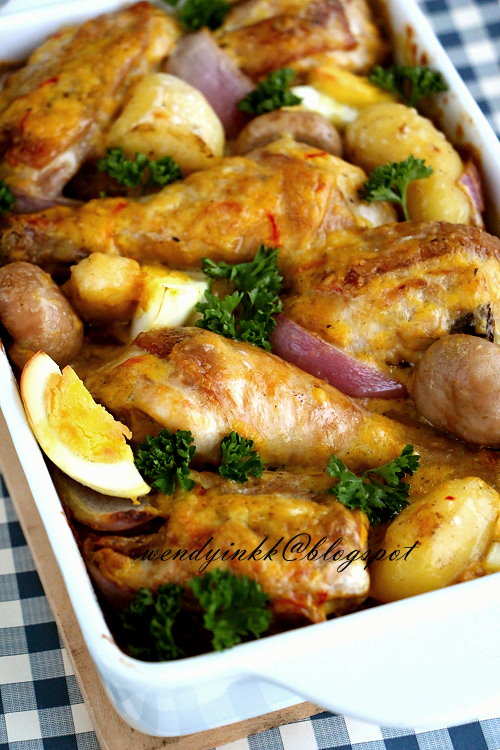 1. Marinate the chicken with wine, soy sauce and salt for 1 hour at least, or overnight.
2. Pour with boiling water over saffron and infuse for 30 minutes.
3. Heat wok/pan and put in 3 Tbsp of oil. Put in ginger and spring onion and fry until very golden. Remove from the oil.
4. Turn heat to high and put in chicken pieces and brown the chicken's surface. Drain and set aside.
5. Put in onion wedges and give them a quick browning. Remove and set aside.
6. Add more oil if it's needed. Put in parboiled potatoes and lightly brown the surface.
7. Preheat oven at 200C.
8. With a clean pan, heat it on medium low, then put in 2/3 of the butter and cook until there are no more bubbles. Put in the flour and cook until you can smell the fragrance. (To be safe, I usually do this.) Turn off the heat now. Put in the  milk, and stir until no lumps are seen. Turn the heat back on.
9. Add in saffron infusion, chicken bouillon, HALF the coconut  milk and bring back to a boil. Put in the chicken, onions and potato chunks and simmer for 5 minutes or until the gray has thickened like cream soup. (add more water if it's needed)Taste and season with salt and pepper.
10. Place all the vegetables onto a baking  dish and top with the chicken pieces. Slot in the egg (where ever you like). Drizzle the remaining coconut milk over and dice the remaining butter and place on top of the chicken.
11. Bake for 15-20 minutes on the upper middle rack or until you see the top turning golden brown


I am submitting this to Asian Food Fest Hong Kong Macau Month,
hosted by Annie of Annielicious Food
Posted by WendyinKK at 11:00 AM