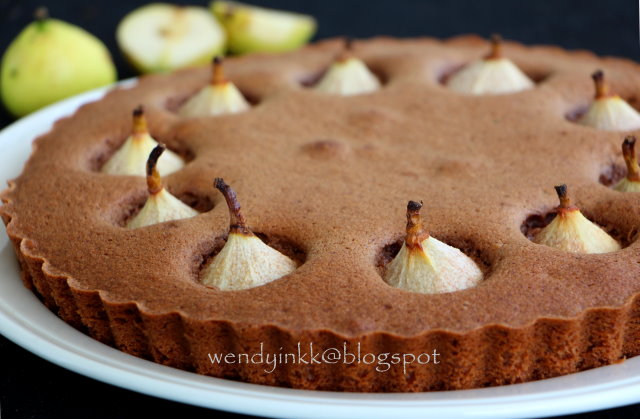 Paradise Pear is a type of pear that is small in size. So small I can pop the whole thing into my mouth in a go. The ones we get here are imported from Australia and are usually available from January to March, depending on your luck. These paradise pears aren't cheap and they cost almost RM1 each, and are sold by weight. I got my pears from Aeon and once, from the local night market.

It's because of the timing... that I tend to keep these pears until they almost rot. I am just too busy around Chinese New Year.

I made this cake 3 times and I finally got this posted. 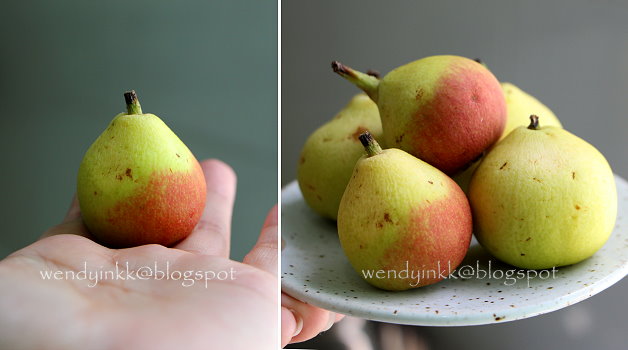 This cake,  that I want to describe as ‘the cake that my MIL can’t stop nibbling at’, was created way in back 2012. I needed to clear some ingredients, like a huge pack of pecans, some half used streusel and the almost rotting paradise pear was one of them. I just put everything together, did a lick test and baked it in the oven.

I split the cake and gave half to my husband to bring to his mother and I brought the other half to my mom. 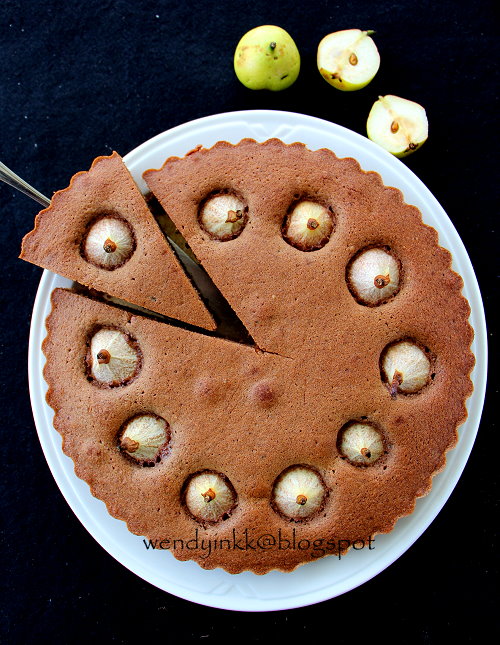 So off to my mother's house I went.

Told my mom, I made something new for her to taste.The moment she saw the cake, to my horror the kid in her came out. She pulled out one pear and ate it. With my eyes stretched as wide as they can go, I looked at her and said, “Mom, you’re like Lydia picking out raisins from my bakes!”. She laughed hard and called my niece to come. Then my mom pulled another pear out for my niece and laughed again. LOL, can you imagine that?

My Mom said, the pears were very nice. Ok, so that made me breathe. *Calm down calm down*

Now the cake had 2 big holes that was once filled with pears! *Faint*.
She left the other 2 for my brother and SIL.
I forgot to taste the cake. 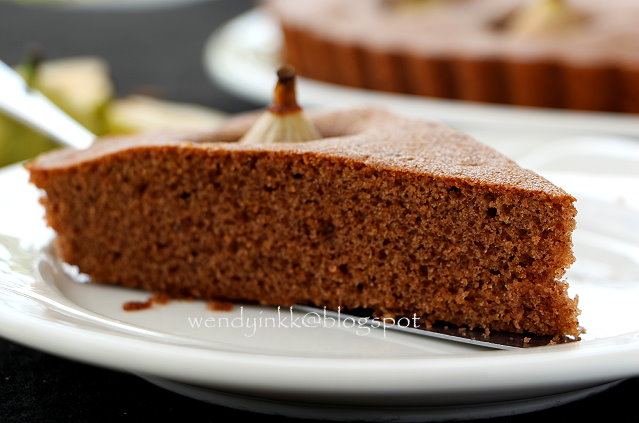 I left my mother's house and went home, with hopes of tasting the cake, since I left half the cake with my in laws.

To my disappointment, none was left! I heard from my husband, when MIL took the first bite, she felt it tasted weird (she isn't a fan of cinnamon), but as she ate on, it became addictive! And my husband was only left with one very very small piece, and he said it was nice(I think he didn’t taste the cinnamon in it, he hates it!). Half a 9 inch cake was chomped up in a matter of 3 hours by 2 adults with a little bit left for my husband to nibble on.

None for me! It's hard to imagine, I created a new recipe, and have no idea of how the cake taste like. 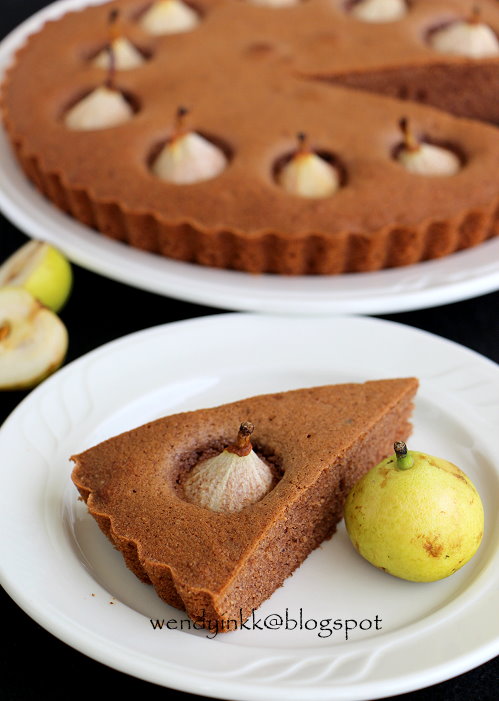 The next year, in 2013, I bought some paradise pears from the night market, and made it again  Because the first time I made this, I didn't get to taste it at all. Everybody enjoyed it but me. It's really getting on my nerves as I didn't know the exact the taste but only reviews of those who ate the first cake. Urrgggh!

This time, I ate half the cake …. over a few days.
Deeply satisfied.

I used only 6 pears as most of them got rotten as I delayed my plans due to the Lunar New Year. Rotten again! What a waste. 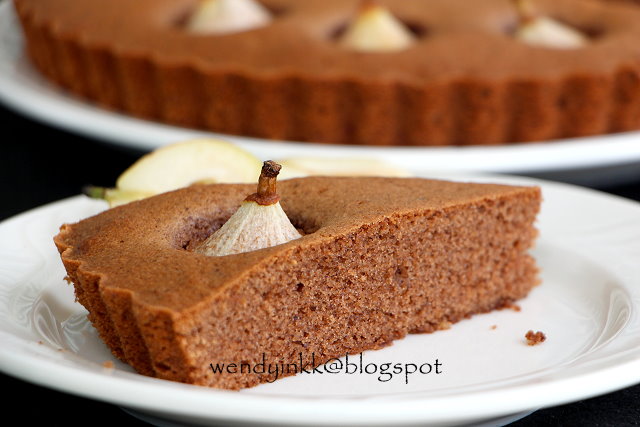 2 years after the last attempt, I saw paradise pears again at Aeon.
I ran out of brown sugar and so I substituted with half muscovado + half white sugar. The cake looked rather dark compared to the other attempts.

My colleagues had their first taste of paradise pears and loved the fragrance of the pear and the texture of the cake made of pecans.

My girls shared their cake, Lyanne ate the cake and Lydia took the pears. They do make a good pair.
Lyanne insisted to keep some cake for school, she likes it a lot... I didn't expect that she will like the cake so much.

My husband, didn't like this cake (he's telling the truth this time, I know). Refused a second bite. So, I can't tell if you will like this cake. The fragrance of the pear is quite unique when infused in the cake.

It's been such a long time since I wrote long stories... lol. Not every thing I make has a story or in this case... a long story. LOL. I know, I'm long winded. Selectively.

1. Mill pecans together with flour and baking powder. Mix in cocoa powder and cinnamon powder. Set aside.
2. Grease an 9 inch shallow pan (preferably a tart tin with removable base), and line the base with non stick baking paper.
3. Beat butter and sugar until fluffy. Beat in eggs, one by one, beating well after each addition. Beat in vanilla extract.
4. On low speed, beat in pecan flour mixture in 3 additions and beat until combined.
5. Pour the batter into the prepared pan and level. Now preheat the oven againat 160(fan)/180C
6. Peel paradise pears. Stick the pears into the batter, neatly.
7. Bake for 35 minutes or until done.

To toast pecans:
Preheat oven at 150C(fan). Toast the nuts for 4 minutes or until lightly fragrant.