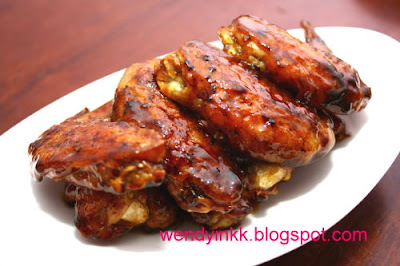 When I was in Form 4 or 5, after MYF each Friday, my friends and I always frequent this eatery called Little House in Tapah, which is 20 minutes drive away from Kampar. They serve these Honey Chicken Wings of which I believe were not barbequed, but fried and tossed in honey gravy.. so, here’s a recreation of what reminds me of my Friday nights.

1. Cut wings to separate the middle wing and the drummets.
2. Marinate with salt and pepper for at least half an hour.
3. Fry chicken wings in oil until slightly golden, no need to be too dry.
4. Pour away oil and leave behind 1 tbsp of oil.
5. Put in honey and soy sauce and cook on low heat until it turns syrupy.
6. Put back in the fried wings and toss with medium heat until gravy coats wings well and turns carameled 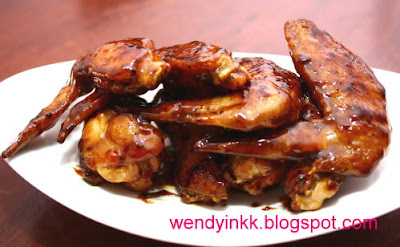 Posted by WendyinKK at 2:08 AM