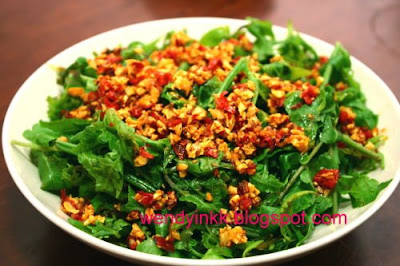 So, it’s an Asian wild vege… Wonder if people from other parts of the world eat them as well…

This method is copycat of Taiwan’s Celebrity Chef Huang’s version which I saw on TV, he used black vinegar… and me being no black vinegar fan, except in the case of pig trotters…. replaced it with lime or calamansi juice.

Ever wonder why the Choy Sum on your bowl of wantan noodles looks so green??? Ever wonder why the Kangkung that comes with your Sotong looks so vividly green?? Wantan skins and noodles contain lye water, and the sotong kembang is alkaline.. So, when the water that is used to cook them is being used to cook vege, the vege remains green…
Fern shoots tend to brown (and I mean ‘uglily’ brown) very quickly after being blanched.. maybe water in Malaysia is rather soft and more on the acidic side. To counter this, just add 1 drop of lye water into the boiling water.. or just put in 1 pc of wantan skin… And u’ll be blessed with green ferns…

When I was staying in Pahang during my early teaching stint, me and my housemate will go to the small market daily to buy our ingredients for that night's dinner, and once I bought 4 bunches of fern shoots and my neighbour who happened to be there asked , "Buat apa beli banyak macam tu?" (why are u buying so much?), his eyes looked shocked. LOL, he didn't know he happened to live infront of 2 cows.

1. Finely chop garlic, shallot and chillies.
2. Boil water and put in lye water (kan sui)
3. Blanch fern shoots for half a minute.
4. Drain well.
5. Heat wok and put in oil.
6. Saute garlic and shallot until almost golden, put in chillies.
7. Put in salt and sauté until golden. Dish up onto a separate bowl.
8. When ready to serve, place fern shoots onto a plate, drizzle lime juice and pour fragrant topping over fern shoots. Toss well.
Posted by WendyinKK at 8:24 PM