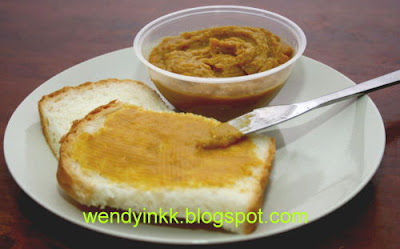 This is supposed to be pumpkin kaya. But Mike insisted it be called pumpkin jam. To him, kaya must have eggs, and when it’s eggless, it’s jam.

It smelt great when it was ready, the whole house smelt of kaya! But the aroma was somehow lost after being chilled in the fridge.
B4 it was chilled, it smelt coconutty, after chilled, pumpkiny. Still it was ok.
A bit more healthy than the eggy kaya.

Recipes online says just cook in a pan over flame, but with my experience in kaya making (I come from a family that’s been making kaya commercially for more half a century), short cooking time makes it more perishable. (I’ve bought homemade kaya that turned bad after a week even when it was in the fridge!! That’s pan cooked, guaranteed!) Kaya is supposed to be double boiled over a long period of time, so that the sugar will not crystallize and the coconut milk in it won’t spoil for days. The kaya my mom used to make can be kept for more than a week w/o refrigeration and it’s not even kept in sterilized jars. If refrigerated, try keeping it a year!

So, why didn’t I double boil it? Well, the slow cooker is like a double boiler, but keep it on low heat.
High heat during the first hour won’t spoil it, cos it’s really snail slow to heat things up in a slow cooker.

If u don’t have a slow cooker and want to double boil it, do it for 3 hours.
If u plan to finish the jam in a day or 2, by all means, cook it direct over flame. I can’t finish it that fast, so better cook it slowly…

1. Steam pumpkin flesh until soft. Puree with a blender or mash it up.
2. Mix pumpkin flesh with coconut milk, and both sugars.
3. Place mixture into a slow cooker together with pandan knot.
4. Cook on high for an hour, low for 2 hours.


It's almost a month since I made this, and the jam is still in good condition, sitting in my fridge. I purposely posted this late, to see how long the jam can last in the fridge.
Last week, I made buns with this pumpkin jam, and they tasted good!

Update 1 : The jam spoiled at 6 weeks. Well, can't be compared to my mom's original kaya, cos there's so much less sugar. But nonetheless, it didn't spoil within 1 week.. kekeke

Update 2 : My friend gave me feedback that her jam was still good for 7 weeks. 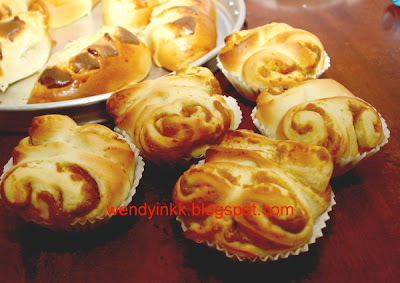 Posted by WendyinKK at 1:47 PM

Email ThisBlogThis!Share to TwitterShare to FacebookShare to Pinterest
Labels: From the net, Jam, Palm Sugar, Pumpkin