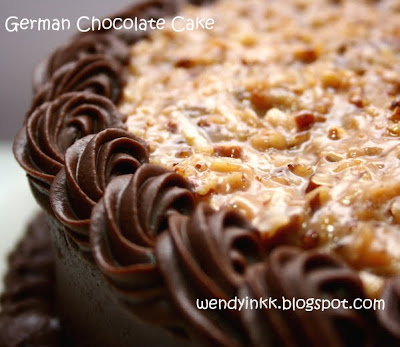 It's Mike's birthday tomorrow, and I made him this cake to cut at midnight today :)

There was once I had few orders of Chocolate Moist Cake and made some goeey chocolate topping on top, and he asked me, why I never make this type of cake for him. Okok...

Few days back, I still haven't decided what cake to do.. Was thinking of a cheesecake. But then while surfing on the net, I saw this cake. German Chocolate Cake. Well, I had this recipe in one of my baking books, but there was no pic, and I didn't know what a German Chocolate Cake looked like. It's important to have pics in cookbooks, and I wonder why this book doesn't have much pics. I don't do recipes that I do no know what it looks like. BTW, I didn't buy it, the recipe book was a Christmas present.

Okok... the looks of it were tempting.... and the bloggers who made this from David Lebovitz gave rave reviews. Hmm..... I'll make this one then :)

Having most of the ingredients at home, I didn't hesitate. Had coconut flakes, called angel flakes here, and I toasted them, hmm.. tasted heavenly. Munched on quite a lot. Taste like Kuih kapit bits :) Actually I toasted 3 batches. The first batch, I toasted half cup, cos I have half cup of "already toasted coconut flakes" bought from bakery supplies shop.

While I was toasting the 2nd batch, I looked at my first batch, the first batch were very toasted, so I hesitated, should I use them or should I not.... Duh!!! Not!!!
Then I toasted a 3rd half cup.... Hahaha! what a lot of toasted coconut. Did I get ur head spinning? 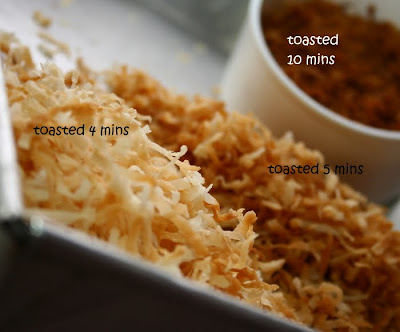 I baked the cake yesterday and filled it today. Made the filling in the morning and the icing too, and left it to cool at room temp. When I came back from lunch, I checked, the filling thickened, and the icing did not thicken at Malaysia's room temperature. Had to put in the fridge. So I filled up the cake and chilled it while waiting for the icing to solidify a bit.
Still, to pipe that is a task... my warm hands melted the icing at the upper part of the piping bag. You can see all those drooping curls by the side of the cake and the patternless drops of icing at the base. 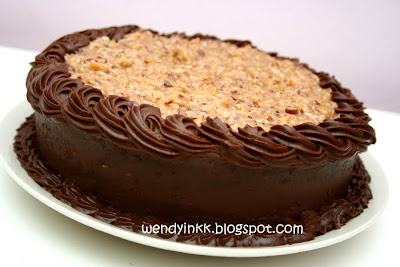 Ok, let's stop talking and look at the recipe.

I've halved the original cake recipe, and made some minor changes (type of chocolate used and changing buttermilk to yogurt), made only 2/3 of the filling, and half the icing. Yet, it is a nice 8 inch cake. Suitable to be served to 8-10 persons.

1. Butter an 8 inch cake pan, then line the bottoms with rounds of parchment or wax paper. Preheat the oven to 350°. /175C
2. Melt chocolate with the 6 tablespoons of water. Use either a double-boiler or a microwave. Stir until smooth, then set aside until room temperature.
3. In the bowl of an electric mixer, or by hand, beat the butter and 120gm of the sugar until light and fluffy, about 5 minutes. Beat in the melted chocolate, then the egg yolks, one at a time.
4. Sift together the flour, baking powder, baking soda, and salt
5. Mix in half of the dry ingredients into the creamed butter mixture, then the yogurt and the vanilla extract, then the rest of the dry ingredients.
6. In a separate metal or glass bowl, beat the egg whites until they hold soft, droopy peaks. Beat in the 30gm of sugar until stiff.
7. Fold about one-third of the egg whites into the cake batter to lighten it, then fold in the remaining egg whites just until there's no trace of egg white visible.
8. Divide the batter into the prepared cake pan, smooth the top, and bake for about 45 minutes (I did 40 mins on 170C), until a toothpick inserted into the center comes out clean.
Cool cake layers completely.While the cakes are baking and cooling, make the filling, syrup, and icing.
:) The cake's surface is flat. No dome in sight... very pretty :)


1. Mix the milk, cream, sugar, and egg yolks in a medium saucepan. Put the butter, salt, toasted coconut, and pecan pieces in a large bowl.
2. Heat the cream mixture and cook, stirring constantly (scraping the bottom as you stir) until the mixture begins to thicken and coats the spoon (an instant-read thermometer will read 170°F.)
3. Pour the hot custard immediately into the pecan-coconut mixture and stir until the butter is melted. Cool completely to room temperature. (It will thicken.)

1. Place the chopped chocolate in a bowl with the corn syrup and butter.
2. Heat the cream until it just begins to boil. Remove from heat and pour over the chocolate. Let stand one minute, then stir until smooth. Let sit until room temperature. Chill it if u're in tropical climate.

To assemble the cake:
Remove the cake layers from the pan and cut cake into 3 layers in horizontally, using a serrated bread knife. (The cake is very soft, almost like an emulsified sponge cake, so fragile when I cut it into layers, so better chill it before u cut.)
Set the first cake layer on a cake plate. Spread ¾ cup of the coconut filling over the cake layer, making sure to reach to the edges. Set another cake layer on top.
Repeat spreading ¾ cup of the coconut filling over each layer, including the top.
Ice the sides with the chocolate icing, then pipe a decorative border of chocolate icing around the top, encircling the coconut topping.

The original recipe called for moisting with syrup, but I usually never do this to any of my cakes :) 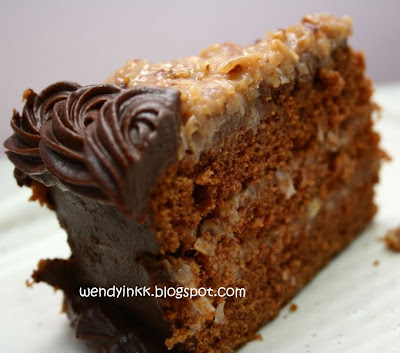 Verdict: Mike loved this cake. He said, this is how cakes should be..... chocolatey :)
I've never expected any cake besides sponge cakes to have such a soft texture. It's really soft and fluffy. When fresh out of the fridge, it's really a bit hard, but leave it at room temperature a while, it'll be alright. The filling is slightly too sweet for us, even when I've reduced some of the sugar. Feel free to put in less. The chocolate icing really makes it really good and very chocolatey. Overall, we love this cake.
The candle blowing session , well, the filial daughter is doing it for her papa... Lydia loves blowing candles :) 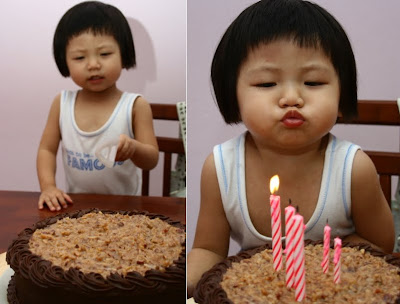 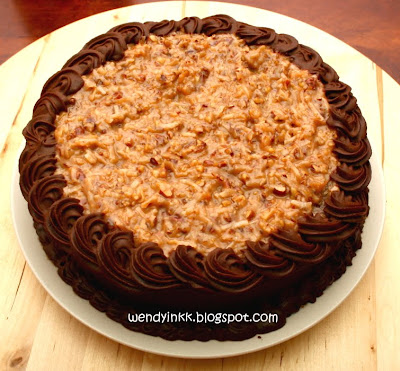 Another shot, a bit too warm (could be from my pink wall).. but it's the best shot from the top, dark coloured cakes are hard to photograph! I'm no good at editing :)
Posted by WendyinKK at 6:11 PM