Last time, when I had Lydia, I didn't know much about breastfeeding, and yet the inexperienced me didn't do much to have more milk. Now don't tell me, the more the baby sucks, the more I'll have. Oh yes, but I do believe that comes to a certain limit for different individuals. I've one relative whose baby has never suckled and yet can pump 6 oz of milk on first attempt, and thereafter 2 bottles each time. The baby never suckled for at least 3 months because the baby was the the incubator. She had so much milk that the milk was all thrown away due to super excess. How I wish I had that much.

When I had Lyanne, I was determined to give her more, and knowing of my past mistakes, I certainly did better. But to me, how I wished I still had more. I then searched on the internet on ways to increase my supply, and one of the methods is to consume fenugreek. 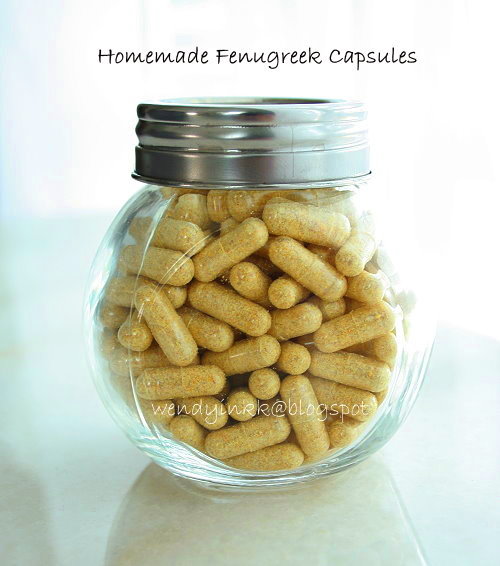 Fenugreek is a cheap and common spice. Used in making curries and Asian dishes like nasi dagang. My MIL told me, her sister uses this and make an infusion with hot water as a cough remedy. So, it's something pretty common, nothing to be scared of.  I got to know that to buy this ready made in capsule form from supplement shops, it's pretty pricey, compared to the cost price.

Few weeks before I was due, I bought 100gm of fenugreek seeds, for only RM1.60 and 300 gelatin capsule shells for RM5.40. I made 270 capsules for less than RM7. Cheap? Yes.
So, was it effective? I'll be glad to say, it worked for me the last time. I was from barely enough to slightly more than enough after comsuming for a few days. I read it gives about 20% increment, and so that's about 20% for me, quite true.
I won't be consuming all 270 capsules. The amount is shared between 2 sister in laws and me. Just take until you achieve your desired milk flow. Won't need to take this forever. 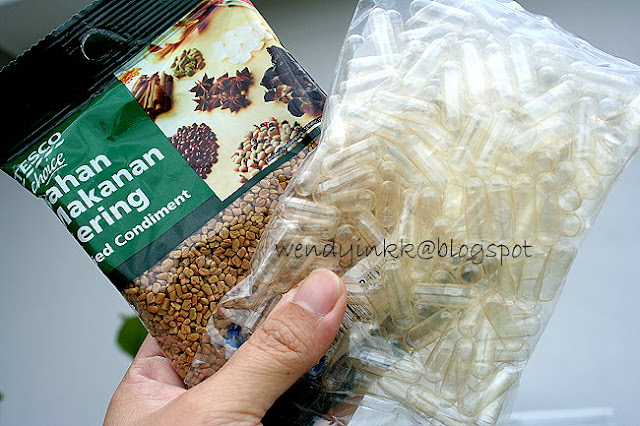 Mike's friend took Domperidone, a prescribed drug all through her breastfeeding, something of which both of us detest to. It's actually used to treat vomiting and nausea and having more milk will be the side effect of that drug. Mike would rather buy formula than for me to use Domperidone. It just feels weird to consume the drug for its side effects throughout breastfeeding. No stopping!

How many fenugreek capsules should one take? Some sites I read says 3 capsules 3 times a day, meaning 9 capsules/day. I was worried it might be too much, so I just take 3/day. It was sufficient for me. . I read that as long as your body starts to smell like maple syrup, then it's enough. Yeah, 2 days into taking and I became a walking pancake around the house, LOL. This time I took 3 capsules each time, twice a day and I still don't smell like maple syrup, so you have to make your own adjustments.

So, for those of you who are interested to make your own or as a gift for someone, here's how I did it.

1. Take some fenugreek, spread it out on your palm, checking for bits of sand or impurities. 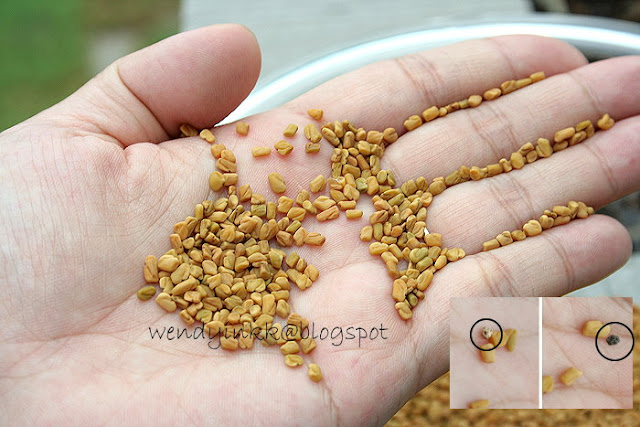 2. Grind it in your mill (the short thing that comes with your blender). At this point I wished I had a Blendtec. The machine that can be used to blend Iphone, LOL. 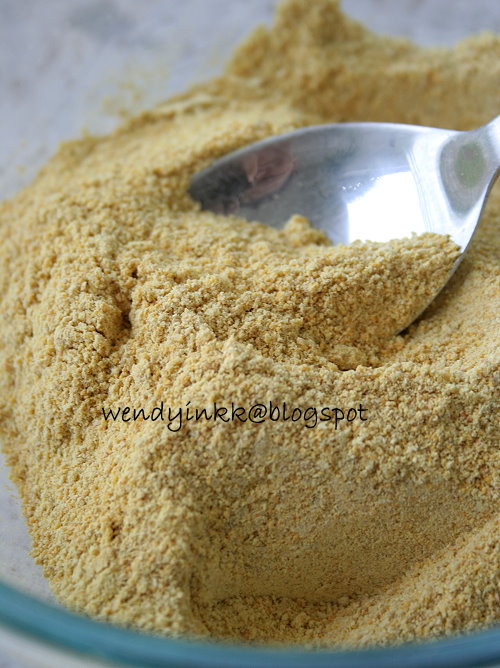 3. Use a not too fine sieve and sift it. Repeat milling process with those that are too coarse. Actually there's nothing wrong with comsuming coarsely milled fenugreek, but isn't it easier to digest if it's finer. 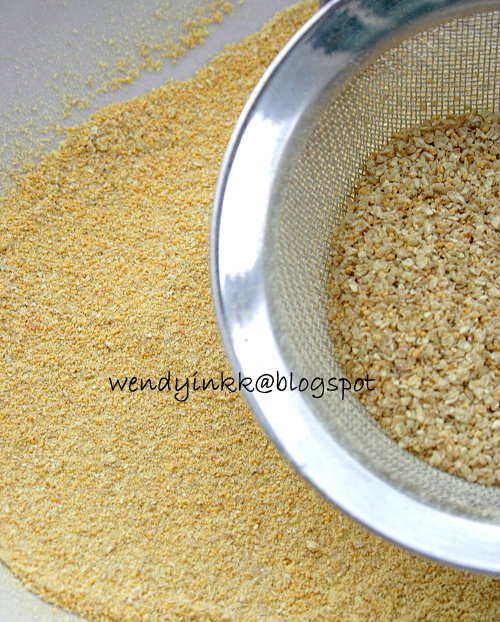 4. Fill into capsules and keep them in a glass jar. Do not fill them into containers that can absorb smells like Tupperware. The smell stays forever, even after 3 years. Yes, the Tupperware I kept the milled fenugreek during Lyanne's time still smell like fenugreek until today. 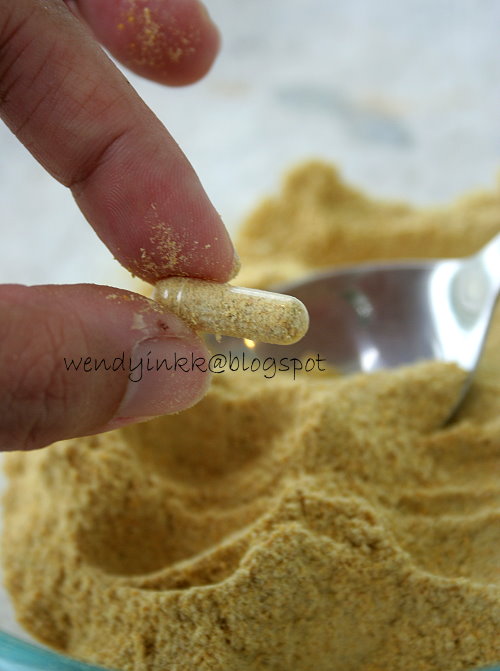 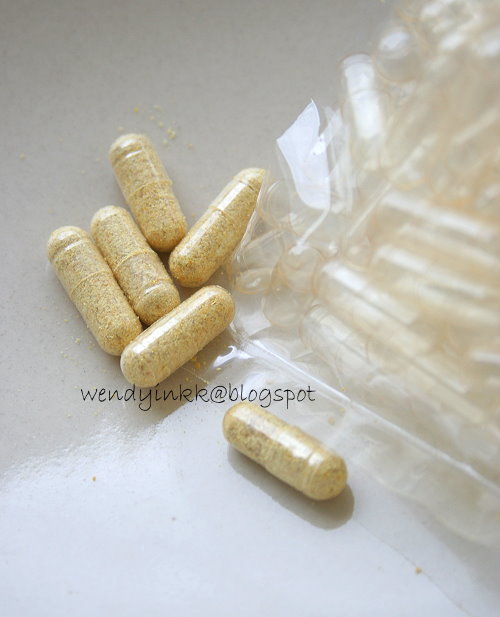 Notes:
Use the fenugreek raw. As heating will change its compounds to Niacin, a type of Vitamin B. It can be very heaty to consume too much Vitamin B. Read here.
When I consumed this during Lyanne's time, I roasted it at 150C for 10 minutes in a preheated oven before grinding. It was more effective with only 3 pills and I absolutely smell of fenugreek in the armpits and urine. Milk flow was obviously better BUT, it was very very heaty. I had to stop after consuming for 2 weeks, as I was having a very dry throat. The throat took 3 weeks to moisten up again.
This time, I consumed 3 in the morning, and 3 more at night, and I do not smell that strong of fenugreek. Milk flow is not as great as consumed roasted, but I can consume it for longer periods of time without being "overheated" by the Vitamin B in the roasted fenugreek.
I'll update more later. I plan to do another batch roasted again, at a lower temperature, to see it effects. Please stay tuned.
Do not consume fenugreek during pregnancy as it can cause early contractions. 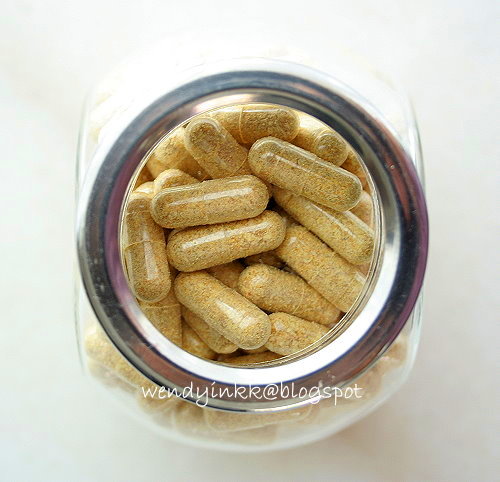