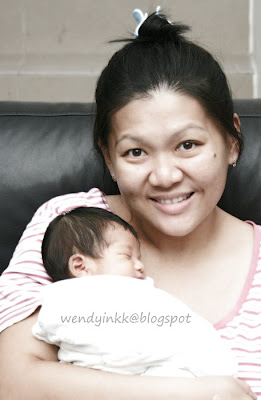 First of all, thank you for all the well wishes and concern conveyed. I truly appreciate them.

Thirdly, sorry for not posting Mr R's picture for so long. His name is actually............ not confirmed, but then again, I'll still give out the gift according to the original intended name.

Elin and Mary Ng. Please email me for mailing address.

Reuben 蔡尚文, that's his name. But my dearie is going to change them, BOTH. Sigh, it's really brain cracking.
I really loved Reuben, ever since I had Lydia, if she had been a boy, I would've wanted to name her Reuben, which meant "First Son", but she is a girl. So, when I finally got a boy, I wanted Reuben. But alas, few days back, I realized, when combined with his surname, he could be given a very vulgar nickname in Cantonese. Something that I truly want to avoid. So, had to settle for another name. We still have  5 days to dateline to name him and hopefully we will be able to come up with it.


Now, since he will not be called Reuben, Let's call him Di-di, which meant little brother in Chinese, until he gets his name. 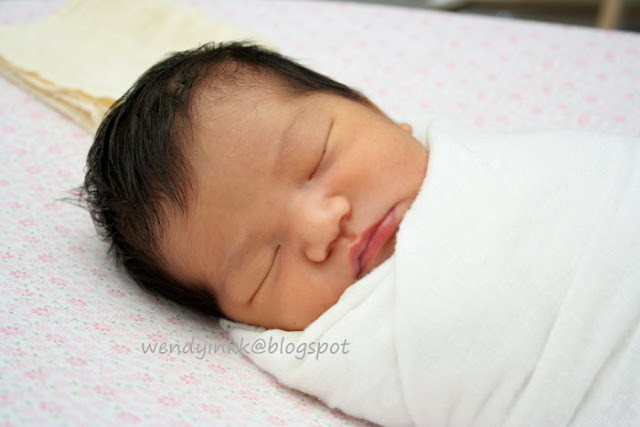 Di-di was good to me. The day I was supposed to be induced, June 1, I was dilated and having mild contractions(detected on the CTG), very very much to my delight! The doctor wanted to burst my water bag and put me on drip to induce me. I told him, "No". Being a third timer, haha, I knew what I want. I told him, I want to wait since I'm already dilated and contracting. And so, he only inserted a tablet in me to help with dilation and allowed me to wait...... it was 830am.


3pm, Doc came and checked my dilation, going on very well. He wanted to burst my bag again, I said no! I was having contractions, every 5 minutes. Still bearable. I want the pain to slowly build up rather than come too fast too soon too quick for me to handle.


4pm, I told my hubby to call the nurse to give me Pethidine. The pain seemed to be getting worse, and I'm not holding it well. Nurse then asked me why I didn't allow doc to burst my bag at 3pm just now. She said, it might take a long time until I get into labour and will be in pain for a much longer time.


430pm, the Pethidine seems to be not working. I told the nurse. I wasn't groggy, the pain is still the same.


445pm, I asked for Gas. Pain is getting stronger.


5pm, 8cm dilated. Absolutely groggy with gas. Midwife found that my membrane was missing, so I have actually burst my own bag sometime ago. Well as you all know, I was low on water. How would I know. I wasn't wet at all. I might have had it gone when I went to the loo.


5.21pm, Di-di came to meet the world in his birthday suit with 2 pushes! One push less than both sisters. He's 3.16kg, with his father's nose and lips.


June 6, I went back for a check up, Doc said, "Wow, everything came so smooth and quick."
I told him, "Actually the few days before I came, I ate all the forbidden foods. Watermelon, papaya, fennel, and fenugreek, all foods that will cause contractions."
Doc laughed and said, "No wonder you were 3cm dilated when you came."


Maybe it was a coincidence that I dilated. Maybe not. I was so scared to be induced by drip that I induced myself first with foods that are supposed to cause early labour. To me, it's ok, since I'm already full term, so what's with early labour? I want to go on labour!


Haha... so, that the story. I do not know if I will get complains on this article like I did for mine on Lyanne's birth. I was told behind my back that I shouldn't have written that on my blog and it was unnecessary. But then, for those who said that, Ooooopps, I did it again! LOL. 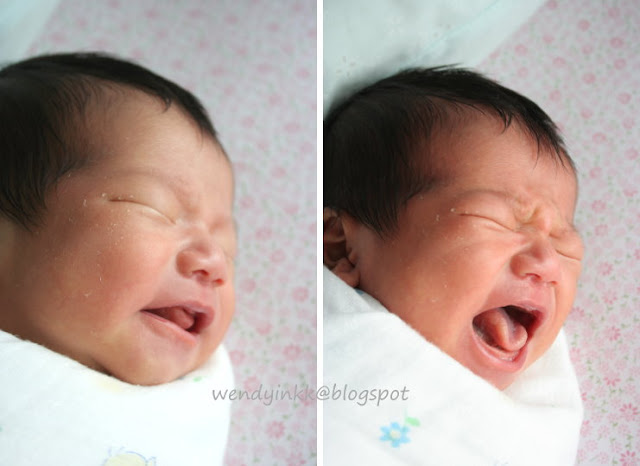 Some of you might want to know the sisters' reaction. Whether there is any sibling rivalry or jealousy.
There is none. They both love him to bits. Sometimes too much. Lyanne always want to lay her head next to Di-di, rubbing her face against his. I just worry that she'll bang her head on him, as she is famous for her "tit tou goong", which meant, steel head kungfu.
Lydia will always want to carry Di-di. So, I asked her to sit down on the couch, firmly sitting deep with back rested, and place Di-di on her lap, teaching her to support him with her arms. But one thing I do worry is that she attempts to carry him from his bouncer whenever he cries.
But so far, they both show deep affection for him, which is great. 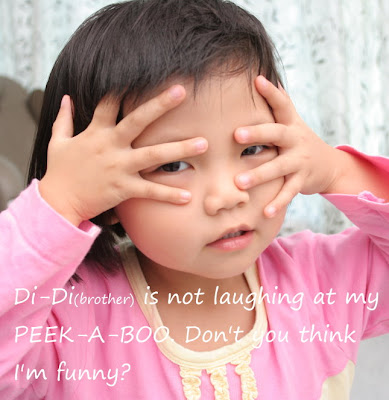 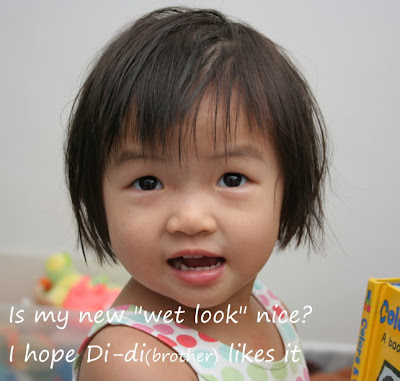 Both pictures taken the night that I came back with Di-Di.
Posted by WendyinKK at 1:22 PM

Email ThisBlogThis!Share to TwitterShare to FacebookShare to Pinterest
Labels: My Kids, Sharing