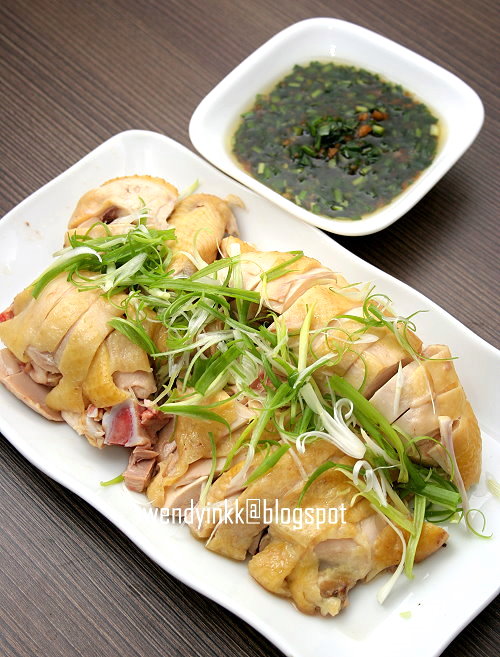 The Kwong Sai(guangxi) Chinese are mostly located in 2 places in Malaysia. First of all, North East Perak on the upper banks of Perak River and the biggest population of Kwong Sais are located in Pahang. In areas like Bentong and Raub, Kwong Sai Chinese is the main dialect group.

Kwong Sai cuisine is not much known out of these areas. Kwong Sai recipes from the internet are not the same as what is consumed by the local Kwong Sais. The local Kwongsais of which are mostly descendants of immigrants from the Rongxian county and that’s the type of Kwongsai cuisine found here.

My mom is one of them and this recipe is verbally taught to me by her. 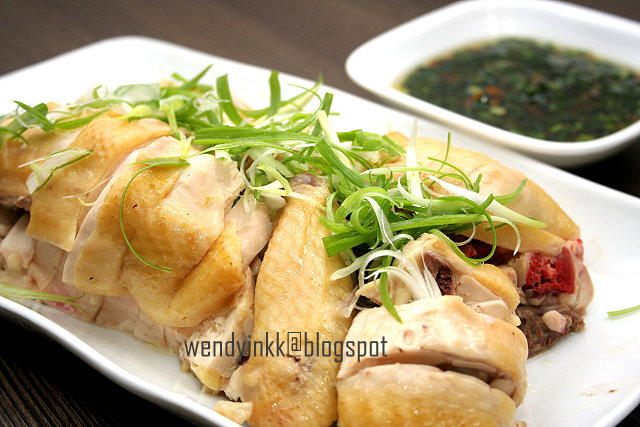 She told me the Kwong Sai love to eat steamed chicken with 'nam' (pronounced with a nasal tone). It's a festive dish that her parents will cook at every celebration. I do remember as a small kid, I saw this before at my maternal grandparents’ house. I used to hate the stench, yes, it was a stench to me. And I see my cousins dip and dip their chicken in the nam, some even spoon the sauce and eat just like that. My jaws just felt like dropping.

But now I’ve acquired the taste for Chinese chives and it’s become something really fragrant. The steamed chicken here is any other steamed chicken, and it’s the nham that makes it different, and exquisitely Kwong Sai styled.

This dish is served at local Kwong Sai restaurants in Klang Valley and and restaurants in Bentong and Raub. I don’t think you can find it elsewhere in Malaysia. This dish was also promoted during Maju Bentong Fair at Sunway Giza , June 30-July 1 2012.

﻿
﻿ Lately I have developed a love for steaming chicken in the oven. Haha, yeah, baked in fact, but it tastes like steamed because the chicken is steamed with its own moisture and so, it tastes absolutely flavourful. No flavour lost in boiling water and baking is indeed a more gentle heat compared to steaming, and the heat is also more even. The texture of the skin is also better.

You can cook the chicken whichever way you like, steam, boil or even like me, steam-bake, it doesn't matter as long as it's a white cooked chicken with the nam sauce, then it will fit the bill.

Just in case you're wondering what chicken I used today, it's an antibiotic-free chicken that I bought off the shelves at my fav grocer in Klang Valley. The bones are hard and solid, meat is firm but not hard, skin is taut and yellow, flavour is present. Not a kampung chicken, neither is this a 'wu sou gai'. A whole bird can cost around RM15-19, depending on weight, but they are big! Haha, yes, I stay in KK and buy my chicken in KL. Sometimes only, not all the time. The chicken in KK doesn't taste as good, not even the free range ones. 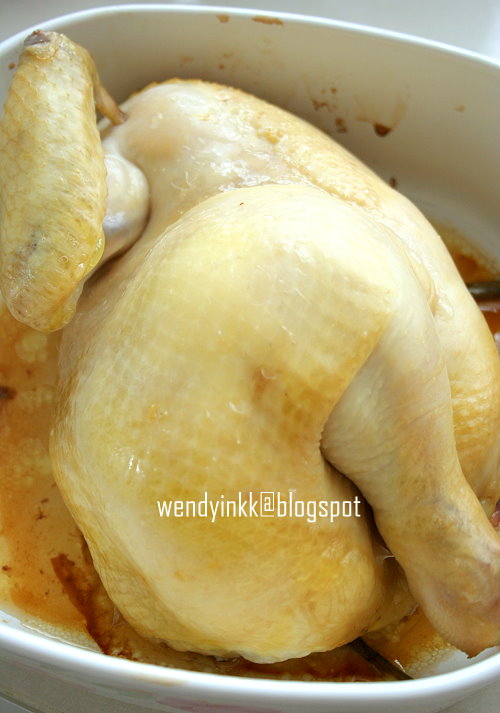 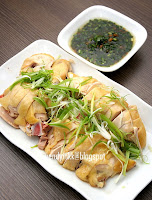 Recipe source: WendyinKK and her mom.

1. Rub salt and shaoxing wine all over chicken, inside out. Prepare an ovensafe vessel (I used Corningware) and place chicken in the vessel. Bend/fold the spring onion and place it under the chicken. Cover the vessel and bake at 160C(fan)/180C for 40 minutes. Leave it in the oven for 30 minutes and remove it from the oven (lid still on) and let it cool down. (You can steam the chicken on medium heat for 30 minutes or until done). To check for doneness, poke a chopstick into the ‘pelvic’ area of the chicken, juices should run clear. Mine is just nice with a pale tinge of pinkness but thoroughly cooked. Chop chicken when it has cooled down.
2. Wash Chinese chives, shake of the water and spread out the chives in a colander/basket. Place it under the fan and let it air dry until it's no longer wet. Slice the chives into 5-7mm lengths.
3. Peel ginger and slice into 1cm thick slices. Smash each ginger slice with the side of the cleaver. Finely chop the ginger.
4. In a dry wok/pan, put in ginger and dry fry it until it smells good. Put ginger into a heatproof bowl (just don’t use plastic). Put 2/3 of the sliced chives over the ginger.
5. Using the same wok/pan heat oil until very hot. Put in the other 1/3 of chives, gently stir it around and immediately pour this boiling oil into the raw 2/3 of chives. Let it sit for about 20 seconds then gently stir it.
6. Add in sesame oil and soy sauce.
7. Serve chicken and nam separately or you can pour the nam over the chicken. 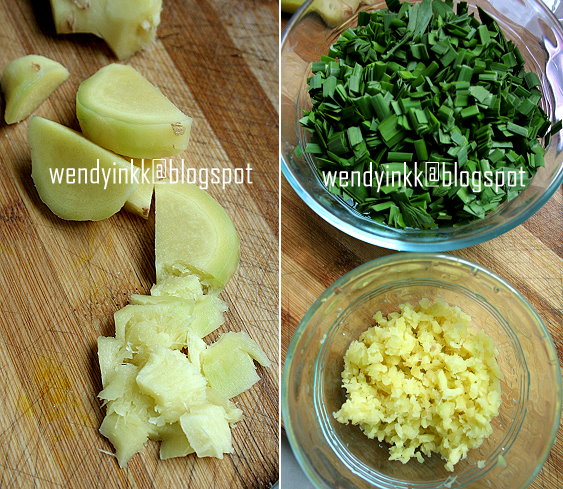 You can use any ratio of ginger to chinese chives as you like. I used 1 part ginger to 3 parts chives. The ginger must be smashed for maximum flavour release and keep the chives dry so that it doesn't slow down the cooking process due to moisture.

Some people may add shallot, some add garlic, or even some coriander and spring onion. The new generation may have used new tehcniques to make this sauce, but this is the way my maternal grandparents did it. They are born and raised in Guangxi. And as usual, because this is a household dish, the recipe may differ from one household to another, but the basic Nam recipe must contain chinese chives and ginger. Without these two, it's not Nam. Chinese chives are big in Guangxi and they even have festivals for it.

The oil used here may seem a lot, but if you pour it over the chicken, and by the time you finish  it, the oil is barely found. You need sufficient boiling oil to 'cook' the raw chinese chives. My grandpa used even more oil. 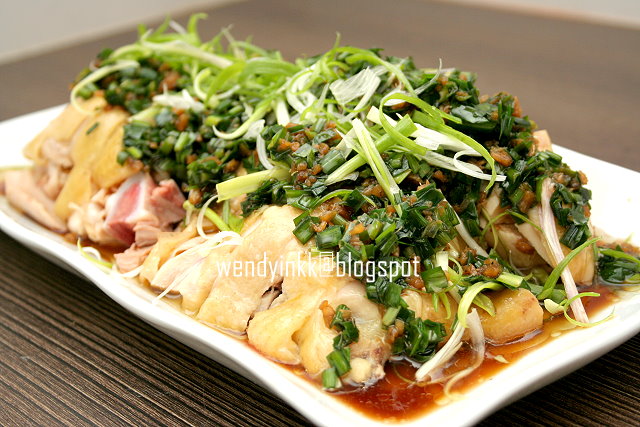 turn around for another view... hehehehe 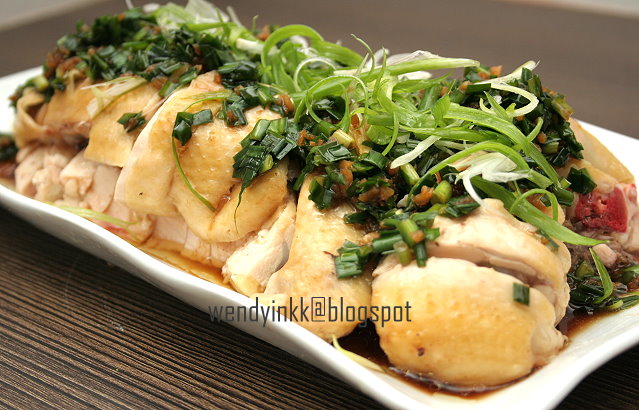