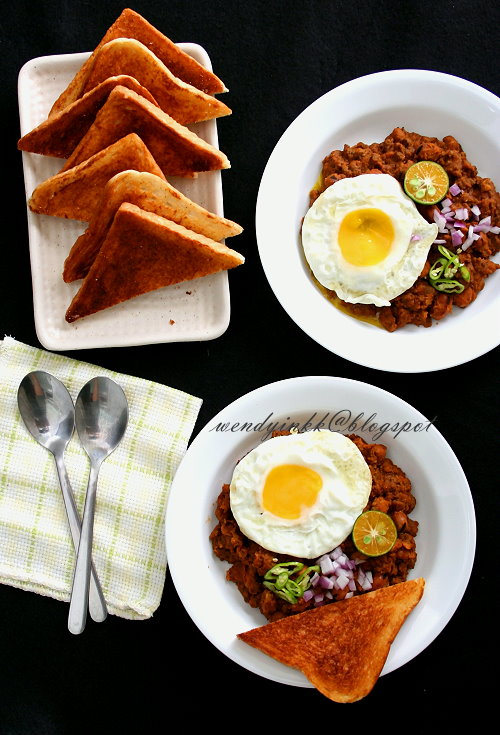 Foul Beans.... That's what stated on the can. No joke, they are foul beans.

Ok ok.. they are commonly known as fava beans or broad beans. I bought this can of fava beans from Jusco for less than RM3. I can't get them in Tesco. Not sure about other places. Initially I wanted to be ambitious and wanted to use raw beans. I used to think that these beans are common in Malaysia, but it seems that even Indian grocery shops don't carry this bean even though it's a common fare at Indian snack stalls. We fondly call those stalls as kacang putih stalls and the Indian uncle selling the snacks as kacang putih man. It's those large crispy fried beans that has a dark skin, that we usually remove before eating... that one! Yes, those beans. 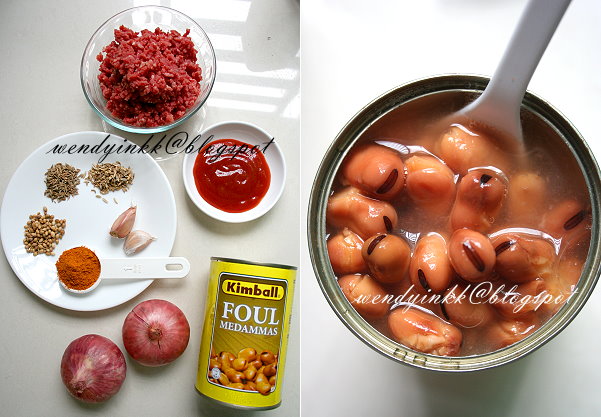 Kacang Phool ( I think it's like phone---phool) or Kacang Pool is a popular dish in Johor Bahru. It's middle eastern in origin and known as Foul Medammas (pronounced as Fool Meh-dah-mez). It originated from Egypt but is widely eaten as a breakfast item in Lebanon (with added chickpeas), Arab, Ethopia (fully mashed) and probably other countries in the middle east. Sometimes topped with an egg, or even feta cheese and tahini.

The localized version in Johor has replaced the lemon with calamansi and added in more heat with chillies and curry powder. Most of the middle eastern recipes uses cumin but fennel and coriander seem more popular for the Johor version. It's also more oniony than garlicky. Arabian flat bread is replaced with toast of which is buttered. And the biggest change of all is the addition of meat. 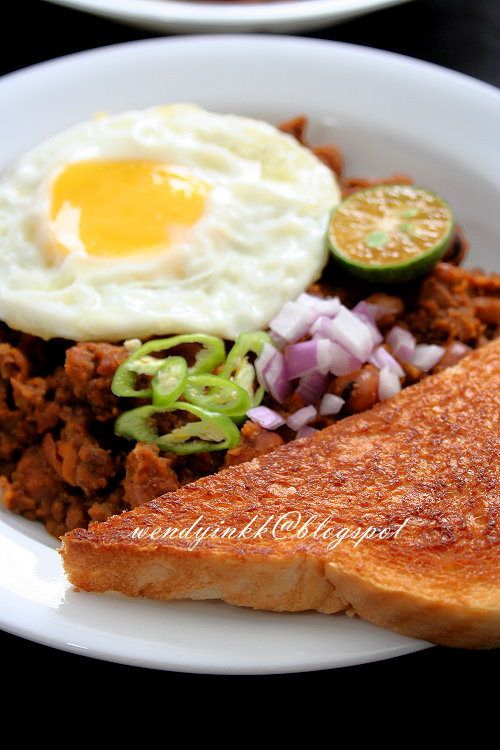 I went through a few localised recipes and found them to be greatly varied. Some called for a huge amount of beans and very little beef (7 can of beans to 200gm meat) and some called for 1kg of beef and 1kg onions with only 1 can of beans, or maybe it's a commercial super large can, but no size is stated. It's a huge variation. So I guess, there is no general ratio of beans to beef. Some called for ground spices, some don't. Some use chilli paste, and some use curry powder. Some use tomato puree, but not all. But then again, if you ask me, it's more logical for a restaurant to use more beans than meat because meat is much more expensive. Like how Arabic Zeal said it , "there's no one right way to make this dish"

After going through all the different localised recipes, I mix and matched myself a recipe that is still within the local context, to have an almost balanced amount to beef to beans, plus spices and seasonings from all the recipes I've seen. I made this for a lazy Sunday brunch and this amount can serve 2-4 depending on appetite. My hubby and I finished this off with lots of toasted bread and it was yum.

If you ask me what does this taste like.... almost like an American chilli, but less tomato-ey. That's it.

****Warning: Not to be served to individuals with G6PD deficiency****

Update: My dear reader Susan said the beans are available in Singapore at Mustaffa's. 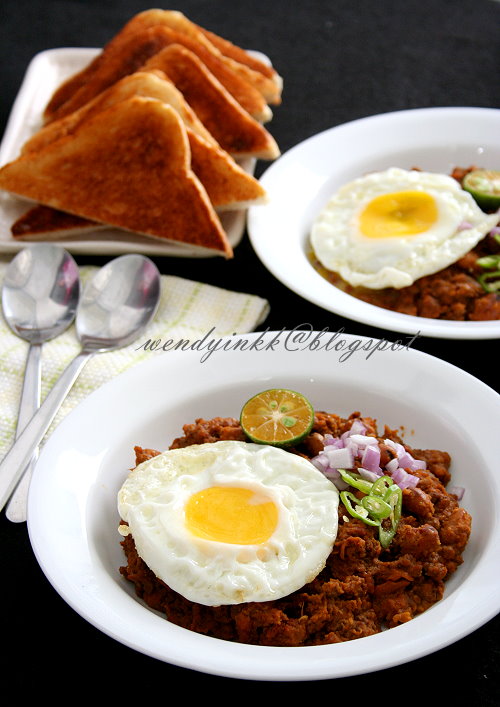 1. Put fennel, cumin and coriander seeds into a dry clean pan and on medium heat, fry until they are fragrant (they might give out some crackling sounds). Grind them fine.
2. Peel and grind onions, garlic and ginger together.
3. Pour the canned beans into a bowl and fish out half the beans and grind them until pasty. (Use some of the liquids if needed).
4. Use the same pan and heat it up. Put in 1 Tbsp of oil and sauté the meat until it is cooked and the juices are dried up. Dish up and set aside.
5. In the same pan, put in 3 Tbsp of cooking oil and sauté the onion paste on medium low heat until it looks glossy and smells good. Put in the ground spices and continue to cook for about 1-2 minutes. Put in curry powder and cook it for another minute. (If it looks dry, you may put in more oil)
6. Put in the cooked beef, turn heat to medium and continue to cook for 2-3 minutes, it should smell really good.
7. Put the beans (the whole ones) together with the liquid into the cooking beef. Put in ketchup and pepper.
8. Let it cook until it comes back to a boil, then put in the bean paste. Cook until you get the consistency that you prefer. (Add more water if you like it more stew like). Taste and adjust the saltiness. (I didn't add any salt at all)
9. Serve with a sunny side up and buttered toasted bread. 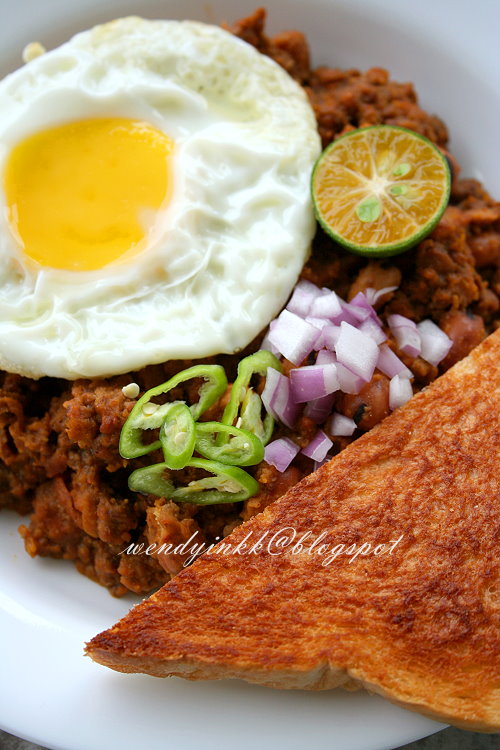 I am submitting this to Malaysian Food Fest Johor Month hosted by Annie of Annielicious Food
Posted by WendyinKK at 11:00 AM