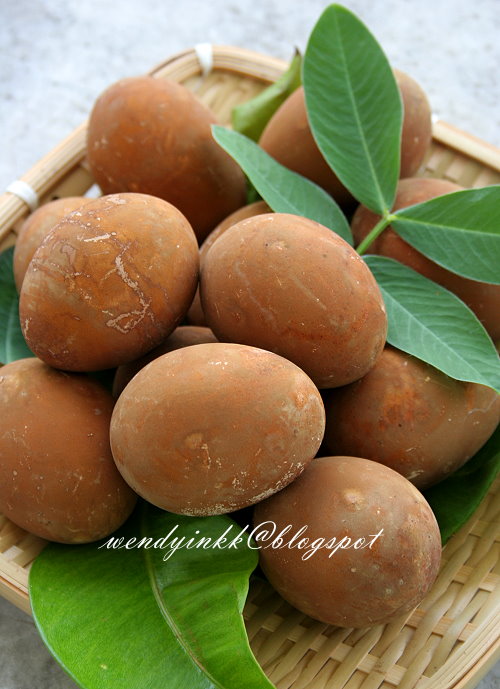 Telur pindang is a traditional delicacy of those of Javanese descent in Johor. The eggs are simmered for 3 days 3 nights in a concoction of leaves and spices, sometimes up to 7 days 7 nights. It is said to be the food of the olden day traders who travel for days because this egg could keep for 2 weeks. It is a common door gift used in Malay Weddings especially for the Johoreans, but it is used in other states too, because it is more special than regular hard boiled eggs used in Bunga Telur

I'm am used to eating braised eggs, but usually the Chinese style. Tea eggs is one of my favourites. This is something similar but not the same.

During my year in Johor, I have seen it before, but never eaten any there, because I didn't know what it was. That brown shiny egg sitting at my favourite soto stall. (wonder why mine is dull) 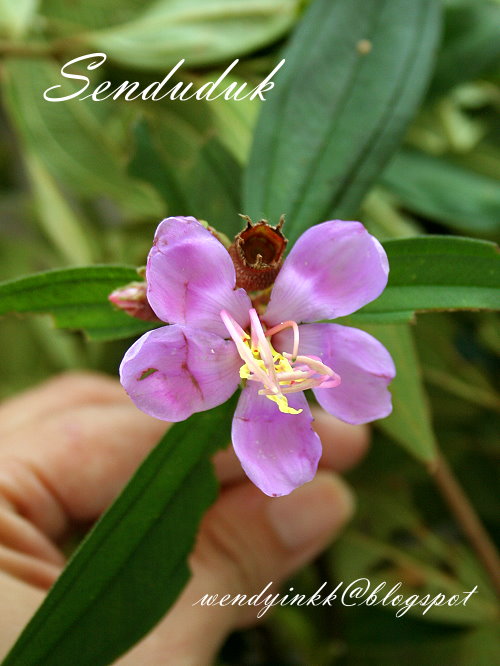 When I got to know about this dish, seeing the stuff I need to find, I was thinking to myself, "This is CRAZY". Where can I find such things? And the eggs are boiled for 3 days?

But then... as I drove along the roads each day, I then noticed that almost everything is around me, except for the mangoesteen leaves. Then I asked my hubby's staff whether she has mangoesteen at home, and she told me she has a few trees right in her yard! And so, I have found all the leaves I need.

If you look at the amount of stuff I gathered.... LOL. It's a lot! Actually I gathered too much. My pot could only accomodate this much but I gathered enough for almost 200 eggs. My kitchen patio was strewn with leaves everywhere. LOL. 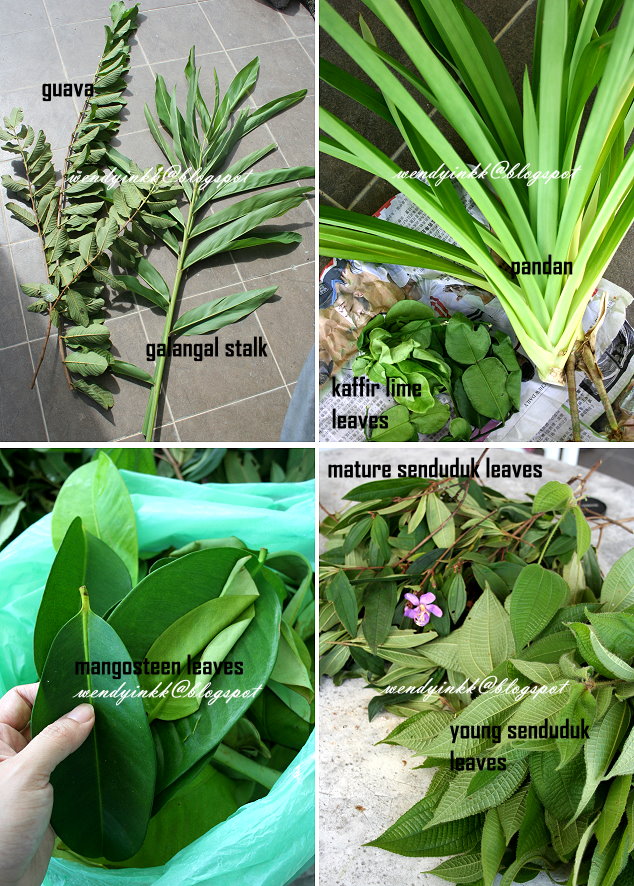 Mangoesteen - Staff's house
Senduduk- playground nearby
Guava- relative's house
Galangal stalk- Staff's house but it's found in my neighbourhood too, just that I don't have the guts to ask.
Garlic and shallot skin- FREE from grocery stores
The rest are easily found and bought

You can use other leaves like Noni, turmeric, coriander, Indonesian bay leaf, mint or any fragrant herbs, but the basic few should remain, as in the Mangoesteen, senduduk and guava as these 3 are believed to stain the eggs brown. Some even add chilli. Lots of variations on the internet. 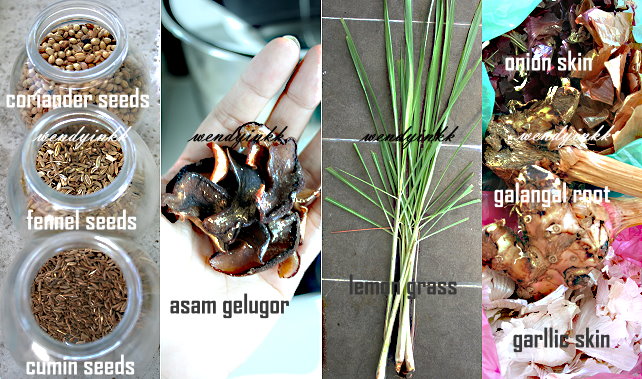 I know you want to know how this egg taste like. My hubby's staff described it as the aroma of ginger braised chicken with soy sauce. Not bitter, nothing weird. Just fragrant and savoury. That staff had a bad experience with telur pindang that looked very very dark and tasted really astringent. He was quite scared to take his first bite, but after one egg, he asked for another.

Even when the eggs are boiled for so long, you might think they taste like rubber. But no, they are not. The egg whites still taste tender. Which is kind of mind boggling, right? Tea eggs tastes more rubbery than these.

It is said that the eggs will last 2 weeks at room temperature.
It was not the same case with me. by the 4th day, the flavour diminished and 5th day, it tasted awkward.
I thought it would keep, but it wasn't the case with me. Best kept chilled after the 2nd day if you want to keep it for a long time. 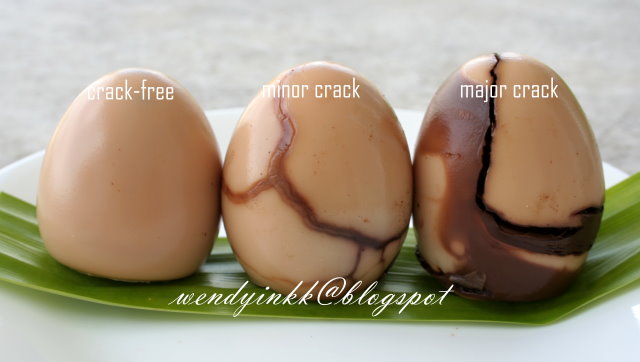 If you were to read through the recipe, the 3 days boiling is actually not continuous. It's just for a few hours each day. But does it matter?? 3 days?

First day: Colour on shell and egg white. Egg white is salty, but no aroma.
2nd day: Egg white has aroma but yolk is still like any other yolk.
3rd day: Flavour and aroma penetrates throughout the egg.

So, it's ok to take the shortcut, but the flavour will be inferior. Some people say, boil the egg without the shell for quick penetration. hmm... Maybe I'll try that next time, but not this time, because I want to be CRAZY, LOL.

1. Rinse the leaves and tear/cut them into smaller sizes if needed.
2. Rinse the eggs.
3. Arrange some of each leaves on the base of your pot.
4. Arrange eggs onto the leaves.
5. Sprinkle the spices and skins over, and some asam.
6. Repeat with the leaves, eggs and spice layering.
7. When the eggs are all arranged in the pot, cover with more leaves.
8. Put soy sauce and salt. Pour water over until it submerges all the eggs.
9. Place a plate on the top and bring to a boil.
10. Lower to a simmer for 4 hours. Turn off the heat. Let it rest.
11. The next day, bring it back to a boil and lower to a simmer for 3 hours. Turn off the heat and let it rest. Repeat this the next day too.
12. When the pot has totally cooled, fish out the eggs and wipe with kitchen paper towels. Egg is ready for distribution. 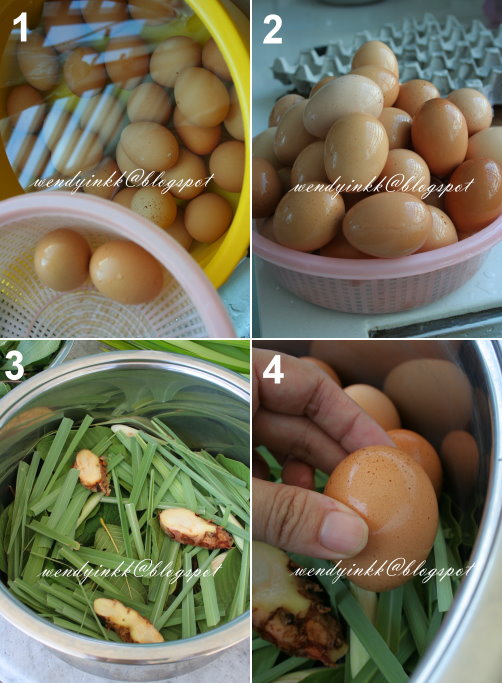 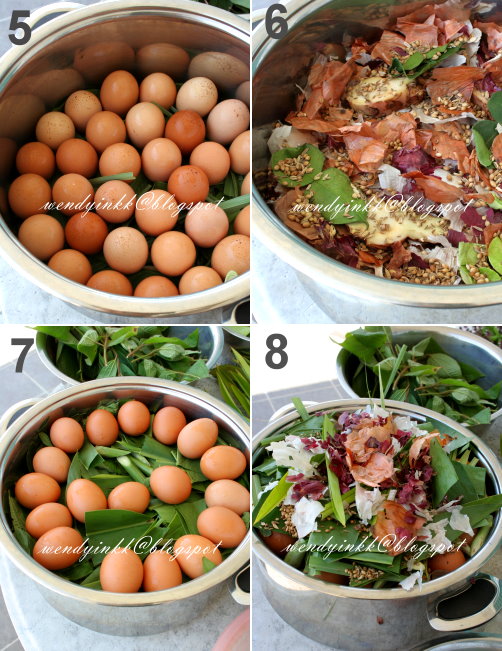 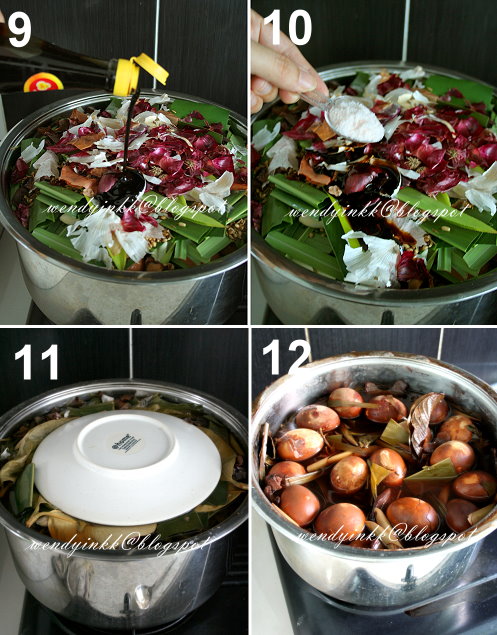 Before I end this post, I'd like to express a big thank you to my dear reader Aishah Sazali who has helped me a lot as I prepared this egg. Her dad makes these eggs to sell and she is from Johor. Thank you Aishah.