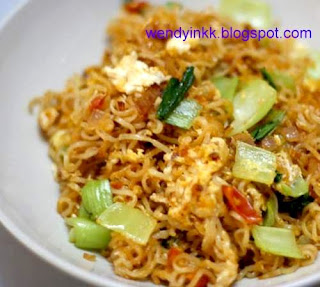 So, if one is ordering maggi goreng (fried instant noodles) at the mamak(Indian Muslim) eateries, sometimes, it may be noodles of some other brand... well, no need to be at mamak... even at home.. Maggi Meen la!!!

Different mamak shops will have different versions of maggi goreng.. and I fell in love with the first version I came across from a mamak shop called Mubaruk in Kampar. My friends and I used to go to this shop after our Girls' Brigade meetings on saturday mornings.. so, this noodle dish sort of reminds me of the good old times. I watched the mamak guy cook it..so I copied it.. hehehe

1. Boil a saucepan of water and cook noodles until just soft (it'll still retain it's square shape). Cut noodle cake in half.
2. Heat wok and put in oil.
3. Fry onion until softened, put in tomato, fry until fragrant (it'll turn mushy)
4. Put in choy sum and stir.
5. Put in cooked noodles and stir well.
6. Sprinkle in seasoning from noodle pack. Stir well.
7. Push noodles to the side of wok and break in an egg. Stir and push noodles back onto egg.
8. Stir and toss for 1-2 minutes, until noodle becomes very fragrant.

Posted by WendyinKK at 2:52 AM