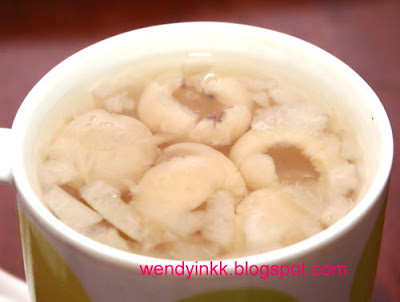 Days are hot...
Wintermelon tea is a nice drink to cool down a bit
There's this Malaysian brand of drinks called Yeo's and to me, they make the best asian beverages (in packaged form, of course)

And they do have Wintermelon Tea as well... rather pricey.. About RM4 (depends on where u buy) for half a dozen of 250ml packs.
Well, I decided to try and make mine... all for less than RM8 for 4L of Wintermelon tea or more.
To make a less sweet version, just wash (or even soak in cold water) the dried wintermelon pieces to get rid some of the sugar.. if u prefer sweeter, just leave them as they are. Don't cut on on the wintermelon if u want it less sweet, that way, u'll cut on the aroma too...
Ingredients:
3 cups dried wintermelon pieces (washed and sliced thinly to release flavour)
1/2 cup dried longan
5 L water (the dired wintermelon will soak up a lot, and you'll be left with about 4L
Method:
Bring water to a boil and put in dried longan and wintermelon slices. Simmer for 1 hour.
Strain the beverage and leave to cool before chilling in the fridge.

Posted by WendyinKK at 7:14 PM