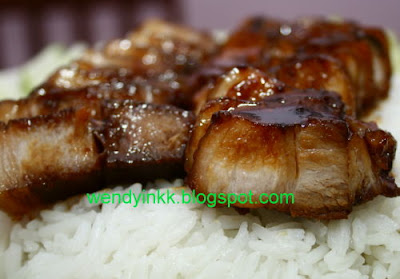 Mike's grandmother was a great cook. My mother in law told me that she used to make yummy no bake cha siew. My MIL din really learn from her, but was told by grandmother that it's simmered with soy sauce, light and dark until the oil comes out, and sweetened with sugar.

I first got the idea of making no bake cha siew from bakingmum. Then I followed that and changed a bit here and there for my cha siew pau. But the technique used then made the cha siew hard and dry. The marinating and the early addition of sugar caused the the juices to come out from the meat.

So, I used Mike's late grandmother's method to do it, no marinating, simmer and sugar in last!
The result was yummylicious! Tender and juicy!

** Use chinese soup spoon (equivalent to a baking measuring tablespoon, not the tablespoon for eating rice)

1. Put pork belly, arranged flat in a heavy based pot.
2. Put in soy sauces, salt and rose wine. Put enough water to cover pork belly.
3. Bring to a boil and lower heat to smallest flame. Cover pot and simmer belly for 30 minutes.
4. After 30 minutes, flip to simmer the other side of the belly.
5. Check belly after 20 minutes to see whether the pork fat has turned softer.
6. If not, simmer for another 10 minutes.
7. When pork belly has slightly softened, turn to high heat and add in sugar.
8. Leave pot uncovered and cook until gravy is greatly reduced to a syrupy consistency. Turn off the heat. Be careful when reducing gravy, it'll burn easily due to the high sugar content.
9. Leave cha siew in pot to cool down. When cha siew has totally cooled down, u can see there's some oil and the gravy is at the consistency of thick honey.
10. Slice cha siew (when cool,... if still hot, meat will crumble).


***** Do not leave gravy too watery when reducing. If gravy is not properly reduced, the cha siew will not be fragrant as the oil from the belly is not released. If gravy is too thick (after total cool down), put in a bit of water to thin down. U can thin down the gravy later, but do not leave it watery in step (8) 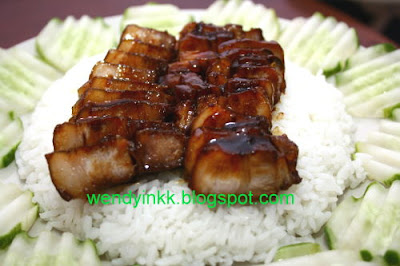 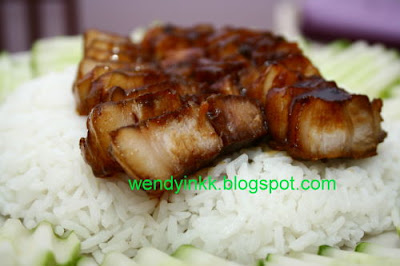 Posted by WendyinKK at 4:28 PM