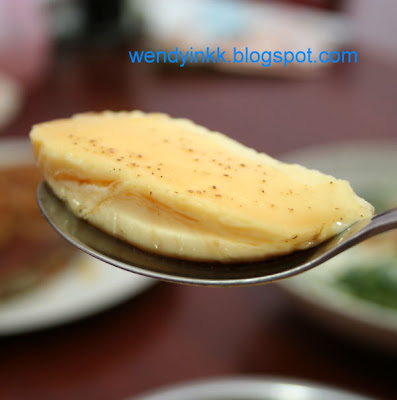 I was asked by my hubby's cousin, Elaine, whether my forte is cakes. Haha! No... It's just that lately I haven't been cooking as much as I did last time(b4 Lyanne's birth), but I still baked, and I can say, even more. Ever since I could make the darned sponge, it made me more adventurous, wanting to try to make almost anything to comes to my mind. But, not only cakes, I still have a big list of things I want to bake. I love to eat cakes and pastries, actually, love to eat almost everything. Haha! A glutton!

So, here is one dish that was saved up for backposting.... since the day of spicy pan fried mackeral.. it was made on the same day. But was wanting to post the other stuff first.

Steamed egg, one of the simplest dishes that is not that easy to make. It’s easy to beat eggs. The tough part is to steam it and get that silky texture. It's the chinese version of Chawan Mushi. You can add in century eggs, salted egg, or even minced meat. But if u're adding in minced meat, make sure u steam it on a higher temperature.

Beat eggs with salt and a few drops of sesame oil. Combine with water.
Grease a stainless steel dish with a bit of oil. Pour egg mixture into dish.
Place a steaming rack into wok, fill it with water 1cm below the steaming rack and bring the water to a boil. When water has come to a boil, reduce heat to low. Steam egg with the water barely simmering until centre of egg is no longer watery, as in solidified (not wood hard!). When egg is ready, sprinkle some pepper and a teaspoon of light soy sauce onto it.

Time is variable to your hob's heat,and the pot/wok u use to steam. Mine took me about 20 minutes.

Remember to cover the wok while steaming. 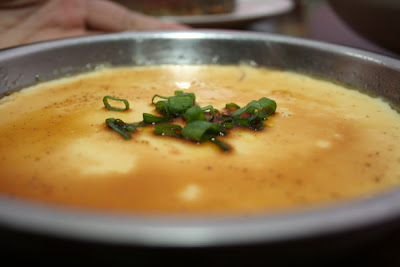