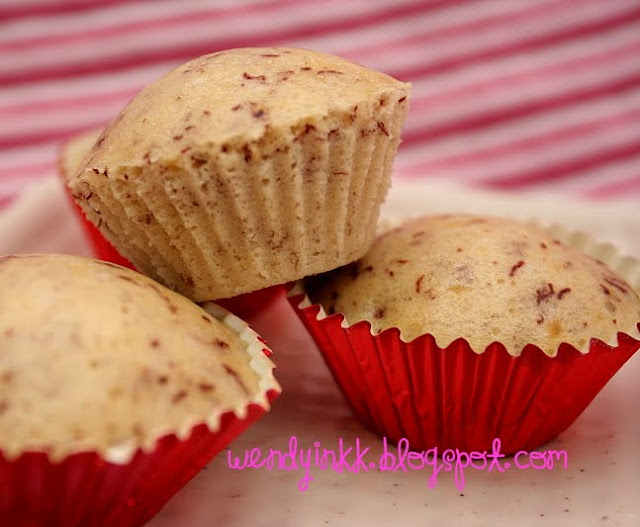 Don’t say I didn’t warn u. If u think that this is a tender soft cake, nope it is not. Not even when it's fresh from the steamer.

This doesn’t contain any oil (no yolks, no oil, no butter, what so ever)
It’s bouncy with a bite to it. I won’t say it’s dense.. not til that stage. Just that, not soft like a sponge, not dense like a brownie 

I ate another piece hours later, and still the texture was the same, same meant, no hardening, which is good for steamed cakes.
I adapted this recipe from a magazine, Happy Kitchen that my mom bought.
She buys it, I make it, as always 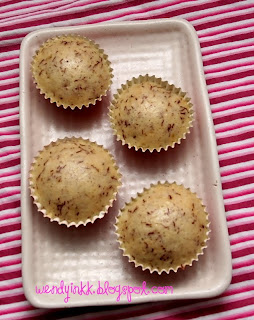 100gm bananas
60gm sugar
70gm egg white (from 2 eggs)
1 Tbsp water
80gm cake flour
20gm corn flour
1 tsp baking powder
1/3 tsp sodium bicarbonate
1. Prepare ur steamer/wok, put water in and bring to a boil.
2. Sift flours with baking powder and sodium bicarb, set aside.
3. Put bananas and sugar into bowl and beat with a mixer until mashed and creamy.
4. With a hand whisk, whisk in egg whites and water .
5. Put in sifted flours and whisk until just smooth.
6. Put batter into lined steaming cups until 90% full.
7. Steam on medium heat for 6 minutes. (As per the recipe. But I steamed my 2nd batch on high heat, and the texture was slightly softer than the 1st batch on medium heat)
The original recipe called for liquid glucose, and I omitted it, scared that it’ll make the batter too sweet. But the main reason was that, I don’t have it at home that time. Well, I could always substitute it with golden syrup that I still have lots, but nah… let’s try it without. U can add in 30gm of liquid glucose into the batter.

Maybe next time I should put in some oil or melted butter… A Tablespoon or 2, just to make it softer. 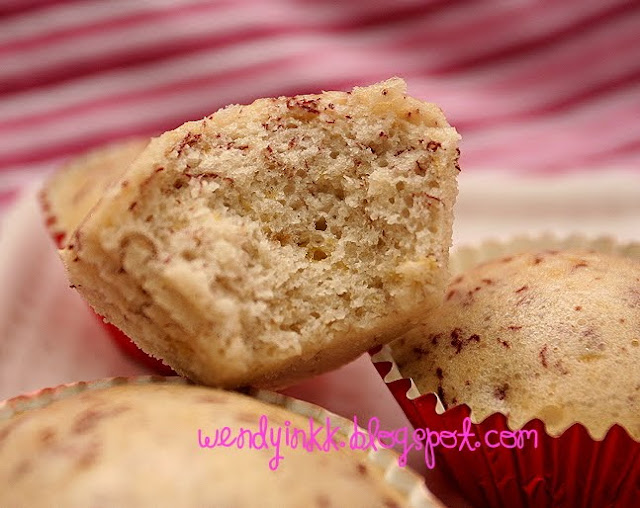 Posted by WendyinKK at 2:03 PM