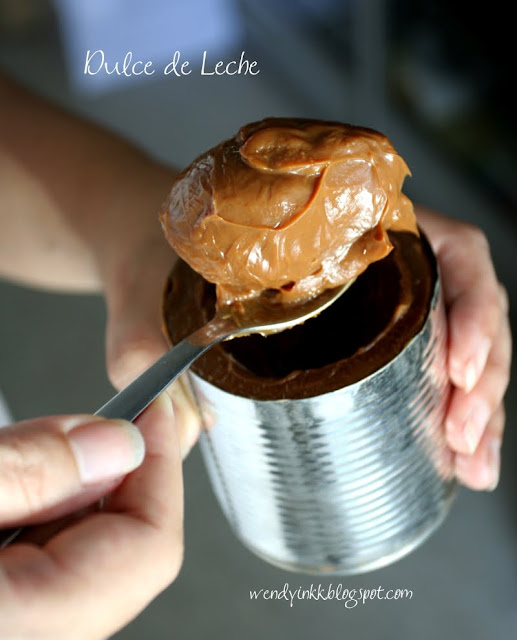 Pronounced, Dool-say De Leshay. It’s in Spanish and it means, milk caramel. You might have heard about it (U can't have missed it if u read my Dulce de Leche cake post) or you might have not. It’s not a common ingredient in the local baking scene.

So, how to make it? Few methods I’ve listed them here

Method(C)
Unopened can of condensed milk.
-I don’t see how dangerous this as, as canning is also done with unopened jars/cans in heated in boiling water for an amount of time. Just don’t leave the pot dry and the heat on. Read: http://www.mykitchensnippets.com/2008/05/dulce-de-leceh-cheesecake.html
1. Simmering a can of sweetened condensed milk for 2-3 hours http://notwithoutsalt.com/2009/09/12/dulce-de-leche/
2. Pressure Cooker : cook a can of unopened sweetened condensed milk for 30-40 minutes, everywhere on the internet.
3. Simmering in slow cooker/crockpot: http://www.mangiodasola.com/2010/01/crockpot-dulce-de-leche.html

I tried out method (C)1. Simmering the can unopened.
I’m not sure if this will work with Malaysian “palm oil based” sweetened creamers.. I might experiment making this with full cream evaporated milk and sugar next time, cos I don’t get these real milk goo everytime from Singapore.

Updated 7/3/12: There is Sweetened Condensed FILLED milk (take not it's not full cream, and it's partially made with palm oil) on the supermarket shelves in Malaysia (after this post came out). Comes in 3 brands, Teapot, Marigold and F&N. Results are acceptable, I've made DDL using these few times before, not as fragrant, but texture is there. Better than nothing, right? 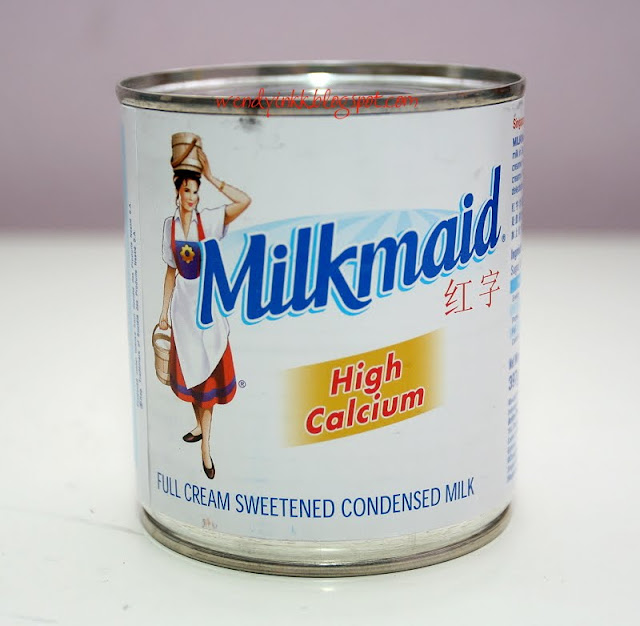 My dear Malaysian friends, you can't find "FULL CREAM SWEETENED CONDENSED MILK" on the shelves anymore. There is Milkmaid, yes, but it's Sweetened Creamer. Please scold the government for price controls which forced the manufacturers to sell us palm kernel oil creamers. Palm kernel oil is not the same as palm oil. Palm oil is the oil from the mesocarp(the outer flesh), whereas palm kernel oil is from the "nut", just like coconut oil. Oh ya, non dairy topping creams are made using palm kernel oil too. I saw that on the labels. So, I do try to use dairy or buttercream now, unless I can't avoid it but use non dairy topping cream.
Actually I prefer the non High Calcium version of this milk. Having more added calcium to it gives it a metallic taste, just like any other Hi-Calcium drinks, something that I will avoid if possible. But since this milk is a gift from Lydia's Nanny, I have no choice lor. After making it into DDL, the metallic taste is not obvious anymore. 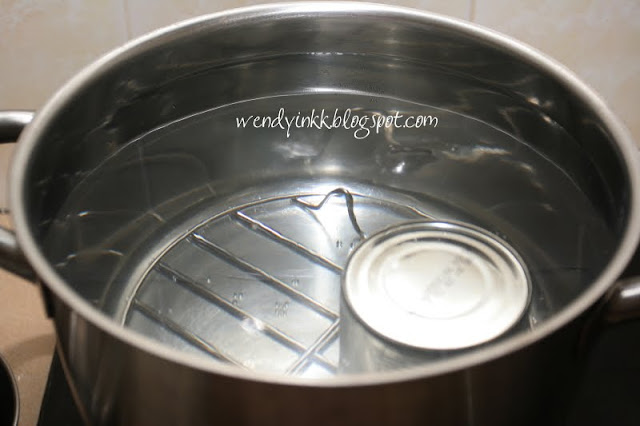 I put it in a pot, on an overturned steaming rack. Brought it to a boil (lid on) and lowered it to a simmer. I had the water 1.5 inches above the can. I simmered the can for almost 4 hours, cos I forgot about it. I was doing my blog. I was supposed to do it for 3 hours only.
Don't worry, my the pot didn't lose much water and there was still 1 cm of water over the can. As long as the pot didn't dry up, you'll be alright.
I let the can of milk cool down in the pot until the water is warm. Then I fished it out and let the can COOL COMPLETELY before opening it. Do not attempt to open a hot or warm can!!!! 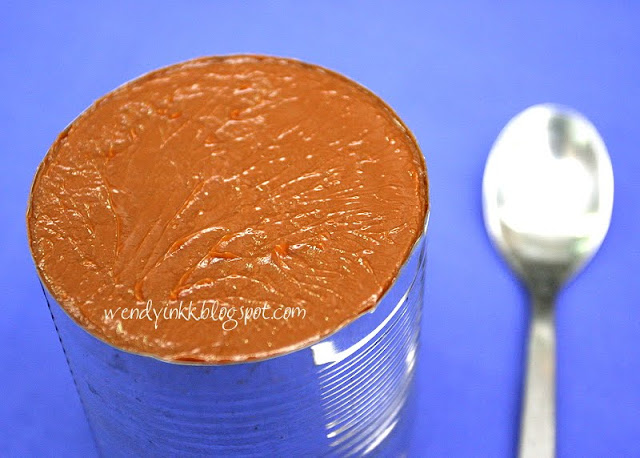 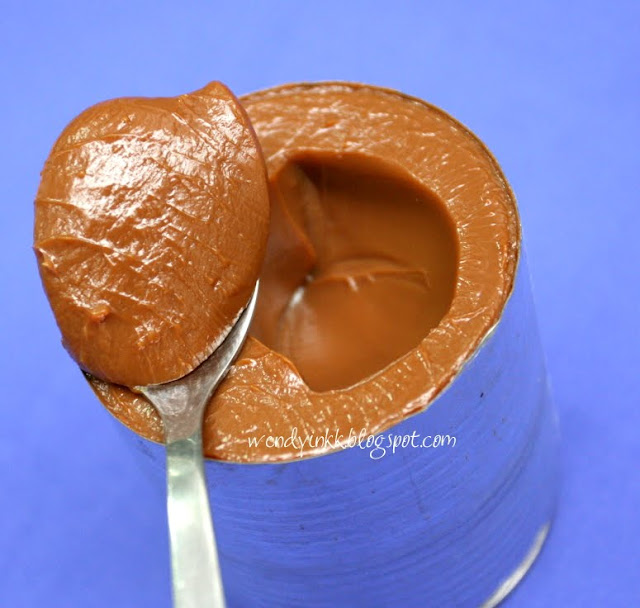 Tadaah!!! Pretty caramelly goo... Taste so good. You can use it to spread on your toast or make something with it, like what I did with my Dulce de Leche Cake. I'll do something else later, stay tuned.

I read from the internet that the best Dulce De Leche are made from Goat’s Milk and.. they’re from Argentina. If only someone would send me some… I won’t mind if it’s from somewhere else other than Argentina , as long as it’s dulce de leche. Canned ones like Nestle are gladly welcomed too 
I’ll send u something in return.
Posted by WendyinKK at 3:07 PM