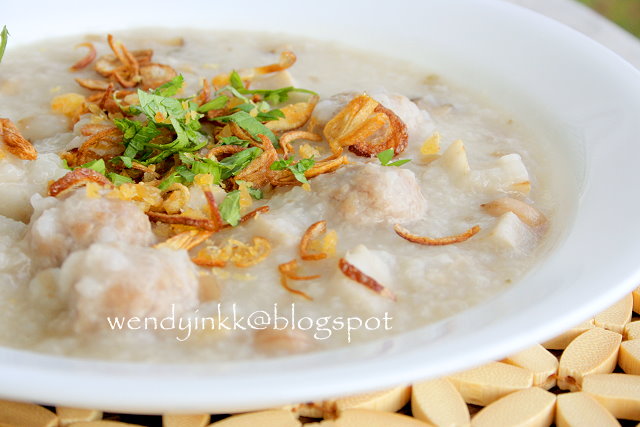 I truly regretted not cooking more of this. It’s the absolute must try for taro cake lovers, or what you may call as yam cake lovers.

Peng is such a genius to think of transforming the taro cake into porridge form. Seriously! I love going to her blog to get inspirations for everyday dishes. She’s got lots of good recipes, with some combinations that I have never ever seen before and all her recipes that I've tried all taste good to me.
Well, I know that cooking is unlike baking, where one can just throw in whatever you like. But, it has to mingle well. Cooking is like wearing clothes, you need the right combination and pairing. Not all flavours work well together. Although edible, but it may not necessarily taste nice. But Peng’s ingenious pairing and combinations always brings the “ooo” and “ahh” out of me.

I may have changed the recipe, but all credits to her for the idea. 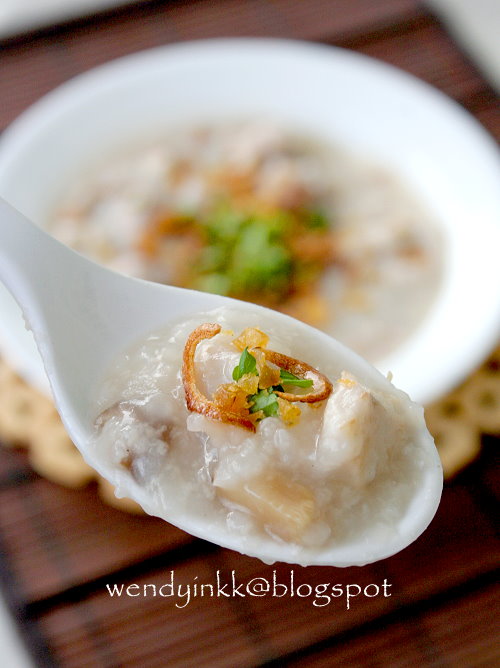 Just make it the way you like your taro cake to be. I like mine to be filled with lots of “liao”. With mushrooms, taitowchoy (salted big head vegetable), dried shrimp, pork, peanuts, lots of fried shallots and Chinese celery instead of spring onion. Somehow I feel that Chinese celery makes the flavour combination nicer, after eating Talam Berlauk(it’s something like Taro Cake, but Malay version) made by a Malay lady in Selancar.

I tell you, this is kick ass good! That is if you love Taro cake. Thanks again Peng :) 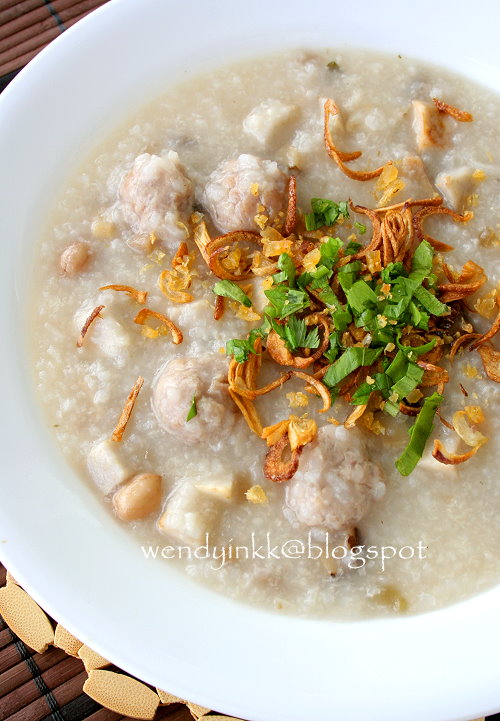 1. Soak peanuts for few hours. Rinse and put into the pot together with water. Rinse the TTC and finely chop. Put TTC into the pot. Bring to a boil and simmer for 2 hours or until the peanuts are almost soft.
2. Meanwhile, wash rice, drain and set it aside (washing it early will quicken the disintegration)
3. Meanwhile, rinse(do not soak) the dried shrimp, drain well, chop it, spread it out on a plate and place it near the cooking pot (the hot air will dry it and prevent flies). Soak and chop the mushrooms, put into the boiling pot. Marinate the minced meat (recipe below), form meat balls and keep in the fridge. Peel and thinly slice the shallots. Peel and cube taro.
4. Heat a wok, put in oil and on medium low heat, fry shallots until golden. Carefully drain the oil and set the shallot aside. With the oil still in wok, fry taro cubes until a crust forms. Drain carefully and dish up, set aside. With oil in wok (add more if it went dry), sauté dried shrimp until fragrant and crispy. Dish up and set aside. (sequence to note: shallot--taro--dried shrimp)
5. When the peanuts is almost soft, put in the washed rice. Let it cook until it disintergrates.
6. Put in meatballs and bring to a boil. Put in fried taro cubes and cook for another 10 minutes on HIGH HEAT. Taste and season with salt, pepper and sugar (or stock powder). Put in sesame oil.
7. Serve with fried shallots, crispy dried shrimp and chopped Chinese celery.

Combine everything together and form small balls. Chill until time to cook.

Posted by WendyinKK at 3:08 PM