What is amaranth? Some Malaysians may not know.

What is bayam? We know.

Bayam is edible Amaranth (Amaranthus tricolor, A. gangeticus, A. oleraceus, A. mangostanus ) lor! Hmmm..some may call it spinach, but spinach is Spinacia oleracea. Well, some call bayam as Chinese Spinach, but in Wikipedia, Chinese Spinach can also be Kangkung(Ipomoea aquatica) and Malabar Spinach or as Malaysian call it as Emperor's Shoots (Basella alba)

For those that can understand cantonese, what do u think is spinach then.....? In Cantonese Spinacia oleracea is Por Choy, and edible amaranth is Yeen Choy, Kangkung is Ong Choy and not forgetting Malabar Spinach is Charn Choy or Tai Wong Choy too.

For those that cannot understand cantonese, just a look at the scientific name and make ur verdict.

Ok, enough said about spinach. This page is about edible Amaranth.

So, here's a picture of my soup 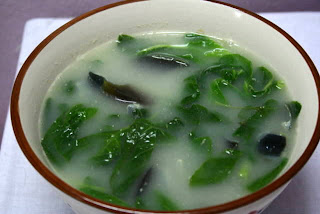 It does look a bit murky, due to the century eggs. My hubby loves this soup.

Ingredients:
A bunch of Amaranth (about 150-200 gm before trimming)
A handful, abt half cup of cleaned anchovies (bilis, I used Terengganu large anchovies, really yummy)
1 tbsp oil
1 century egg (cut into 8 pcs)
3 cups water (water will be reduced when simmering bilis)
1/2 tsp salt

Method:
1. Heat a saucepan, put in oil and saute the anchovies for a while and put in water. Boil, cover and turn low heat simmer for at least 15 minutes.
2. Take out the boiled anchovies. (U can retain them if u want, but they're rather tasteless already)
3. Put in trimmed Amaranth and boil for a minute or 2 depending on size of plant, baby bayam will need less time. Add salt and taste.
4. Put in century egg and boil for another minute. (this makes it murky, but it taste better)
5. Place soup in a bowl and serve.
Posted by WendyinKK at 10:56 AM