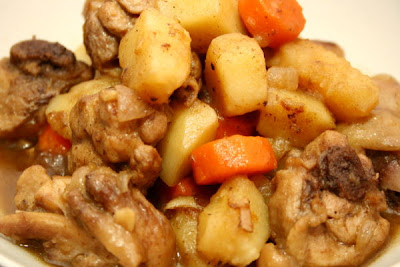 Went to Camp Cameron during my 1st year in Uni. It was a 3 weeks thing organized by SUFES, a Christian body. The camp cook made this chicken stew that was yummy, she named it chicken stew, but it tasted Chinese instead. Well, who cares as long as it’s yummy. I just wanted to recreate the taste, and it is similar.

1. Heat wok and put in oil.
2. Saute onion and garlic until fragrant, put in chicken and stir.
3. Lightly brown meat and put in carrot and potatoes. Stir fry for a minute.
4. Put in enough water to cover over chicken and potatoes. Put in light soy sauce.
5. Leave to simmer until potatoes are cooked.
6. Reduce gravy and cook until the potato thickens the gravy. Put in dark soy sauce, sugar and season with salt and pepper to taste.
7. Dish up and serve.

** do not put in salt too early as the potato will absorb it all, leaving the chicken bland and potatoes salty. 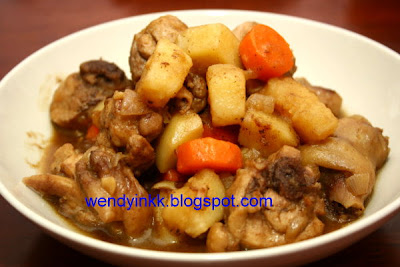