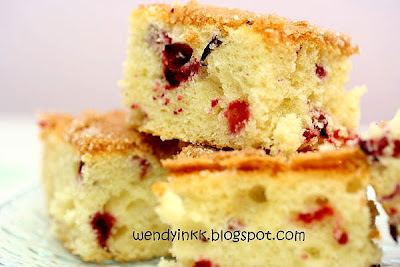 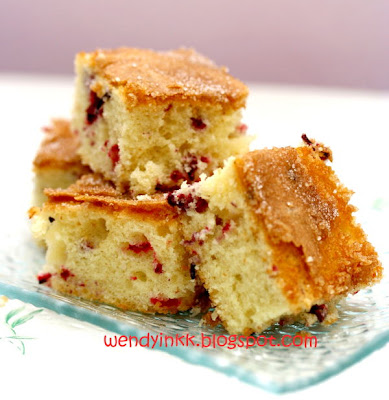 Roselle, or some may call it Rosella or even Hibiscus. And some malaysians call it Ribena Flower, because it can be used to make a red coloured cordial that taste a bit like Ribena, due to the tartness. Roselle is from the same family as the Malaysia national flower (Hibiscus) and the okra, which is Malvaceae. And what is used here, is not the fruit, but the calyx. It's just like the green fingers that hold the rose bud, the green fingers form the calyx. What is in the roselle is the ovary or seed pod, and the seed pod is used to derive pectin, used in jams.

Mike's cousin bought 1kg of roselle at the Sunday Farmer's Market in Kuala Kangsar, so, I asked her for some. 1 kg is alot!!!!! I took about 18 roselles, and it was almost 100gm. Tried making some of it into a drink, and the balance, why not search for a rhubarb recipe and adapt to my roselles..... they're both tart and pink (roselle's a darker pink of course, almost red)

After tasting this cake, I found that baked roselles taste like dried sweetened cranberries. Hmm, maybe next time I'll use roselle to substitute cranberries to bake my white chocolate cookies, and roselle's much cheaper than cranberries here.

1. Peel the calyx from the roselle. Discard seed pod. Snip into small pieces and mix with 1 Tbsp flour. Set aside.
2. Combine ingredients in (B) to make cinnamon sugar. Set aside.
3. Preheat oven to 170C(convection)/180C (conventional)
4. Sift flour with baking soda (sodium bicarbonate)
5. Beat butter and sugar until pale and fluffy.
6. Add in egg and combine well.
7. Put in vanilla essence and yoghurt. Mix well.
8. Fold in sifted flour into batter.
9. Sprinkle in floured roselles and give it a gentle mix.
10. Pour batter into a lined baking pan (that fills the batter at 1 inch height).
11. Sprinkle (2) onto batter and bake for 30 minutes or until golden brown.


The sugar topping is fragile after baked ..... Giving it a light crunch... 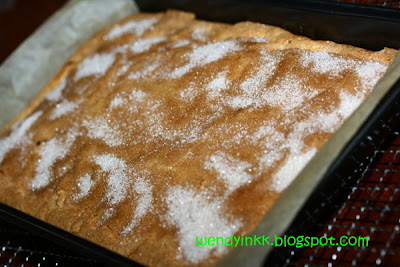 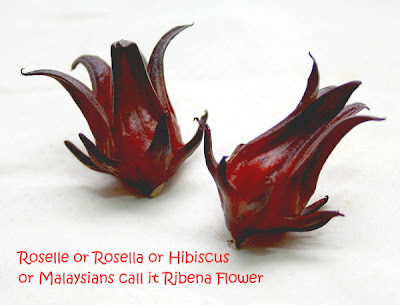 Posted by WendyinKK at 2:54 PM