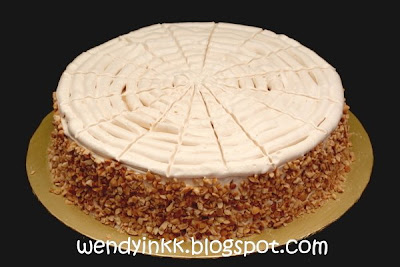 So I made a coffee sponge for her. I was so happy when the cake came out good and nice. I carefully sliced it into 3 and kept it covered because it was time to fetch Lydia from her nanny.
When she came back, she didn't realise there was this cake on the table, covered. I guess it was safe from her. But not long after that, w/o me realising it, she took one slice of the layers and chomped on it!!!

Blood rushed up to my head!!!
I was furious! But kept calm. So furious that tears were bursting out from my eyes, but was trying very hard to hold back. So intense were the emotions that my head felt dizzy... Mike saw it and told me to make another layer while he looks after the kids. I sat there not knowing what to do as there were no more coffee paste, and the last bit I was saving it for the frosting. So, I made a chocolate layer in the end.

So, from a 3 layered coffee sponge, it became Coffee-Choc-Coffee....Mocha!

It was my fault, anyway, should've put it even higher, totally out of her reach. Anything covered on the table can be uncovered by her.

Lydia, Lydia, how I wish sometimes u are not such a big foodie!! Haha!!
Posted by WendyinKK at 1:45 PM