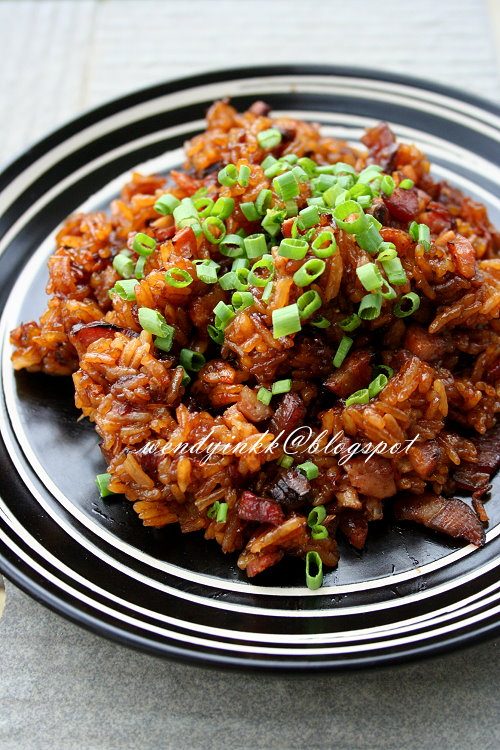 I was infected by fellow blogger Bee Bee to cook glutinous rice. I saw her mouthwatering picture on Facebook and I just just just have to have some the next day. I can't have it on the same day as the rice needs some time to soak, and I already had my meals planned out that day.

This dish is tedious to do..but worth the effort. I hate slicing shallots and waxed meat is not that easy to cut, especially waxed duck. I made this small portion for family consumption, and posted a shot of it on FB. I didn't think much about blogging about it.  But after a few nudges from fellow friends.. okay.. I'll do it. Luckily I still have a portion of rice left for photography, LOL!

Facebook is a contagious thing. It spreads calories, LOL.
I hope that my fellow FB friends will like it as much as I do. 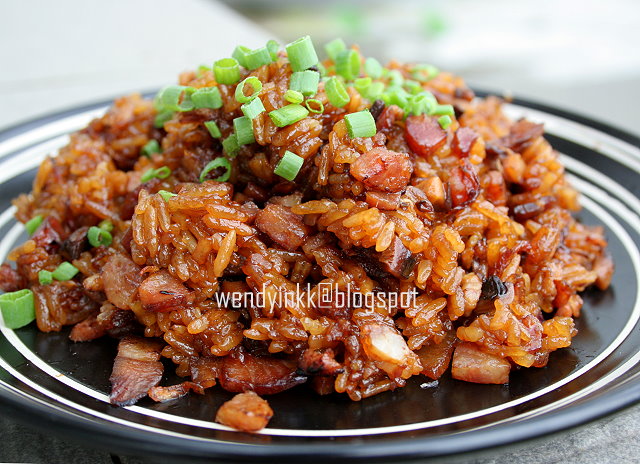 This year for Lunar New Year, I made a big portion for my Form 6 buddies who came visiting on Day 4. I cut the waxed meat until blisters almost grew on the part where the knife is applying pressure to my hands.
Luckily I prepared the waxed meat 2 days in advance. My hands had time to recuperate.

The rice was very well recieved by them. Worth the effort.
Will I make this for them again?
LOL,  Yes, but maybe not with waxed duck for large portions, small portion is still ok.

I like my glutinous rice with some spring onions. It cuts the greasiness as I eat. It's just my personal preference and my husband's too.

Preparation
1. Soak glutinous rice for at least an hour (I soaked it overnight). Soak chinese mushrooms.
2. Drain the rice and let it drip dry in a colander and proceed to step 3
3. Boil a saucepan of water.
4. Meanwhile soak dried shrimps. Rinse Chinese sausage.
5. When water has boiled, put in waxed duck and let it ‘bathe’ it in for 30 seconds, making sure every part is being boiled. Pour away the water and let it air dry.
6. Peel shallots and finely slice them.
7. Squeeze mushrooms dry and finely dice them, about 5mm cubes.
8. Thinly slice waxed meat.
9. Peel skin off sausage and cut into 4 long quarters. Slice each quarter into 2-3mm thick, forming smallish pieces.
10. When waxed duck has cooled down, cut it into small cubes, about the same size as the sausages and mushrooms.
11. Drain dried shrimp and coarsely chop them.

Cooking
12. Put all waxed meat together into wok and with medium heat, dry fry them until they start to caramelize, smell wonderfully good, and ooze oil (there might be some smoke). Turn off the heat, push them to the side and let the oil drip down. Scoop up the waxed meat, drain them on paper towels.
13. Wipe wok dry with paper towel to remove the oil from the waxed meat.
14. Put in 3 tbsp of cooking oil* and then sauté shallots until golden. Drain and dish up,
15. With the same oil, on high heat, sauté dried shrimp until fragrant, almost golden,and then put in mushrooms and sauté for about 10 seconds. Put in rice and toss everything until well incorporated.
16. Put in seasonings and toss for another minute or 2. (Taste it, it should be slightly undersalted) Put in waxed meat. And toss it for another 30 seconds or so. Turn off the heat and put in half the shallots and give it a good toss to incorporate.
17. Transfer everything in the wok to a microwave safe vessel. Pour in boiling water, sufficient to cover the rice.(same level with rice).
18. Zap on high for 10 minutes. Leave it to sit for 10 minutes.**
19. Fluff rice with chopstick and zap again for another 4 minutes. Put in balance of fried shallots and gently toss the rice with chopsticks
20. Serve with some green onions.

*You can choose to use the waxed meat oil instead of removing them at step #13
**Rice can be steamed instead of microwaved. If you have a rice cooker with steaming function, you can use that too. 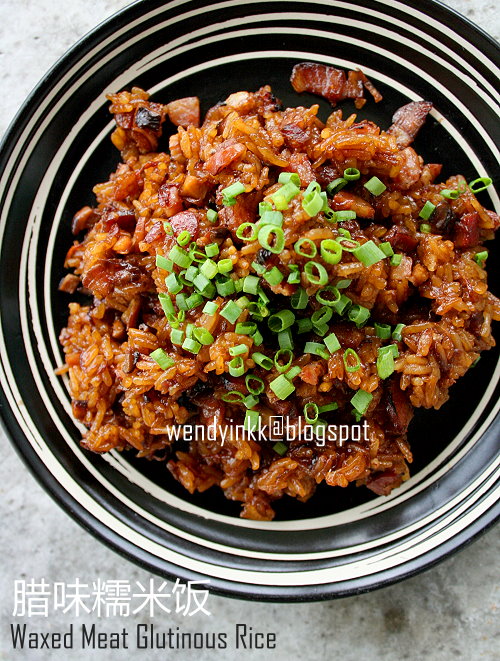